Data May Lift the Veil of Pessimism

We will learn a lot more about the economy and the Fed’s policy stance in a short 3-day window at the end of this month – our first look at third quarter GDP growth on Wednesday morning, October 30,  followed a few hours later by the Fed’s latest interest rate decision, and on Friday by the employment data for October which will give us a peek into how the fourth quarter is beginning.  In the wake of all that news we are likely to conclude that the economy is not in danger of slipping into recession any time soon, and that the Fed’s recent rate cutting initiative has come to an end.

Third quarter GDP growth is likely to be around the 2.0% mark.  The consensus seems to be 1.9%.  Our own estimate is 2.3%.  From that report we should not learn much that we do not already know.  Growth overall is at a moderate pace, but it is uneven.  The manufacturing sector remains in a trade-induced slump which may have been exacerbated by the General Motors strike in September.  But any strike-related softness will be short-lived as production rebounds post-strike.  The factory weakness will be countered by consumer spending which should continue at a vibrant 3.0% pace.

The lingering question is whether slow growth overseas and weakness in manufacturing will bleed into the rest of the economy.  The group of economists that anticipate a growth slowdown will likely maintain their view that the slump will begin sometime in 2020.  The optimists (like us) who anticipate 2.4% GDP growth next year will counter with the notion that the manufacturing sector is a small part of the economy (11% of GDP) and any spillover will be minimal.

Later that day the Federal Reserve will conclude its 2-day FOMC meeting.  We expect the Fed to cut rates one last time which would lower the funds rate range to 1.5-1.75%.  We do not believe the Fed needed to cut rates when it started down that track in July.  At the time the funds rate was 2.4%, the core CPI was expanding at a 2.2% pace. so the real funds rate was +0.2% — not even close to the 2.5-3.0% real rate level that is typically associated with the onset of recession.     If the Fed cuts rates again at the end of this month the funds rate will dip to 1.6%, the core CPI has quickened to a 2.5% so the real funds rate will be -0.9%.   The economy does not need negative short-term interest rates.  We get those rate levels when the economy is coming out of recession and there is lots of slack – like the unemployment rate at 10.0% for example.  It is not an appropriate rate level when the economy is at full employment. 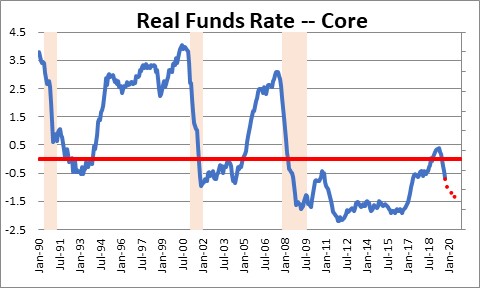 Having said all that, the Fed is likely to cut rates anyway.  It claims it is “buying insurance” in the event slow growth overseas seeps into the U.S. economy at some point down the road.  If they are “buying insurance” a 0.5% rate cut seems unlikely to do much.  A rate cut of 0.75% may not do much more but, judging from recent comments by several Fed officials, they seem inclined to do so.

If they lower rates at this meeting this is likely to be end of this cycle of rate cutting.  At its latest gathering in mid-September the most aggressive Fed rate cutters thought the funds rate should fall to 1.6% and then stay there for the next couple of years.  Hopefully, they will not be swayed by Trump’s comments that the funds rate should be at 0%.  Our sense is that at the conclusion of this meeting the Fed will convey a message that they are through cutting rates for now.

This latest rate cut may lift some of the doom and gloom regarding a growth slowdown in 2020.  Think about it.  The real funds rate has already have fallen to -0.9%, and if we are right that the Fed keeps the funds rate at 1.6% through the end of next year and the core inflation rate rises somewhat to 2.9%, the real funds rate will fall to -1.3% by the end of 2020 which is close to the level we saw for years in the wake of the recession.

At the same time a rapid pickup in defense spending is likely to add 0.5% to GDP growth in 2019 and something similar to that in 2020.  Fiscal policy is also contributing to growth.

With very stimulative monetary policy and moderately stimulative fiscal policy, the economy should do fine next year.  We anticipate GDP growth of 2.4% in 2020.

On Friday, November 1, we will get the employment report for October.  That is the first solid data point for the fourth quarter.  Our sense is that employment will climb by about 150 thousand which, while smaller than the 220 thousand average increase registered last year, remains in excess of the average monthly increase in the labor force of about 100 thousand.  What that means is that the labor market is getting progressively tighter with every passing month.  With job openings continuing to exceed the pace of hiring, and layoffs at a 50-year low, there is nothing to suggest that the tightness in the labor market is likely to change any time soon.

Between GDP, the Fed, and the employment report, we should learn a lot more about exactly where the economy is currently, and what the Fed plans to do next year.  That is obviously useful information.  If we are right, some of the veil of pessimism may finally be lifted.  As always, the current data influence our expectations for the future.