Private sector employment rose 344 thousand in November which was a disappointment to us.  We had expected an increase of 700 thousand.  However, layoffs and the number of people receiving unemployment benefits are declining steadily which means that the labor market continues to improve.  But the perception that the labor market is softening has given renewed incentive to our lawmakers in Washington to reach an agreement on some sort of a virus relief/stimulus package.  While the details of the package remain uncertain it appears to be about $900 billion and will probably extend Federal unemployment benefits of $300 per week, provide protection from evictions for renters, and an extension of the payroll protection program for small businesses.  We currently expect fourth quarter GDP growth to climb by 9.0%.  We also expect growth of 5.5% growth in the first quarter, but it is likely to be even faster if the additional government spending is approved.  Many in Congress believe this will simply be an interim bill until a larger package can be enacted early next year

The November softness in employment was experienced largely in the food services and drinking places category which fell 17 thousand in November after a sizable 192 thousand gain in the prior month.  Clearly, the rapidly spreading virus took a toll on that industry.  The other soft sector was retail employment which declined by 35 thousand in November as retailers hired fewer workers than normal at the beginning of the holiday season which compares to an increase of 95 thousand in the prior month.

But the labor market continues to improve.   In the week ending November 28 layoffs fell 75 thousand to 712 thousand.  The trend in layoffs is still downward although, admittedly, the rate of decline has slowed in the past month or so. 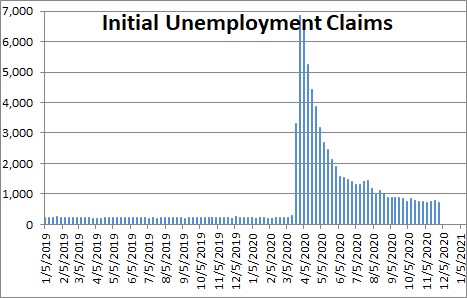 While some workers can be laid off in any given month, other workers are hired.  If hiring exceeds firing, then the number of people unemployed declines.  The Bureau of Labor Statistics each week publishes what it calls the “Insured Unemployment Rate” which calculates the number of people receiving unemployment benefits as a percent of the labor force.  It closely tracks the official unemployment rate.  That rate fell 0.4% in the week ending November 28 and has declined on average 0.3% per week for the past four weeks.  Given that the labor market continues to improve, we expect the unemployment rate to fall 0.5% in December to 6.2%. 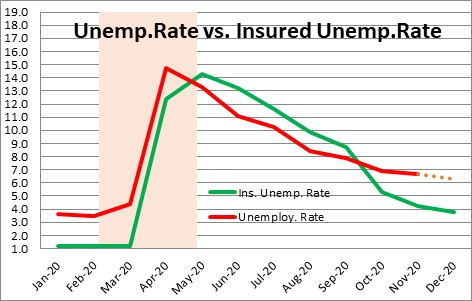 Each month employers can hire more workers and/or increase the number of hours that their existing employees work.   The “Aggregate Hours Index” is the product of those two numbers.  If we know how many people are working and how many hours they worked, we can estimate how many goods and services they produced which is what GDP is all about.  Thus, the aggregate hours index can be regarded as a rough monthly proxy for GDP.  Given the level of this index in October and November and an estimate of employment and hours worked for December, it appears that this index rose 9.0% in the fourth quarter.  Hence, we expect GDP growth in that quarter of 9.0%.  Following a 33.1% rebound in the third quarter, continuation of GDP growth at a 9.0% pace in the fourth quarter suggests that despite the faster rate of spread of the virus, businesses are still hiring and consumers are still spending. 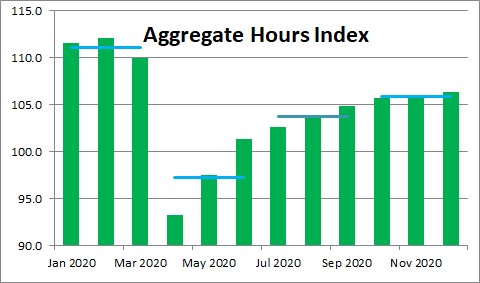 Even before the release of the November employment report Republicans and Democrats in both the House and Senate were trying to reach agreement on further government spending.  It is best characterized as a virus relief bill because the intention is to assist both those workers who remain unemployed and those small businesses that continue to struggle.  That additional $900 billion of government spending will also provide a boost to GDP growth in the early part of the year.  We currently expect GDP growth of 5.5% in the first quarter, but it could even be more rapid than that if additional spending is approved.

We continue to fret over the increase in the size of the budget deficit for fiscal 2021 and the further increase in U.S. Treasury debt outstanding.  We still believe that debt matters and hope that our leaders in Washington will soon make an effort to shrink the projected budget deficits.  But that is not going to happen.  President-elect Biden, Fed Chair Jerome Powell, and incoming Treasury Secretary Yellen are all in favor of additional spending to support the economy — even spending far beyond the “interim” package currently being discussed.  That is fine in the short time.  It will, hopefully, assist those folks who remain in need, and simultaneously stimulate GDP growth.  No wonder the stock market loves the idea!  But it may soon boost the inflation rate beyond what the Fed would like to see, and simultaneously push long-term interest rates higher.  But, for now, full speed ahead.  We will deal with those potential problems when and if they occur. 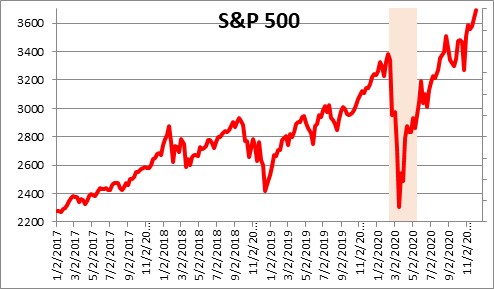