Student Loans – The Next Bubble?

Student loans continue to grow quickly and now we learn that the delinquency rate has been on the rise while delinquency rates for all other types of consumer debt have been shrinking.  Is this a bubble in the making?  We don’t think so because consumers have been downsizing all other types of credit and, as a result, debt in relation to income is at a record low level.  However, changes need to be made in the way that credit is made available so that upon graduation future students can leave school with a manageable level of debt.

With the exception of student loans all other types of consumer credit – mortgage loans, home equity loans, auto loans and credit card debt — declined rapidly throughout the recession.  These loan categories continue to contract slowly. 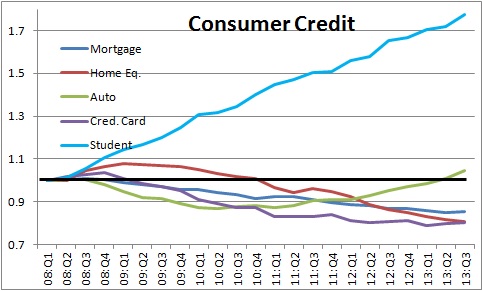 Student loans, however, are a completely different story.   They have been growing at a steamy 10-15% pace for a decade and $1.0 trillion are now outstanding.

We recently learned the delinquency rate on student loans has been rising while delinquency rates for all other types of consumer debt have been falling.  Are we seeing the early signs of an emerging bubble?  We doubt it. 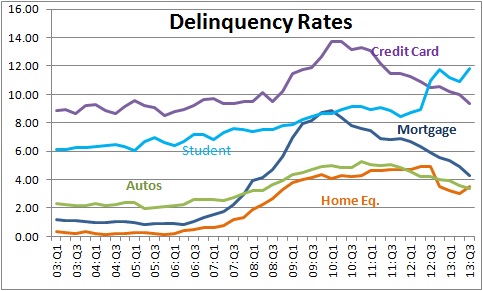 It is important to understand that while student loans have been growing rapidly and have now reached the  $1.0 trillion mark, that represents a mere 9% of all consumer credit.  The big gorilla has been, and continues to be, mortgage debt which at almost $8.0 trillion represents 70% of the $11.3 trillion of consumer debt outstanding. 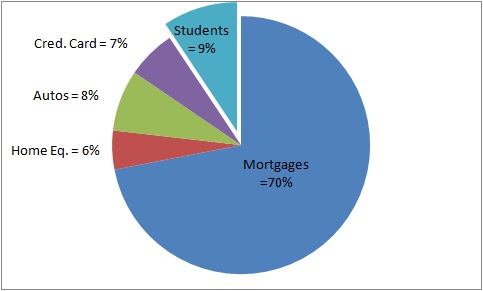 As noted above, while student loans have been growing rapidly all other types of credit have been shrinking.  As a result, total consumer debt in relation to income is the lowest in 34 years.  This aversion to debt is a good thing and consumers should be applauded for their desire to keep borrowing in check.  Consumers can easily withstand a higher level of student debt if the other four parts of the pie are shrinking.  Furthermore, if the economy continues to grow at a reasonably rapid clip for the next several years  more and better jobs will be created, the unemployment rate will continue to fall, and consumer income will climb which means that consumers can easily handle a higher level of debt – student loans or otherwise. 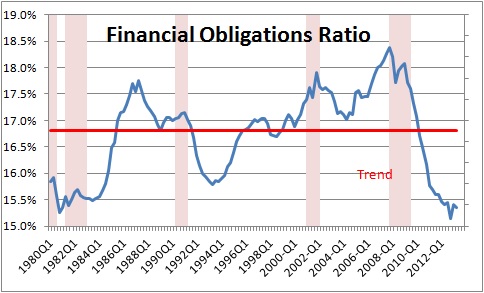 There can be little doubt that the growth in student loans in recent years reflects in part economic weakness.  Unable to find jobs after high school younger people go to college.  Unable to find jobs after college they pursue advanced degrees.  But given that student loans have been growing rapidly for more than a decade, it also seems to reflect the value that our society places on a college education and the financial rewards that are commensurate with that level of education.  It also seems to reflect an awareness that in today’s world employers demand technical skills that were unnecessary prior to the recession and that education is the means to acquire those skills.

Our problem with the student loan program is the extent to which credit is available, and the unwillingness of students to assess the marketability of their chosen major.

The overwhelming majority of students can easily qualify for a federal student loan.  The amount they can get depends only on their education level (undergraduate or graduate), and whether they are a dependent.  Nothing else matters.  Their high school academic record, income, parent’s income, credit history, and expected future income are all irrelevant.   This brings back sorrowful reminders of the sub-prime mortgage market a few years ago where money was essentially handed out to potential home owners for free.

We believe that some sort of means-testing should be implemented so that borrowing by students of wealthy parents is limited.  Expected future income should also be factored into the equation.  This is no different from a bank examining the earnings potential of a small business before deciding whether to extend a loan.

Congress occasionally raises the upper limit on student loans.  But then colleges and universities believe the student can now afford more and raise tuition to match.  The student is no better able to fund the cost of each year’s tuition and is now even deeper in debt.  Cost cutting is imperative.  College presidents’ compensation packages and expensive sports programs need to be scrutinized.  Perhaps colleges should concentrate on particular curriculums and eliminate others.

Students who need funds beyond the amount provided by federal student loans often turn to private lenders which charge much higher interest rates.  Because student loans are not discharged during bankruptcy, this means that for the” preferred lender” student  loans are largely risk free but yet they charge an average interest rate of about 7.0%.   Perhaps some sort of rate cap should be imposed.

Many of our younger people today want a degree from a prestigious university but there is no thought given to how they can afford such luxuries.  A state university might do just as well at one-third the cost.  Or they might consider a community college for the first two years to save money.

Furthermore, students who choose to major in Russian history or American folklore have got to be made aware that their job prospects upon graduation and their expected income may be insufficient to repay their cumulative student debt.

Student loans are growing rapidly, but given the pay down of other types of debt consumer borrowing in relation to income is well in check and should not pose a threat to the expansion any time in the foreseeable future.  However, student loans are far too readily available and some changes in current practices are required so that upon graduation future students can end up with a manageable level of debt.