The Economy Hits Bottom — Recovery Ahead!

Every recent indicator has confirmed that the economy has stopped dead in its tracks.  The economy was expanding nicely in January and February but the lock down measures that went into effect in mid-March were so pervasive that GDP declined 5.0% in the first quarter.  Second quarter GDP is expected to fall by 40% or more (we peg the decline at 60.0%).  Every sector of the economy has been hit — consumer spending, investment, housing, the manufacturing sector, trade.  Employment plunged.  The unemployment rate skyrocketed.  But the economy hit bottom in late May.  The recovery has begun!

Every economic indicator for March and April were consistent.  The economy fell off a cliff.  It remained weak in the first half of May.  But by mid-month the economy slowly began to reopen.  Some workers returned to work.  The data on initial unemployment claims and the number of people receiving unemployment insurance benefits suggest strongly that the economy turned upwards in mid-May.

Initial unemployment claims are an indicator of layoffs.  They began to climb in mid-March and reached a peak of 6,867 thousand in the week ending March 28.  They have fallen for eight consecutive weeks and now stand at 2,123 thousand.  Thus, the pace of layoffs is slowing, but with 2.1 million workers showing up for the first time at the unemployment office in the week ending May 23, it is clear that layoffs continue in some industries.  But this is a measure of how many people lost their jobs.  There is another piece of the equation – how many people got jobs. 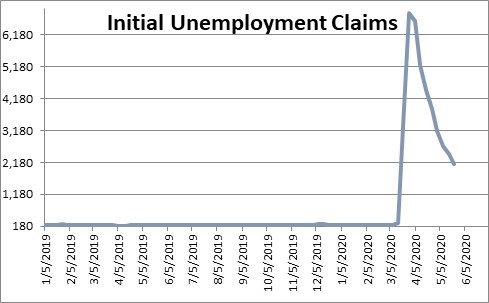 Each week some people go onto the unemployment rolls because they lost their job, but others stop receiving benefits because they found a job or were recalled to their previous position.  When the number of people receiving unemployment insurance benefit begins to fall, more people were hired in that week than lost their job.  That is exactly what happened in the week of May 16.  The number of people receiving benefits fell by 3,860 thousand to 21,052 thousand.  That is great news!  Businesses are re-opening.  America is hiring again.  And we know that from May 16 to today more states have begun to re-open so this indicator is going to drop steadily in the weeks ahead. 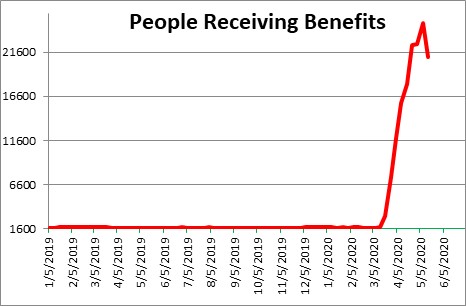 This coming Friday, June 5, we will get the employment report for May.  What does all this imply for that report?  It is important to remember that the employment statistics are determined from a survey taken in the week that includes the 12th of the month.  The number of people receiving benefits climbed each week from 18 million in mid-April to 21 million by mid-May.  So, after having lost 20.5 million jobs in April, the economy probably lost another 3.0 million jobs in May.

But the people receiving benefits data suggest that employment actually rose by 3,860 thousand in late May.  As the economy re-opens that trend should continue throughout June.  When we get the employment report for June on Thursday morning, July 2, look for an increase in jobs of 10.0 million.  If that happens the recession is over.  June will mark the first month of expansion. 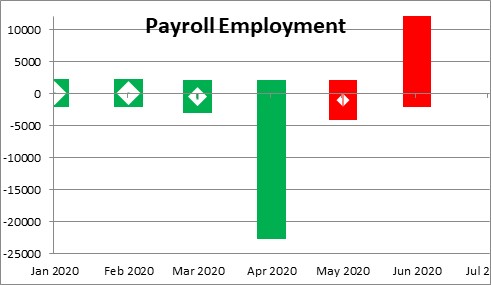 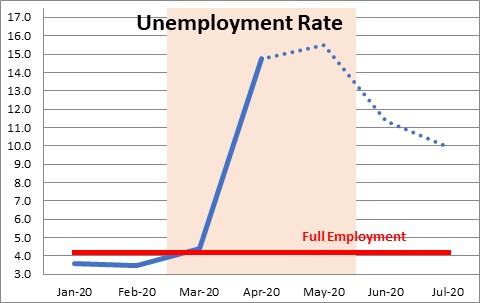 Nothing about this 3-month recession is “normal”.  The recession was not caused by the virus.  It was triggered by our government’s response to the virus.  One can debate whether the government’s response was the appropriate course of action, but the reality is that action by our leaders both in Washington and at the state and local level caused the recession.  It is equally true that the government’s response to the economic fallout in the form of fiscal stimulus and Fed action will be the catalysts for a speedy recovery  We continue to expect second quarter GDP to fall by an unprecedented 60.0%, but then GDP should rebound by an equally impressive 61% in the third quarter before settling in at a 7.0% growth rate in the fourth quarter..

So hang tough.  The employment report for May and virtually every other May economic indicator (released throughout the month of June) will continue to look anemic.  But by Thursday morning, July 2, the world will look quite different once we get the employment data for June.  Happy 4th of July!