The Manufacturing Sector is Weak, Not the Economy

Every indicator related to manufacturing has been steadily weakening for a year –durable goods orders, industrial production, and the purchasing managers index.  As the drumbeat of bad factory news continues there is a temptation to conclude that the overall economy is weak.  That is not quite accurate.  It is important to remember that the manufacturing sector is 11% of the GDP pie.  The rest of the economy is doing fine.

Perhaps the best way to highlight the dichotomy between manufacturing and everything else is to examine monthly indices released by the Institute for Supply Management (ISM). Each month this organization asks purchasing and supply executives nationwide about orders, production, employment, and prices.  It tabulates the responses and produces a monthly index that gauges the health of the manufacturing sector. 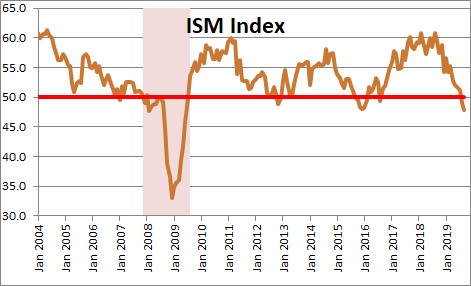 This series peaked at 60.8 in August of last year and has been in a downward spiral for a year to 47.8 in September.  The breakeven point is 50.0.  Above 50.0 the factory sector is expanding.  Below 50.0 it is contracting.  Thus, the rate of growth in the factory sector has been gradually slowing throughout 2019, and it actually contracted slightly in August and September.   Why has the manufacturing sector gone into a tailspin?  The ISM data provide an easy answer.  Trade.  The export orders component has plunged to its lowest level since the middle of the 2008-09 recession.  The trade war is taking a serious toll on manufacturing. 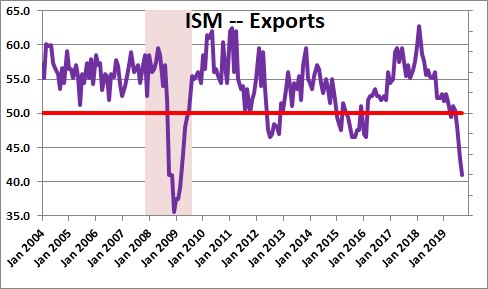 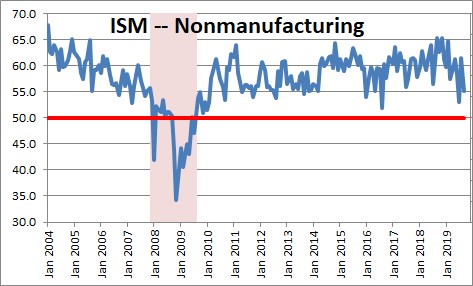 Why is the non- factory sector holding up so well?  Consumer spending.  Such spending has been steady at about 2.5% for years.  The pace of consumer spending in the third quarter should, once again, be about 2.5%.  No hint of a slowdown in this giant chunk of the U.S. economy. 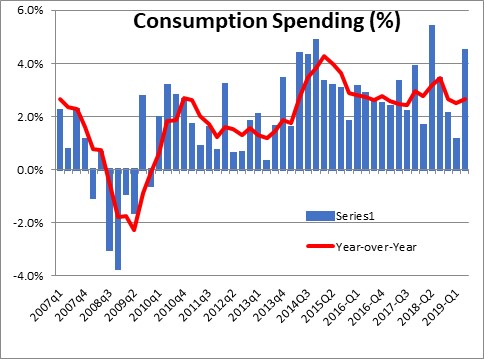 Such strength in consumer spending is not surprising.  The economy is still cranking out 150 thousand jobs per month.  Some bemoan the fact that is substantially smaller than the 220 thousand jobs per month created last year.  About 20 thousand of the drop-off is associated with the manufacturing sector which is legitimately weak.  But for the most part the slower growth in employment stems from the fact that employers simply cannot find enough bodies to hire.  Every month the number of job openings exceeds the number of workers that actually get hired.   Help wanted signs are everywhere.  Every month the economy produces 150 thousand new jobs while the labor force increases by about 100 thousand.  Every month the labor market gets just a little bit tighter which means that the unemployment rate will continue to decline slowly.

The growth in jobs combined with steadily rising worker compensation means that income is growing.  Real disposable income – what is left after we pay taxes and adjust for inflation — is climbing at a solid 3.0% pace.  As long as the economy continues to crank out jobs and wages steadily rise, income with grow.  Income provides the fuel for consumer spending.  With 3.0% growth in income, consumers can easily maintain a 2.5% pace of spending.  At roughly two thirds of the U.S. economy consumer spending is six times the size of the manufacturing sector.  The consumer is doing fine.  As a result, we find it difficult to understand the widespread pessimism that exists amongst economists who generally assume a recession is lurking by the end of next year. 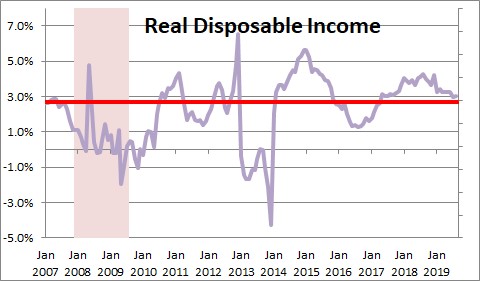 On Wednesday we will get our first look at third quarter GDP growth.  It should be about 2.0%.  Whatever growth rate we see was held down slightly by the G.M. strike in September, the months long cutback in aircraft production by Boeing, and a glancing blow to the East Coast from Hurricane Dorian.  But any negative impact from those factors in the third quarter will be offset in the months ahead.  The G.M. strike seems close to an end, Boeing hopes to get the 737-Max flying again by the end of the year, and the weather has returned to normal.

The economic naysayers will undoubtedly latch onto the third quarter growth rate and try to convince us that the economy has slowed considerably and that the worst is yet to come.  That is not our call.  We continue to anticipate GDP growth of 2.4% in 2020.   As always, we shall see.