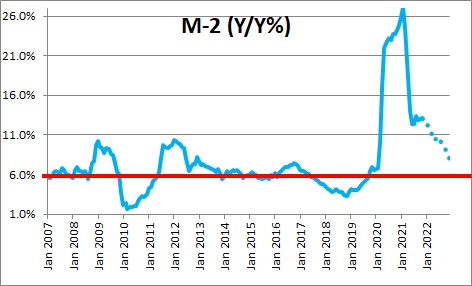 When banks lend to consumers and businesses, they put the proceeds into a checking account.  At that point the money supply begins to grow.

In March and April of last year the Federal Reserve purchased $3.0 trillion of purchases of U.S. Treasury securities and flooded the banking system with reserves in an effort to lift the economy out of the deepest recession in our history  In those two months M-2 grew at annualized monthly growth rates of 42% and 77% respectively.  Its year-over-year growth peaked at 27%.  It has slowed somewhat in recent months but in the past year it has still grown at a dramatic 13.1% annual rate.

It is important to understand that M-2 typically grows at about a 6.0% pace month after month.  The chart below shows how the level of M-2 has risen far above its normal 6.0% trendline.  It is currently $4.0 trillion above its normal growth path.  Thus, there is roughly $4.0 trillion of liquidity slopping around in the banking system which can fuel consumer and business spending for months to come. 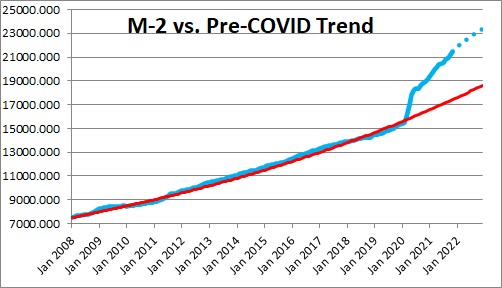 Growth of that magnitude in the money supply will almost inevitably lead to a pickup in the rate of inflation.  And it has.  In the past year the CPI has increased 6.9%.  Its growth rate may slow next year as supply chains are restored, but still the CPI is likely to increase by 5.2% or so in 2022.  A return to a 2.0% inflation rate is not yet in sight. 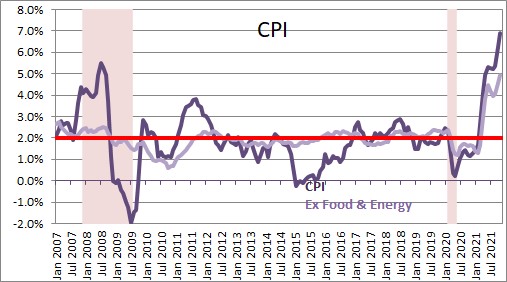