A Case of the Jitters

Stock market participants got nervous this past week.  Some have suggested the selloff was triggered by Fed Chair Powell’s pessimistic view of the economy.  Others pointed to a pickup in the number of new cases of the corona virus and fear of a “second wave”.  In the end, we suspect this was largely a stock market event with few economic causes or consequences.  The market has come a long ways in a relatively short period of time and needed to take a breather. 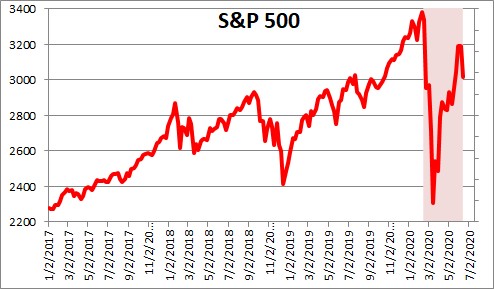 Fed Chair Powell indicated that the Fed anticipated GDP to decline 6.5% this year.    We anticipate a GDP drop this year of just 0.9%.   The difference between the two forecasts probably hinges upon what happens in the second and third quarters.  For the second quarter the consensus seems to be for a drop of about 40%; we expect a decline of 50%.  It is hard to imagine that the Fed has a significantly different forecast for that quarter.  The difference must therefore be largely attributable to what happens in the third quarter.

We believe that the fiscal stimulus is going to result in a sharp rebound in third quarter GDP growth.  We already know that tax refund checks boosted disposable income by 14% in April. 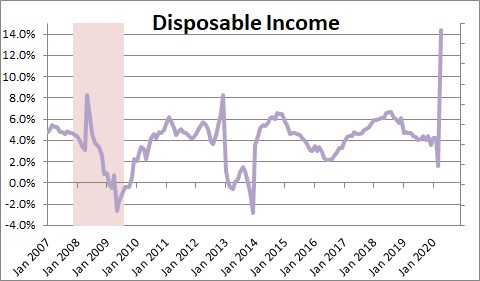 With a dramatic boost in income but no place to spend it given the lock-down, the savings rate surged to 33%.  As the economy re-opens consumers will make deferred mortgage and rent payments, and pay their overdue car loan and credit card bills.  Thus, we expect consumer spending to rise dramatically and, as a result, GDP growth in the third quarter to rebound by 50%.  While we do not know what the Fed is expecting, our guess would be for third quarter growth of perhaps 25%.  Who is right?  Only time will tell.  This is uncharted territory for all of us with no historical precedent to provide guidance.  While we feel like we are on the right track, the reality is that we are all guessing.  All we know is that fiscal stimulus has already boosted income and that will, hopefully, stimulate spending in the months ahead. 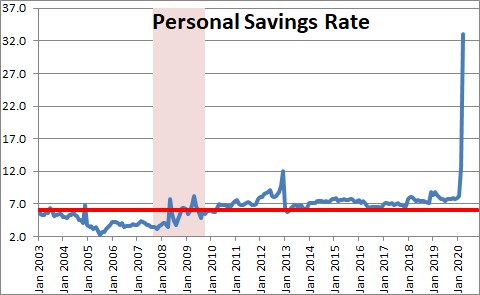 Should we worry about a rebound in the number of new cases of the corona virus?  Probably not a lot.  It is inevitable that more cases will be reported as states re-open and as more people get tested.  But we have learned a few things in the past several months.  First, 80% of the deaths have been amongst Americans that are 65 years of age or older, and most of them had some sort of pre-existing condition.  Hopefully, older Americans are well aware of this reality and will practice all the safe-distancing guidelines recommended by the CDC.  Nursing homes and retirement communities need to be particularly vigilant.  For most working age Americans the death risk is small.  Of the deaths thus far only 3.7% have been for those under age 45, and 8.3% for those under age 55. 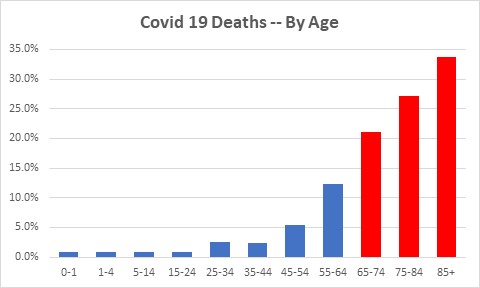 Furthermore, the medical community has gotten much better at preventing corona virus related deaths which have fallen every week since reaching a peak in mid-April.   While they may kick up somewhat in the weeks ahead, they seem unlikely to climb enough to warrant any widespread policy response. 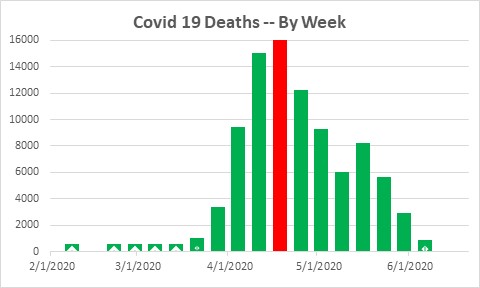 Finally, hospitals have had the benefit of additional time to stockpile an adequate supply of masks and ventilators so, hopefully, any pickup in the pace of spread of the virus will not be as problematical this time as it was in mid-April.

In the end, we think the recent stock selloff was largely a stock market related event with few economic consequences.  The markets has come a long ways in a short period of time and needed a breather.