A Growing Crescendo For Slower Growth! But Is It Right?

The stock market had a bad week in large part because the Fed joined the chorus of those who fear particularly slow growth in coming months, or even a drop back into recession.  Having spent a decade working for the Fed I have the greatest respect for the Fed staff and their forecasting ability.  But all we know at this point is that their rhetoric has changed.  They indicated late week that, “Information received since the Federal Open Market Committee met in June indicates that the pace of recovery in output and employment as slowed in recent months.”  Everybody would agree with that statement.  But how much have they revised their forecasts?  In June they thought GDP would grow between 3.0-3.5% this year, and the unemployment rate would end the year between 9.2% and 9.5%.  We will not know the extent to which they have ratcheted down their forecasts until Wednesday, September 1.  It might be a little, or it might be more significant.

We currently expect GDP growth of 3.0-3.25% in the second half of this year, which is not that different from what the Fed anticipated in June.  While the July data are probably consistent with a somewhat slower pace, it is a long time between July and December and we are not yet inclined to revise our forecast for a variety of reasons.

Last week, following the release of the July employment report, we pointed out that the 71 thousand increase in payroll employment was not all that bad given that in the first quarter of last year the economy was losing 700 thousand jobs a month.  We have come a long ways in a relatively short period of time.  We also pointed out that in lieu of hiring more bodies, businesses have chosen to work their existing employees longer hours.  Either way they are able to boost production. 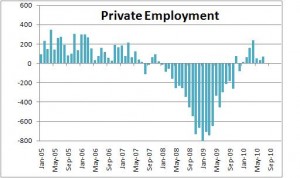 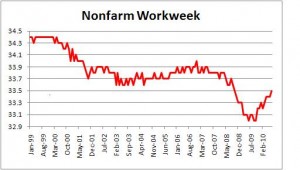 Between the low point in October of last year and July of this year private employment rose 622 thousand or 69 thousand per month.  During that same period of time the workweek rose from 33.7 hours to 34.2 hours.  If you work through the math, every 0.1 hour increase in the workweek is the equivalent of hiring 319 thousand workers.  So if, rather than increase the workweek corporations were to have hired additional bodies, employment in the nine month period between October and July, would have risen 2,220 thousand rather than the reported gain of 622 thousand.  That is an additional 1.6 million jobs!  That would mean that the monthly average gain in employment in the nine month period between October and July would be 246 thousand rather than 69 thousand.  That is not too shabby!  And if that were to have happened, none of us would be whining about a jobless recovery.  Firms may not be hiring many additional workers, but they are working existing employees longer hours which boosts the income of those who do have jobs.

Between what has happened to employment and hours worked as described above, and a gradual increase in hourly earnings, consumer income continues to climb.  Real disposable income rose 1.6% in the first quarter and 4.3% in the second.  And given the employment, hours worked, and earnings data for July it is clear that disposable income will probably rise an additional 3.0% or so in the third quarter. 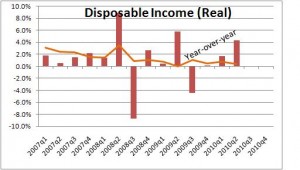 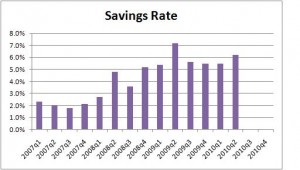 We learned last week that consumer sentiment bounced back somewhat in August following a sizable, worrisome decline in July.  It remains below levels attained earlier this year, but not significantly so.  Most likely the July drop was attributable to the stock market selloff registered from late March through June.  If consumers keep the faith, the pace of spending will not slow much if at all. 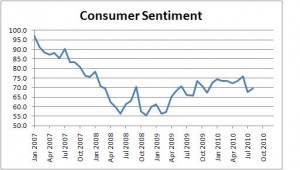 The stock market decline that may have caused the July drop in confidence has been halted, and the market has recouped at least some of its earlier losses.  Its recent behavior seems more consistent with modest growth in the economy, than with no growth or a dip back into recession. 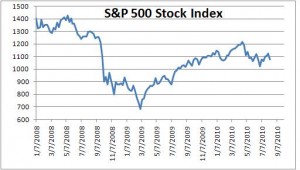 What seems to be missing from most discussions of the economy is the corporate sector, investment spending, and the extent to which corporations are sitting on a sizeable pile of cash just waiting to be invested.   Corporate America has been investing heavily in software and productivity enhancing equipment since the recession ended in June of last year.  Over the past year such spending has risen 15%, but in the two most recent quarters growth has been at 19% and 20% annual rates so, if anything, businesses are accelerating their spending on anything which might enhance productivity.  As a result, equipment spending has been the fastest growing sector of our economy.  That hardly seems consistent with the notion that economic activity is on the verge of a significant slowdown. 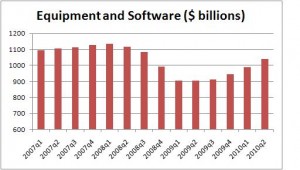 Finally, corporate profits have risen sharply over the past year and a half which has both boosted the stock market and allowed corporations to build up vast sums of cash.  Corporate cash levels have jumped by nearly $400 billion or 25% during that period of time.  Thus, it seems likely that investment spending – particularly on software and equipment – will accelerate in the final two quarters of this year.  Even spending on factories appears to have hit bottom in the second quarter after a steady two-year decline.  That would be another positive factor. 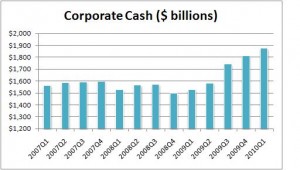 The point of all this is that market participants and economists currently seem far too pessimistic.  Yes, there is a long list of headwinds.  But, equally important are some of the factors discussed above, and it would not be too surprising to see growth accelerate somewhat in the final two quarters of this year.