The outcome of the Fed’s meeting this past week heightened a fear factor that had been percolating for months.  It was not what the Fed did by raising the funds rate by 0.75%.  That was largely expected.  The scary part was what Fed Chair Powell said.  He highlighted the fact that the Fed was committed to bringing the inflation rate back to the 2.0% mark even at the risk of recession.  That was both eye-opening and terrifying to investors.  The stock market is now down 22% from its peak at the end of last year.  Bond yields have surged to 3.75% which are the highest in a decade.  In every business cycle there is what we call a “holy cow” moment when consumers and businesses suddenly recognize the danger and collectively change their behavior.  Has that moment arrived?  We do not think so.  With the labor market still very strong and real interest rates negative we are not yet ready to project a recession.  Having said that we are far more concerned than we were just a week ago and, accordingly, we have lowered our 2023 GDP forecast from 1.5% to 1.0%.  Psychology trumps everything.  Potential home buyers could disappear.  Consumers may fear they might not have a job in six months and further curtail spending.  Businesses may pull job offerings off the table and actually begin to lay off workers.  While the recession still may not have arrived, it is likely a lot closer in time than we thought a week ago.

The Fed will never forecast a recession, but Fed Chair Powell came about as close to predicting one as you will ever hear from a Fed official.  He indicated that slowing inflation is never accomplished without pain which means that the unemployment rate needs to rise above the 4.0% mark that the Fed regards as full employment.  The Fed indicated that it expects the unemployment rate to reach 4.4% next  year.  The funds rate is unlikely to rise that sharply without a recession.  At 4.4% there will be some people who want a job but do not have one.  That should slow the pace of wage growth which will, theoretically, help to curtail inflation. 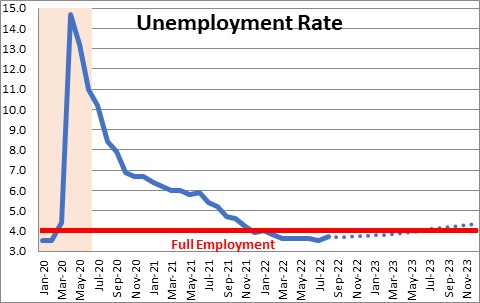 The labor market today is very tight.  Jobs are scarce.  There are twice as many job openings as there are unemployed workers.  The first thing that has to happen is for these unfilled job openings to disappear.  Thus far that has not happened. 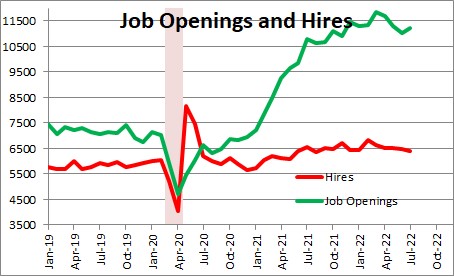 We have never experienced a time when there are so many job openings.  Without doubt these job openings are going to disappear in the months ahead.  But the question is, at what point will businesses actually begin to lay off workers?  During the 2020 lockdown firms laid off 22 million workers.  Once the economy rebounded they wanted to hire them back but they could not find them.  Many retired.  Others just disappeared.  Given that experience, firms are reluctant to lay off workers now for fear that they may not be able to get them back.  A worker with 20-years’ experience cannot be replaced easily.  But at some point firms will have to reduce headcount. They will not have a choice.  They cannot continue to pay every worker currently on the payroll if demand shrinks.  Profitability will decline.  Investors will scream.  Layoffs are coming.  But when? 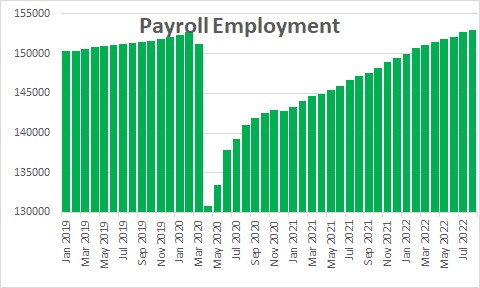 In addition to the labor market we need to keep an eye on housing.  As mortgage rates have risen and home prices have continued to climb rapidly, housing affordability has declined sharply.  Between the 2020 recession and today, the down payment required to purchase a median-priced home has jumped from $55,000 to $81,000.  The monthly payment has increased from $1,000 to $1,900.  These changes have eliminated many first-time home buyers from the market, and made it more financially challenging for everybody else. 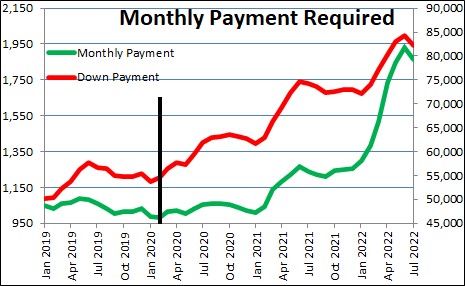 Not surprisingly home sales have plunged.  But what’s next? 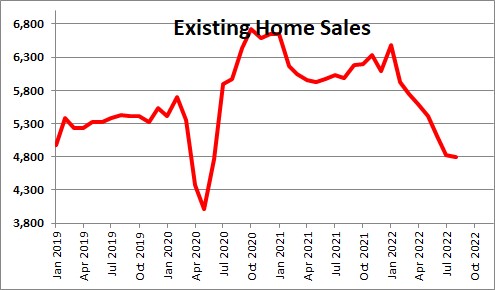 A further small increase in mortgage rates of 0.25% to 6.5% by yearend will be a negative factor for the housing market.  But housing affordability is determined by three factors – mortgage rates, home prices, and growth in consumer income.   What about the other two?

After climbing at a breathtaking 10-20% pace the past two years, home prices have risen far more slowly in June and July, and will almost certainly register declines in the months ahead.  The days of multiple offers on listings has disappeared.  Sellers are finding that the even a more realistic asking price is having to be reduced slightly to complete the sale.  The housing market has changed and home prices are certain to decline in the months ahead. 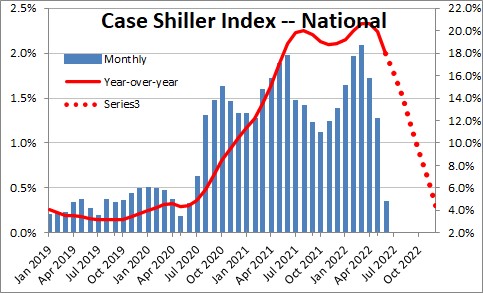 The other part of the housing affordability equation is consumer income which is largely determined by the combination of job gains and wage growth.  The current pace of job gains of 375 thousand per month will slow, but hiring is unlikely to decline for some time to come.  With real wages falling, workers and unions are demanding sizable, multiple year increases in wages.  The combination of increases in employment and rising wages will keep  personal income rising at a respectable 4.5% rate in the upcoming year. 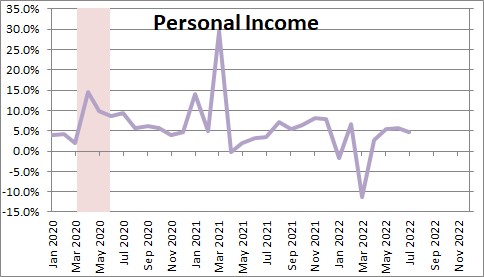 Looking at all three housing affordability factors combined, it is likely that affordability will increase slightly in the months ahead.  If that is true, then the worst should be over for the housing market and home sales should stabilize at roughly their current pace. 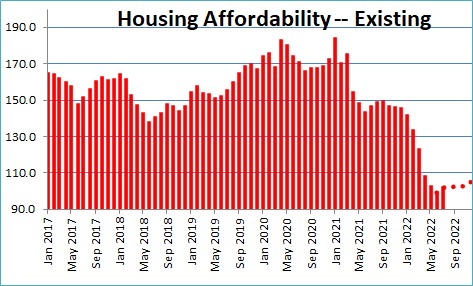 Finally, the markets have been spooked by the Fed’s increase in the federal funds rate thus far and by where the Fed says the funds rate might go in the year ahead.  We have not seen a 5.0% funds rate since 2007. 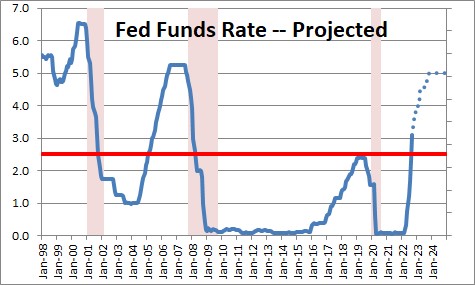 However, a 3.25% funds rate today is not all that punishing given that the core inflation rate is 6.5%.  If the Fed lifts the funds rate to 4.5% by yearend and inflation slows slightly to 6.0%, the real rate will still be -1.5%.  A negative real rate will not slow the economy very much, nor will it be sufficient to significantly slow inflation. 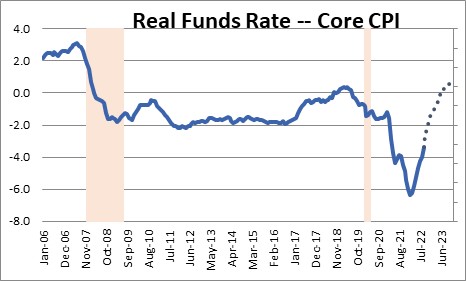 Given what has happened in recent weeks we are not yet ready to call for a recession between now and the end of 2023, but we did shave our 2023 GDP forecast from 1.5% to 1.0%.  The Fed is getting more serious about its commitment to lowering inflation by raising rates more quickly than it indicated previously.  But the really important factor between now and yearend is consumer and business psychology.  If consumers significantly curtail their spending and business begin to lay off workers, a recession could begin much sooner than 2024.  Not our call, but not an implausible scenario either.