A Long Ways to Go

Second quarter GDP growth will be released on Thursday morning, July 28 – the day after the FOMC meeting.  For what it is worth, we expect 0.5% GDP growth in that quarter.  But combining that growth rate with a 1.6% decline in the first quarter paints a picture of an economy that is in trouble.  But is the economy as weak as the GDP growth rates suggest?  No.  Will anemic first half growth throw a wrench into the Fed’s series of planned increases in the funds rate?  No.  How high might the funds rate need to climb to slow the pace of economic expansion enough so that inflation retreats to the desired 2.0% pace?  We are thinking 5.0% (or higher)  which is significantly above the 3.8% funds rate the Fed currently anticipates at the end of next year.

Everybody seems convinced that we are either already in or soon will be in a recession.  If they are right, the economy should slow enough to bring down inflation and rates will not need to go much higher.  We think they are being far too pessimistic about the economy.  An unwritten rule in the world of economic forecasting is never underestimate the strength and resilience of the U.S. economy.

With respect to the notion that we are already in a recession, the economy continues to crank out jobs.  Lots of them.  In a recession payroll employment declines.  Currently the economy is producing 375 thousand jobs per month with few signs of slowing.  Initial claims (layoffs) have risen somewhat but still remain very low.  Job openings have declined for two consecutive months, but the declines are moderate and they are falling from a record high level.  The labor market remains very tight and is unlikely to reverse course any time soon. 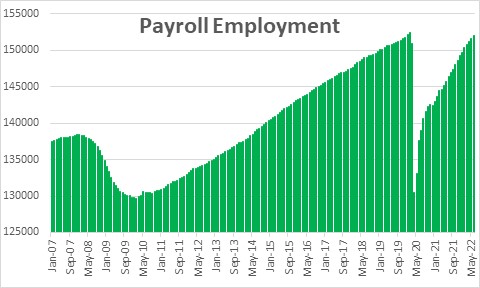 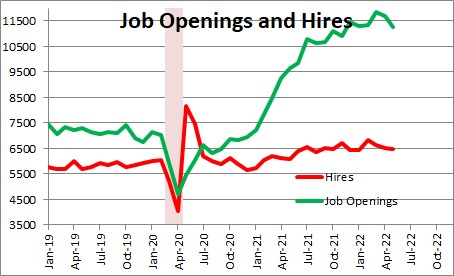 Industrial production declines in a recession.  Instead, it has risen steadily for the past year although it has leveled off in recent months.  As the supply chain difficulties recede there will be a tailwind for the economy for the rest  of this year and on into 2023. 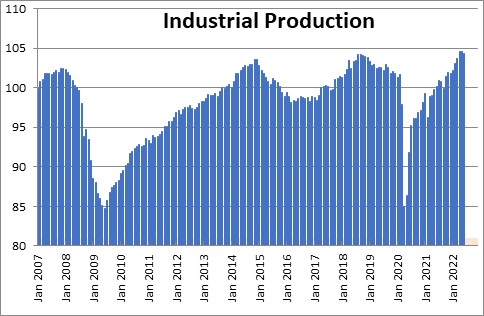 The production manages indexes produced by the Institute for Supply Management for both the manufacturing and service sectors of the economy remain above the breakeven point of 50 through the month of June.  If the economy were in recession they would have dropped well below the 50 mark. 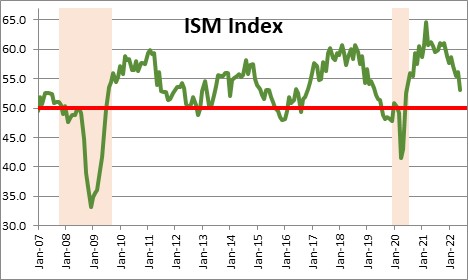 We suspect that the Fed sees things the same way.  In mid-June they expected GDP growth for the year of 1.7%.  They already knew that first quarter growth had fallen by 1.6%.  That means that they expected GDP growth in the final three quarters of the year to average 2.8%.  While their forecast may have softened in the past month, nothing that has been released seems likely to have caused a wholesale downward revision.

On  the inflation front the CPI data for June revealed a 41-year high 9.1% increase in the past year.  The core CPI (excluding the volatile food and energy components) has risen 5.9% in the past year which sounds better, but it has accelerated in the past three months.   Inflation is an inescapable problem that is showing no sign of going away any time soon.

Thus, the combined expectation of solid economic growth in the second half of the year and long-lasting upward pressure on the inflation rate will force the Fed to maintain or accelerate its pace of tightening.  Thus, a 0.75% increase in the funds rate next week is probably the best bet.  But whatever the Fed does it is merely another step on the path to higher rates.  How high might the funds rate need to go to break the back of inflation? 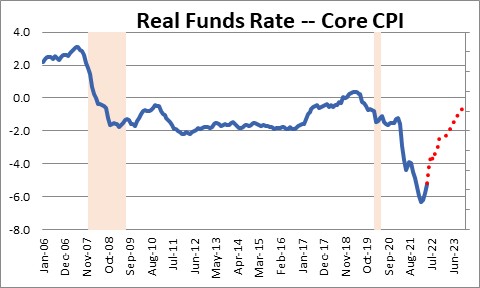 Even the Fed believes that it needs to get real rates positive.  Over the long run if the Fed hits its 2.0% inflation target it believes the funds rate should be 2.5%.  In other words, it believes a positive real funds rate of 0.5% will be required to stabilize the economy and keep inflation in check.