The Fed has extended its economic outlook through 2024.  It expects GDP growth to slow gradually in each of the next few years.  It is sticking with its story that the currently elevated inflation rate is transitory and will return to its 2.0% target range next year and remain there for the foreseeable future.  It plans to raise the funds rate from 0.0% today to 1.8% by the end of 2024.  Keep in mind that the Fed thinks a “neutral” funds rate is 2.5%.  So, 3-1/2 years from now Fed policy is still slightly accommodative.  From a policy-maker’s standpoint this is an ideal scenario.  But is it realistic?

But let’s face it, economic forecasts are always wrong.  There is no reason to think that anyone’s forecast two or three years into the future will be more accurate than anybody else’s forecast.  That is why it is important to understand the reasons why the economist came up with that particular view.  Does it make sense?  Unfortunately, the Fed’ s recent forecasting record has been less than stellar.  For the past 18 months it has consistently underestimated both GDP growth and inflation and overestimated the unemployment rate, which suggests that, perhaps, it does not fully understand what is happening.  That, in turn, damages its credibility.  While it might be right, its recent track record suggests otherwise.

The Fed expects GDP growth for this year to be 5.9%.  Given that we already know what happened in the first two quarters of the year we can work backwards and figure out that it expects growth in the final two quarters to average 5.4%.  We do not know the split.  Perhaps 6.4% in the third quarter followed by 4.4% in the fourth quarter?  That seems reasonably in line with the street consensus.  We look for growth of 8.0% and 10.1% in those two quarters which puts us at the high end of the range of expectations.  Our forecast is largely based on three things.  First, we are betting that many currently employed workers will return to the job given that federal unemployment benefits have now expired.  Specifically, we expect job gains to average 700 thousand per month in the final four months of the year.  We also expect any growth slowdown caused by the upswing in COVID cases to be minimal.  Finally, we expect business leaders to find ways to work around the current supply constraints and thereby boost production.  As always we will see.

Longer term the Fed believes the economy’s potential growth rate is 1.8% probably consisting of 0.4% growth in the labor force combined with 1.4% productivity growth.  We believe that firms will need to rely heavily on technology to keep them competitive.  Hence, we expect productivity to climb by 2.0% in the years ahead.  That means that the economy’s potential growth rate might be 2.4% compared to the Fed’s estimate of 1.8%.  As a result, we anticipate somewhat faster GDP growth than the Fed in the 2022-2024 period.

The biggest difference between the Fed’s projections and everyone else’s (ours included) is with respect to inflation.  The notion that the current run-up in inflation is entirely transitory and will return to the Fed’s targeted rate of 2.0% by 2022 seems implausible.

The purchasing managers’ survey for September indicates that prices paid by both manufacturing and service sector firms, while rising at a slightly slower rate than in other recent months, are still rising. 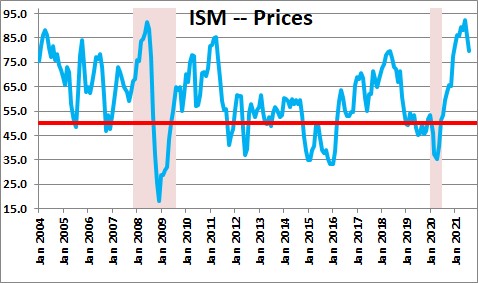 Further, those same two surveys indicate that supplier deliveries have a similar pattern – slightly faster than in other recent months, but still the slowest in decades and comments from survey participants do not expect this situation to change any time soon.  The Fed expects the temporary boost to inflation to soon disappear, but there is no evidence that process is underway. 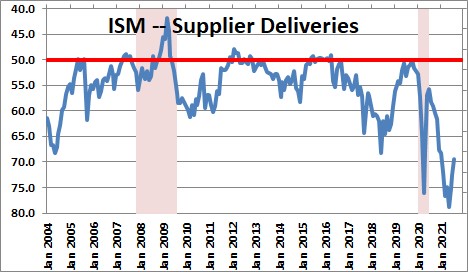 In the labor market demand far exceeds supply as evidenced by the data on job openings relative to hires.  Job openings are at a record high level.  The demand for workers across all industries seems insatiable.  As a result, firms are having to ante up to get the workers they need, particular for relatively low wage jobs.  Twelve dollar per hour jobs have become $15.00.  And purchasing managers participants indicate they are able to pass those higher labor costs on to their customers.  Even if firms hire 700 thousand workers every month between now and yearend the imbalance will linger.  That translates into protracted wage pressure and, most likely, higher prices for consumers. 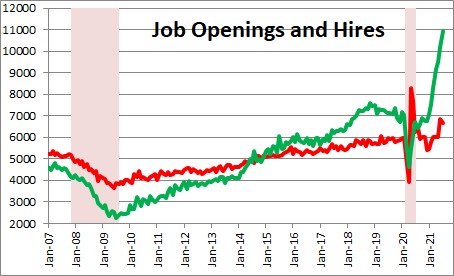 Finally, there is the rent component of the CPI.  The demand for housing continues to far exceed supply.  That includes single-family homes as well as apartment buildings.  That translates in further upward pressure on both home prices and rents.  Given that the housing component makes up one-third of the entire CPI index, it is difficult to see how inflation abates any time soon.  While the Fed expects inflation to slow to 2.3% next year, we peg it at 3.7%.  That is far more rapid than what the Fed had in mind. 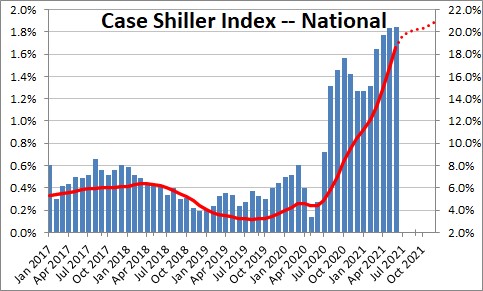 Even if inflation continues to run hot, we are not sure this changes the outlook for the funds rate, The Fed expects the funds rate to rise from 0.0% this year to 0.25% at the end of next year, 1.0% in 2023, and 1.8% in 2024.  If inflation surprises to the upside it is unlikely the funds rate will be higher than 1.8% by the end of 2024.  The funds rate should be higher by that time, but we believe this group at the Fed, Chair Powell in particular, is succumbing to political pressure.  Fed policy, in our view, will remain accommodative through the presidential election in 2024.  If inflation rises as much as we expect, we hope the Fed will by the end of 2024 have the courage to at least lift the funds rate to the 2.5% mark which is what it considers to be neutral.