The employment report for January was generally interpreted as a disappointment because payroll jobs rose by 49 thousand and the December decline, which was originally published as a drop of 140 thousand, was revised to a larger decline of 227 thousand.  While factually correct, that interpretation is grossly misleading.  Never mentioned in the press is that the workweek jumped 0.3 hour to a record length of 35.0 hours in January.  At the same time the unemployment rate fell 0.4% in January to 6.3% and now appears likely to fall to 4.0% (the full employment threshold) by the end of this year – two years sooner than the Fed and most market economists expect.  The January employment report was sufficiently strong to cause us to revise our first quarter GDP forecast upwards from 2.6% to 3.5% and even that may be too low.

In addition to hiring people, businesses can lengthen the hours worked of existing employees.  The nonfarm workweek rose 0.3 hour in January from 34.7 hours to 35.0 hours which is the longest workweek on record.  Rather than hire additional workers, firms chose to work their existing workers longer hours to satisfy demand.  The January gain in hours represents an increase of 0.86%. If employers had chosen to hire additional workers rather than lengthen the workweek, the increase in payroll employment in January would have been 1.2 million.  Can you imagine the headlines if the published data had shown an increase of 1.2 million jobs in January? 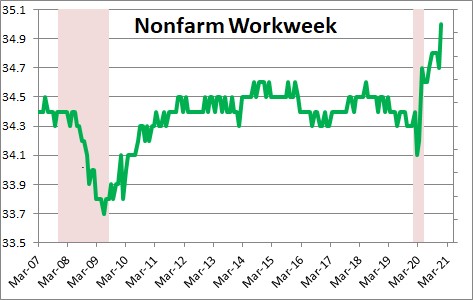 The unemployment rate surprisingly dropped 0.4% in January from 6.7% to 6.3%.  And, as usual, the media chose to explain it away.  But the reality is that monthly forecasts of the unemployment rate have come in lower than expected every month since May.  Perhaps the correct conclusion is that the labor market is not nearly as weak as most economists – including the Fed – think it is. 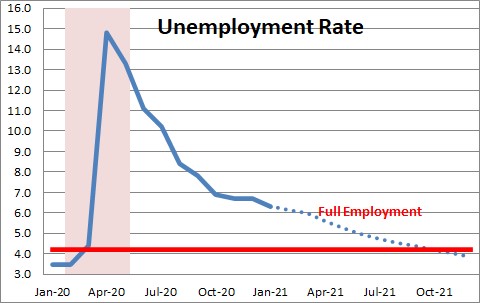 While the drop in the employment rate has been far faster than expected, the reality is that it remains higher than the 4.0% rate that the Fed considers to be the full employment threshold.  It is also below the 3.5% rate that existed in February of last year just prior to the onset of recession.  The Fed believes the unemployment rate will not decline to the 4.0% mark until the end of 2023.  By way of contrast, we suggest that it will drop to the 4.0% mark by the end of 2021 – two years ahead of the Fed’s schedule.

Is such a forecast unwarranted?  Obviously, we do not think so.  In the past three months – when the spread of the corona virus significantly dampened employment in the leisure and hospitality industry – the unemployment rate dropped from 6.9% to 6.3% or 0.2% per month.  In the months ahead we know that the both the economy and the labor market are going to be strengthened considerably by several factors — the tax refund checks distributed in January from the $900 billion fiscal stimulus package passed in December, additional stimulus of as much as $1.9 trillion that is currently working its way through Congress, and by the rapid distribution of the two vaccines already available which will presumably boost consumer spending and hiring.  To believe that the unemployment rate might continue to drop by 0.2% per month in the 11 months remaining in 2021 strikes us as conservative.  If that is accurate the unemployment rate should decline by a total of 2.2% from 6.3% currently to 4.1%.  So is a 4.0% unemployment rate by December unreasonable?  We do not think so. 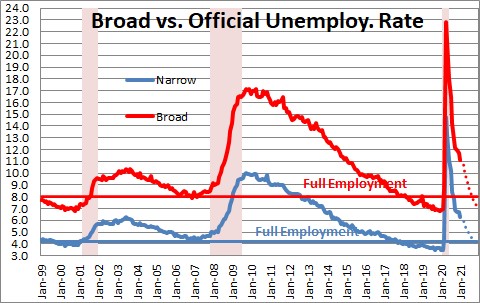 The changes in employment and hours worked are reflected in the aggregate hours index which rose 0.9% in January to 106.4.  Between the increase in employment and the dramatic increase in the workweek those people are producing something — which is what GDP is all about.  For that reason we have raised our estimate of first quarter GDP growth from 2.6% to 3.5%.  But this forecast is far lower than the Atlanta Fed’s GDPNow measure which tracks incoming data and is currently at 4.6%, and the Federal Reserve Bank of New York’s Nowcast which stands at 6.8%. 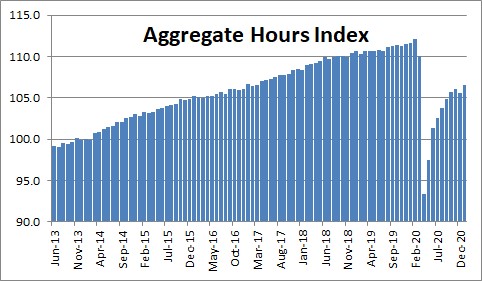 With (presumably) a relatively robust GDP growth rate in store in the first quarter, and even more sizeable gains in the quarters beyond as additional stimulus kicks in and the vaccines make us feel more comfortable, we should find that GDP growth achieves its pre-recession level by the middle of this year, and climbs back to its potential growth path by the middle of next year. 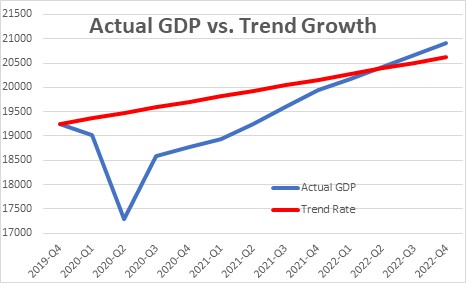 Despite all of this our policy leaders in Washington – from President Biden to Jerome Powell to Janet Yellen — continue to hawk the notion that the economy and the labor market are weak and in need of large doses of additional stimulus to ensure that they continue to grow.  Even today Biden said that the economy is “in trouble”.  Nonsense.  Our fear is that all three of these people as well Congressional leaders of the House and Senate are trying to sell a political agenda and distorting the true economic picture to accomplish that objective.  No wonder Americans today distrust politicians.