Judging from the mainstream media, health care experts, politicians on both sides of the aisle, economists, and market participants, the corona virus has become a pandemic that is going to crush the global economy for an extended period of time.  They are all throwing fuel on the fire.  They have become the problem, not the virus itself.

As of March 6, nearly 100,000 people around the globe have contracted the disease since it was first reported in China in December of last year.  And it is deadly – 3,390 people have died thus far.

In the United States through March 6, 233 people have contracted the disease and 14 have died.

What if I told you that an alien spaceship was going to land in the United States and spread a virus that would infect 250,000 Americans per day.  Furthermore, the virus was so deadly that It was going to kill 240 Americans per day.   How would you react?  My guess is that we would be scared out of our minds.  But guess what.  The spaceship has landed and that virus already exists.  It is known as the common flu.  And we do not hear a peep from anybody about it.

The Center for Disease Control has told us that since the beginning of the flu season on October 1, somewhere between 34,000,000 and 49,000,000 Americans have contracted the flu.  But who cares?  We all get the flu.  We are miserable for a week or so.  Then we recover.  What’s the big deal?

You might say that the corona virus is more deadly that the flu.  That is not true.  The common flu is also a killer.  The CDC points out that since the beginning of the flu season 20,000 to 52,000 Americans have already died from the flu.

We don’t worry about the common flu because it happens every year.  We are used to it.  Furthermore, this year is shaping up as an average, or only slightly above average, flu season.

We are scared because we presumably do not know what is going to happen.  And while it is not so bad yet, the experts tell us it is going to get far worse down the road.  Perhaps.  But thus far in the flu season the common flu has caused 10 times more deaths than the corona virus – 36,000 versus 3,400.  The corona virus this year is not going to kill anything close to the number of people killed by the common flu.  But that is all we hear about.

Furthermore, we do know something about what is going to happen in the weeks and months ahead.  In China, where the virus got started, in the beginning several thousand people per day were contracting the disease.  Today only about 300 new cases are reported daily and about 1,000 people recover.  Thus, the number of active cases of the corona virus has dropped more than 30% from a peak of 35,000 to 23,000.   The number of active cases is important because the disease can only be spread by active cases.  You cannot spread it if you are dead or have recovered.  The problem is declining.  There is no reason to expect the experience in the rest of the world to be significantly different.  If the virus began to spread outside China in early February, it is likely that by early April we should begin to see clear evidence that the disease is finally getting under control.

But yet the world is in panic mode.  Health care officials call it a pandemic.  Nobody bothers to mention that the total number of flu cases throughout the world – including the corona virus – is no worse than it was last year.  The media has picked up only on the corona virus.  It gets page 1 headlines in every newspaper around the world.  One half of the 30-minute nightly news programs are devoted to talk about the virus and which states found a single new case of the virus that day.  Airlines are cancelling flights to countries that have reported a large number of corona virus cases.  Corporations are canceling conferences.  Spring training baseball games are being played to empty stadiums.  School districts are closing for a period of time.  People are being quarantined at home, in hospitals, nursing homes, and on cruise ships.  Every Democrat is telling us that the administration is not doing enough to combat the virus.  Even some Republicans are telling President Trump he needs to do more.  The Fed panicked this week and cut rates by a whopping 0.5% at an emergency meeting two weeks ahead of its usual FOMC gathering.  Market participants see and hear all this, and are in full-fledged panic mode.

All of this for a combination of flu viruses that seem little different from what we see every year.

The virus is not the problem.  The problem is everybody’s reaction to it.  And, no question, if Americans (and others around the globe for that matter) lose the faith, the economy is in trouble.

But let’s breathe for a moment.  The economy generated 273 thousand new jobs in both January and February.  Despite an expectation from some economists that first quarter GDP growth would be weak at about 1.5%, now it appears that growth is more likely to be 2.5%.  But economists are quick to point out first quarter growth does not incorporate any impact from the virus.  Generally true, but consumer confidence for February climbed to 101.0 and narrowly missed the highest level thus far in the expansion even though consumers were bombarded by virus news throughout the month. Growth may slow somewhat in the second quarter, but from what to what?  We have trimmed our second quarter GDP forecast from 2.3% to 1.8%, but we also boosted third quarter growth from 2.3% to 2.6% with the idea that the virus will have largely run its course by then.  For the year our GDP forecast has changed very little – from 2.4% to 2.3%. 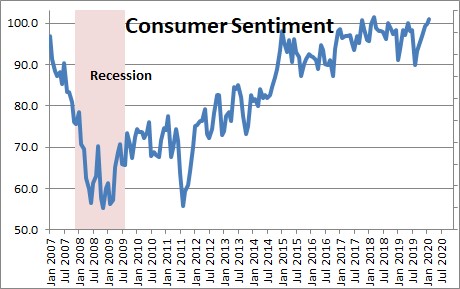 The stock market has fluctuated wildly from day to day but the reality is that the S&P 500 index has fallen only 13% from its mid-February peak.  With 1,000-point daily swings becoming almost routine, it feels like a much more dramatic drop. 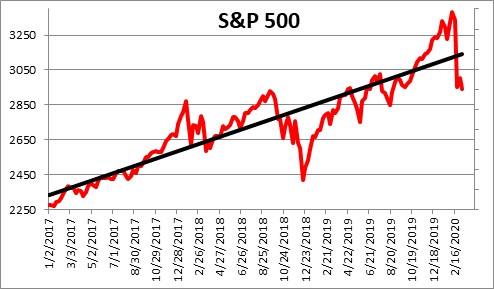 A major contributor to the problem is the Fed.  It cut rates three times last summer from 2.25-2.5% to 1.5-1.75% because of fears that weak growth outside the U.S. might negatively impact the U.S. economy.  That didn’t happen.  Now it comes in two weeks prior to its next scheduled FOMC meeting and cuts rates not by the expected 0.25%, but by a full 0.5% to 1.0-1.25%.  The Fed hoped that action would boost investor confidence.  It did.  But only for about an hour.  By the end of the day the markets concluded that lower rates were not going to solve the flu problem and would not restore supply chain interruptions, and the stock market tanked.  Powell further suggested that the impact of the virus could persist “for some time”.  Despite the best of intentions, the Fed’s actions enhanced the degree of panic that was already evident in every financial market from stocks to bonds to commodities.  Now the market expects further cuts in the funds rate of 0.75% by June to the 0.25-0.5% mark.   Let’s hope the Fed has learned its lesson that lower interest rates are not the solution to the problem.  Keep in mind that every single rate cut diminishes the amount of ammunition the Fed has to fight a real economic slowdown whenever that occurs.

The world has run amok.  People everywhere, in our opinion, are not thinking rationally.  Our hope is that in a couple of months there will be clear evidence that the virus is coming under control, market participants will breathe a sign of relief, reassess their outlook for the economy, and conclude that the future is relatively bright.  We know we are an outlier on this but, as we see it, there is no cause for the widespread panic that is prevalent today.