We continue to be struck by economists’ perpetual fear that a recession or substantially slower growth is just around the corner.  If a weak economic indicator is released they tell us that our fear of contracting COVID is preventing us from going to a restaurant or getting on an airplane.  If a strong indicator is released the story is that it will expedite the time when the Fed begins to reduce its monthly purchases of securities and/or begins to raise the funds rate.  In their mind we seem to be doomed.  Slower growth lies ahead no matter what.  But they seem to forget that our economy is dynamic and quickly adapts to change.   It will continue to do so.  Over the past 18 months 22 million Americans lost their jobs.  Business leaders have had to quickly adapt from a situation where workers came to the office every day to a situation where they were suddenly forced to work from home.  Those same businesses have had to cope with significant delays in getting the materials they need for production because of supply chain interruptions.   Commodity prices have risen 50%.  Many unemployed workers are reluctant to return to their jobs for fear of getting COVID (or perhaps because they enjoyed generous unemployment benefits).   Despite these wrenching adjustments the economy has come roaring back.  In contrast to an expectation that the economy would shrink for months in the face of the pandemic, the recession lasted just two months.  The breadth and speed of the rebound has exceeded even the most optimistic forecasts.  Business leaders were quick to embrace new technology.  As a result, In the 18 months since the recession began productivity growth has accelerated.  Corporate earnings have skyrocketed.  The stock market is at a record high level.  The constant drumbeat of pessimistic forecasts is getting a bit stale.

Today the fear is that because federal unemployment benefits expired after Labor Day that consumer income will decline and they will have less spending power.  Sorry.  We do not buy that.  The assumption might be correct if these unemployed workers reman unemployed.  But the reality is that most of them are going to get jobs.  Why?  First because their income has dropped and they need to.  But also because the new job they are going to get will be considerably more attractive than their old job.

When unemployed workers were receiving both state and federal unemployment benefits their earnings were about $16.50 per hour which works out to $34,000 per year.  Many were making less than that when they were working.  So they chose to remain unemployed until those benefits expired.  But losing $300 a week in federal benefits, their income has dropped to $18,400.  They need to go back to work whether they want to or not.

We hear a lot about restaurant workers, amongst others, reconsidering their options.  A job as a line chef or a dishwasher is tough and comes with low pay and long hours.  Restaurant owners have had considerable difficulty finding enough bodies to fully re-open.  As a result, they have had to pay-up to get the workers they need.  Average hourly earnings for restaurant workers have been skyrocketing.  Prior to the pandemic average hourly earnings in the industry were $16.77 per hour.  Today they are $18.72 per hour.  That works out to an annualized growth rate of 8.2% in 18 months.  But since the end of last year the growth rate in their hourly earnings has accelerated to a 20.0% pace!  Pay in the restaurant industry is changing dramatically.  A job in the restaurant industry today pays a lot more than it did 18 months ago.  Many of these workers wanted to rethink their options while they were unemployed.  That was an easy decision to make when someone was paying you not to work.  But now that their income has dropped sharply, they may have to make a different decision.  And the reality is that their new job may pay far more than the one they left behind 18 months ago.  Our bet is that employment rises 700 thousand per month between now and yearend and the unemployment rate falls to 4.5%.   The income these people lose from reduced unemployment benefits will be replaced by a job that pays them considerably more than they were able to earn while unemployed. 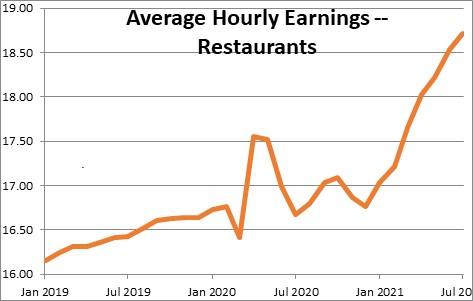 In the past 18 months the economy has gone through, arguably, the most wrenching changes in its history.  But the rebound has been the quickest and most robust ever.  A lot of that is attributable to an unprecedented amount of stimulus.  But also business people have embraced new technology to help them adapt. 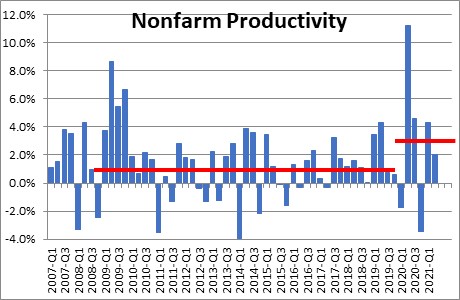 In the 10 years prior to the recession corporate earnings grew 7.0% per year.  In the six quarters since earnings growth has averaged 10.6% and they have climbed to a record high level. 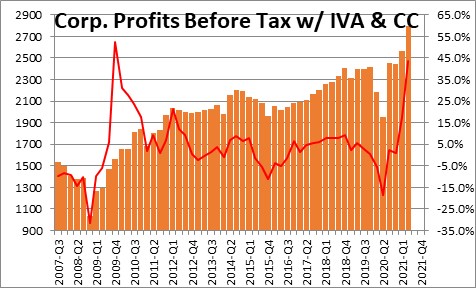 Those impressive earnings results is why the S&P 500 index continues to defy expectations and now also stands at a record high level. 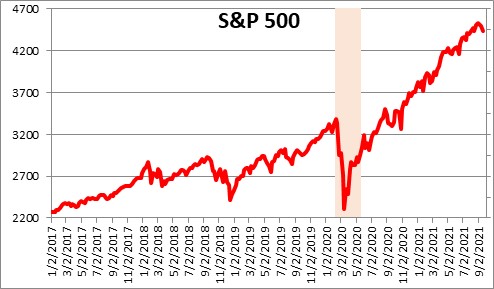 In our opinion, economists who do not acknowledge the dramatic changes in the U.S. economy in the past 18 months and the ability of consumers and business people to adapt, will continue to underestimate economic growth and the stock market performance in the months ahead.