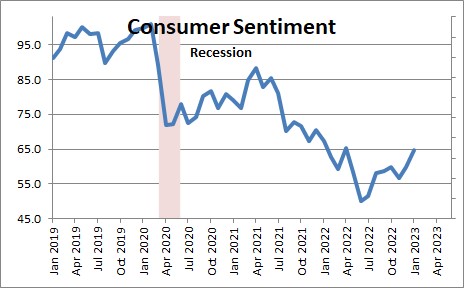 The preliminary  estimate of consumer sentiment for January rose 5.2 points to 64.9 after rising 2.9 points in December  The June level of 50.0 was the lowest on record and roughly comparable to the low levels reached in the 1980 recession.

Surveys of Consumers Director Joanne Hsu said, “Consumer sentiment remained low from a historical perspective but continued lifting for the second consecutive month, rising 8% above December and reaching about 4% below a year ago. Current assessments of personal finances surged 16% to its highest reading in eight months on the basis of higher incomes and easing inflation. Although the short-run economic outlook fell modestly from December, the long-run outlook rose 7% to its highest level in nine months and is now 17% below its historical average.”

We hear the angst amongst consumers when they respond to this survey because of concern about the inflation outlook.  That fear seems warranted.  The reality is that while wages have risen 4.6% in the past year inflation has risen 6.7%.  As a result, real wages have fallen by 2.1%  So even though the consumers balance sheet is in terrific shape with debt in relation to income the lowest in 40 years, their purchasing power is declining.  That is not a sustainable situation and it makes people nervous. 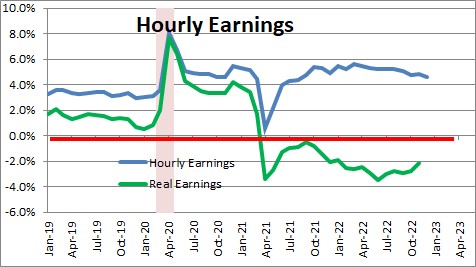 Given that sentiment is as a very low level, consumers should be sharply cutting back on their spending.  Thus far there is little evidence of that.  Consumer spending is growing slowly.  In real terms retail spending has leveled off. 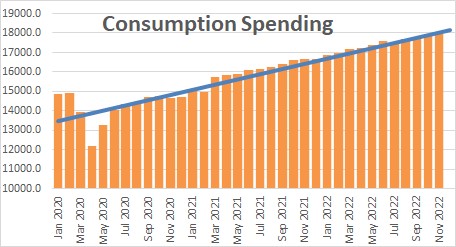 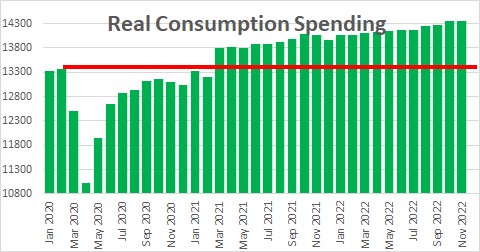 Consumers are currently spending vigorously on services, but goods spending has actually declined.  Specifically, spending on goods has declined  0.7% in the past year.  But in the much bigger service sector spending risen by 3.5% in the past year.  Consumer spending is gradually slowing, but it is certainly not collapsing.  It should slow further in the months ahead as the Fed presses on with additional rate hikes. 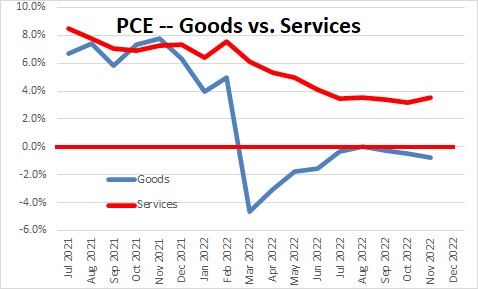 The Fed recently raised the funds rate to 4.4%,     But at 4.4% the funds rate is still  highly accommodative because the core inflation rate has risen 5.7%.  Thus, the real funds rate is -1.3%.That is not going to slow the pace of economic activity very much.  For this reason we expect the Fed to keep raising the funds rate to about the 6.0% mark by the middle of this year. 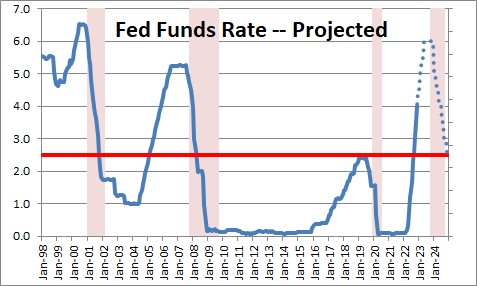 Both the University of Michigan’s consumer sentiment index and the Conference Board’s measure of consumer confidence show a modest rebound in the past couple of months.  The two series can diverge from one month to the next, but the trends are similar. 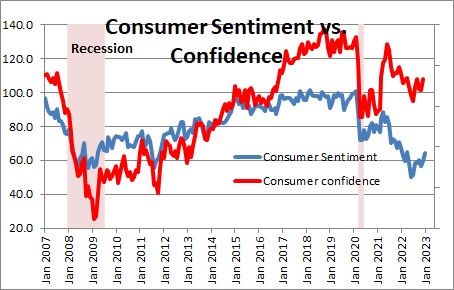 We expect GDP growth to climb 2.2% in the fourth quarter of last year.  We look for 1.0% GDP growth in 2023 as the real funds rate remains negative through midyear and as the economy continues to crank out jobs.

Consumer expectations for six months from now rose from .59.9 to 62.0.

Consumers’ assessment of current conditions rose from 59.4 to 68.6.