With the manufacturing sector having weakened from the imposition of tariffs, the engine of growth for the economy in 2019 has been consumer spending which has climbed at a 2.9% pace in the first three quarters of the year.  The question is whether the consumer can continue to spend so freely.  Many economists suggest that going forward slower growth in corporate profits will curtail firms’ willingness to hire.  With smaller employment gains, consumer income will grow less rapidly and, hence, consumer spending will be negatively impacted as well.  Sorry.  We don’t buy it.  We anticipate consumer spending to continue at a solid 2.5% rate in 2020.

It is true that corporate profits growth slowed this past year to 2.7%.  The combination of the General Motors strike and the woes at Boeing have both weighed on earnings.  Looking ahead the General Motors strike has ended and Boeing expects to be flying the 787-MAX again by the beginning of next year.  The Fed has cut short-term interest rates by a total of 0.75% since midyear to 1.6% which represents a negative real rate.  Long-term interest rates have fallen to near record low levels.  And while we can never be certain about the outcome, it appears that the U.S. and China are on the brink of some sort of a trade agreement.  As we see it, corporate earnings can easily rebound and climb by 6.0% in 2020.  If so, the idea that payroll employment will continue to slow seems unlikely.  We expect it to stabilize at 150-160 thousand jobs per month.  Meanwhile, firms will be unable to find enough workers to satisfy demand, which means that they will continue to boost wages in an effort to attract workers that may still be on the sidelines and/or poach workers from other firms.  This will keep consumer income climbing steadily throughout the year. 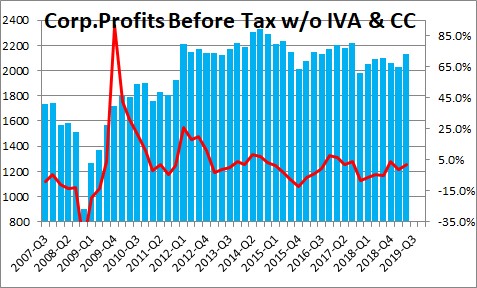 Meanwhile, the consumer’s financial position appears to be in great shape.  The Federal Reserve Bank of New York does a quarterly report on household debt.  In the third quarter consumer debt outstanding continued to climb to a record high level and that seems to worry some economists. 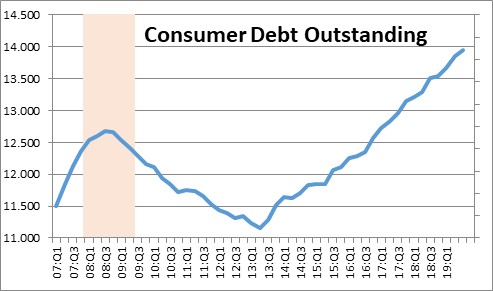 In the past year consumer debt has risen 3.2%, but that is roughly in line with growth in nominal GDP (or income).  As a result, consumer debt in relation to GDP has been steady at 65% for the past five years.  Consumers can take on additional debt if their income is climbing at a roughly comparable pace. 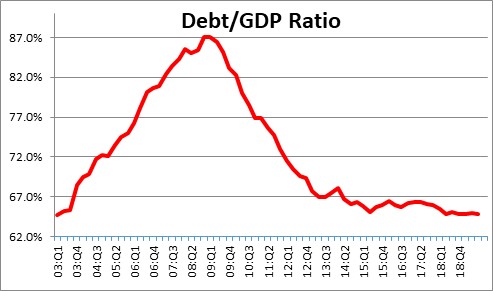 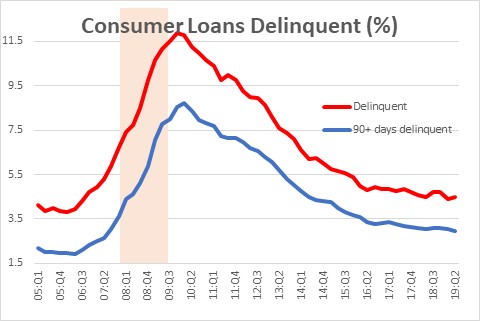 Meanwhile, lending institutions, if anything, are slightly tightening their lending standards.  The average credit score for a mortgage loan in the third quarter was 765 and 77% of mortgages made in that quarter had a credit score of 720 or higher.  The comparable average credit score for an auto loan was 711.  There is no hint that lending institutions are feeling compelled to lower their credit standards to keep the loan portfolio growing. 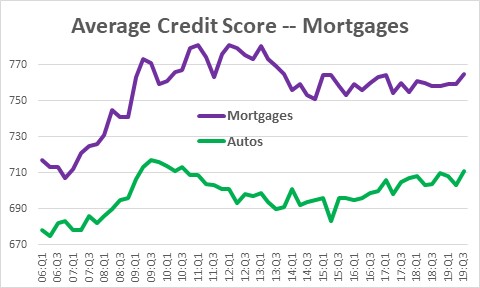 Finally, total loan growth at banks has been about 5.0% for some time and is fairly even by type of loan.  Consumer loans are growing 5.4%, mortgages (by far the largest category of bank lending) have risen 3.3% in the past year, and commercial and industrial loans have been expanding at a 5.9% pace.  All of these growth rates have been relatively steady for several years.  Nice, even, sustainable loan growth. 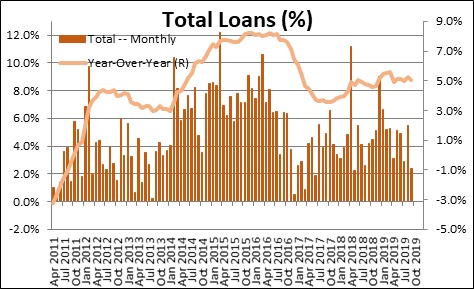 While most economists have abandoned the idea of a recession in 2020, most continue to envision a further growth slowdown to 2.0% or a bit less.  A major reason underlying these slow growth forecasts is concern that consumers cannot keep up their pace of spending.  We disagree.  Jobs should continue to climb by about 160 thousand per month next year.  Compensation should rise by 4.5%.  Consumer confidence is high.  The stock market is at a record high level.  Mortgage rates are extremely low at 3.7%.  The savings rate exceeds 8.0%.  Consumer debt in relation to income remains at a very low level.  The consumer has been, and should continue to be a driving force for economic activity in 2020.  We expect consumer spending to climb 2.5% in 2020 while GDP rises by 2.4%.