News about the number of reported cases of the corona virus and the number of deaths attributed to it change daily.  Because China is the world’s second largest economy there is no doubt that Chinese GDP growth will be slashed in the first quarter of the year or even beyond if China is unable to quickly curtail the virus’s ability to spread.  But what about its impact on the United States?  Many economists suggest it could slice first quarter U.S. GDP growth by 0.5%.  We suspect that estimate is too high.  While some early estimates are around the 1.5% mark, we suggest that, as usual, economists are unduly pessimistic.  We continue to anticipate first quarter growth of 2.5%.

Clearly, the markets are sensitive to any new information about the virus – good or bad.  The most important piece of information to us is that, thus far, the virus has largely been confined to China.  The World Health Organization reported Thursday that the total number of cases in China had jumped by almost 14,000 in a single day to the 60,000 mark.  That initially appeared troublesome but it turns out the increase was largely attributable to a change in how cases are being diagnosed.  Now, a trained medical professional can classify a suspected case as clinically-confirmed.  Previously, only laboratory confirmed cases were reported.  The change presumably allows clinicians to report cases more quickly.  The increase does not suggest a significant change in the trajectory of the outbreak.  However, this re-estimation of the number of people infected has generated skepticism regarding the accuracy of the official Chinese data.

Chinese officials also indicated that 80% of its total cases and 96% of its reported deaths have been in the Hubei province.  But if there are only 12,000 cases — 20% of 60,000 — outside of the Hubei province, in a country with a population of 1.4 billion, it seems clear to us that even if the number of cases outside Hubei is significantly understated, the virus has been fairly well isolated.

Furthermore, Chinese officials indicate that 80% of the total corona virus cases were mild with symptoms that require little or no medical attention.

So what will be the impact of the virus on Chinese GDP growth?  First quarter growth will get hit hard, which could trim GDP growth for the year from 6.0% to perhaps 5.5%.

We are encouraged that while the various Chinese stock exchanges fell sharply early on, they have partially recovered and are now only about 4.0% below their late January level.   That is a relatively small decline.  Chinese investors apparently believe that the government’s efforts to contain the virus have been relatively successful, 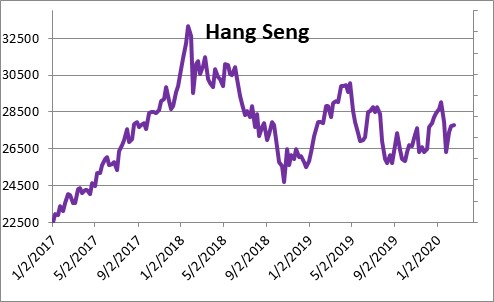 As of now, there are only 447 cases outside China, and of those 218 are passengers on the Diamond Princess. Furthermore, while there have been 1,380 deaths worldwide only three of those deaths occurred outside China.

So what will be the impact on the U.S. economy?  Some global U.S. companies will experience disruption in their supply chains for a variety of different goods from electronic products to toys, pharmaceuticals, and iPhones.

In addition, Starbucks has closed more than half its stores in China.  Disney has closed both the Shanghai Disney park and the Hong Kong park.  China is the second largest motion picture market and all theaters have been closed to prevent the spread of the virus.  Chinese tourism to the U.S. and Europe has been slashed as air carriers have canceled all flights into and out of China. 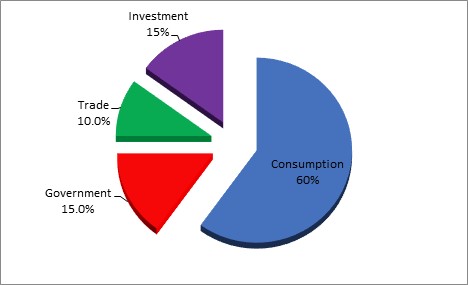 Despite all the talk about the virus triggering a global pandemic, the various U.S. stock markets have shrugged off the potential bad news and continue to climb to record high levels. 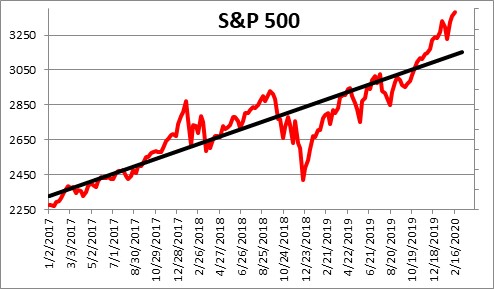 Meanwhile, the yield on the Treasury’s 10-year note has declined to a near record low level of 1.6%. 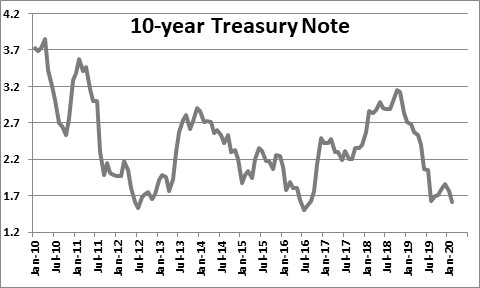 Some of this unprecedented strength in both the stock and bond markets may well reflect foreign investors shifting to the relative safety of dollar-denominated investments.  The impact of the corona virus on the U.S. economy will be much smaller than the hit on the Chinese economy and on neighboring countries in Asia, as well as in Europe.

We certainly do not want to diminish the impact of a virus that has killed almost 1,400 people worldwide.  But our job is to estimate growth in the U.S. economy.  At the moment, it appears that the impact of the corona virus on the United States economy will be surprisingly small and we continue to anticipate first quarter growth of 2.5%.