The stock market has plunged 14% since reaching a record high level on Valentine’s Day. Such a precipitous decline in nine business days is unnerving.  It makes economists consider lowering their GDP growth forecasts.  It makes investors contemplate a more defensive portfolio strategy. The focus has been almost exclusively on the total number of cases of the corona virus and the number of deaths caused by it.  But is this a stock market event?  An economic event?  Or some of both?  Our sense is that this is largely a long overdue stock market correction triggered by vastly exaggerated media hype about the impact the corona virus is likely to have on the U.S. economy.  While there will be a significant drop in global economic activity (primarily in China but perhaps also in Korea and perhaps Italy), we believe the impact on the U.S. economy will be both modest and relatively short-lived.d

As of February 28 there were 83,907 cases of the corona virus worldwide.  That number continues to climb daily and that seems to be what is scaring everyone.  https://www.worldometers.info/coronavirus/ 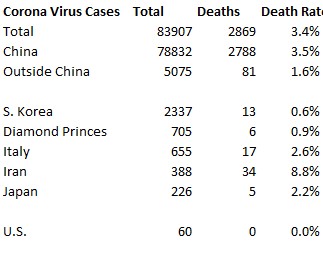 To us, the focus on the total number of cases is misplaced.  People contract the virus.  Most recover but some die.  The number of active cases is the total less the number of people who have recovered or died.  It is an important concept because it represents the number of people who are still able to transmit the disease.  Active cases reached a peak of 58,750 on February 17 and have since fallen 25% to 44,166.  This suggests that the likelihood that the virus will gather momentum and spread more quickly has diminished considerably 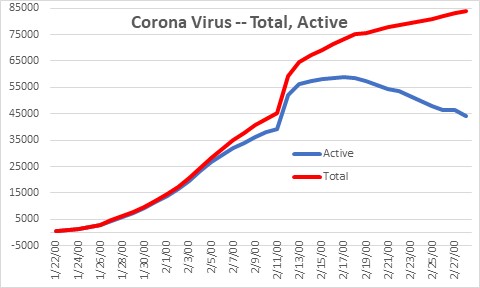 But think about those numbers for a minute.  There have been 16,000 to 41,000 deaths caused by the various strains of the flu thus far in the flu season, but none of them were caused by the corona virus.  Nevertheless, all the mainstream press wants to focus on is the corona virus.  There is a deadly respiratory virus circulating throughout the U.S.  — but it is not the novel corona strain.

We readily concede that we are not physicians or infectious disease specialists so we have no credibility from a medical viewpoint.  We are numbers people.  The numbers suggest several things.  First, the disease is still largely confined to China with only small numbers of cases reported outside China.  Second, the number of active cases has fallen every day since mid-February.  As that number declines the number of people that can spread the virus continues to drop.  Finally, there have been 16,000 to 41,000 deaths related to the various influenza strains in the U.S. thus far this year but none of them caused by the corona virus.  Even if the number of people seriously affected by the corona virus is off by a factor of ten, the corona virus is not nearly as lethal as the ordinary flu.  These data are not consistent with a rapidly-expanding problem.   Instead, in our opinion, the problem is starting to subside.

Interestingly, the CDC did not characterize the 2018-2019 flu season as a pandemic.  Indeed, it said that “Peak activity during the 2018-2019 influenza season was classified as having moderate severity across ages in the population.”  There is no reason it should characterize the current situation as a pandemic.  We conclude that the CDC and the mainstream media are the sources of the fear that is currently gripping the markets, and that the fear is largely unwarranted. 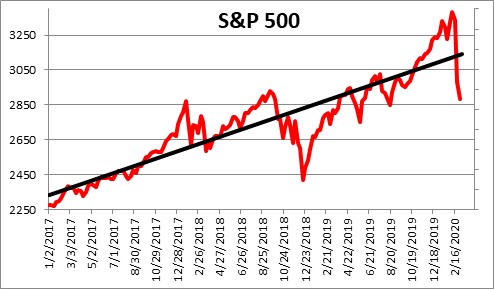 Unfortunately, fear can generate some temporary economic weakness.  But, as we see it, the economic fundamentals remain strong.   Sure, there will likely be a modest hit to second quarter GDP growth in the U.S. as supply chains get interrupted.  Exports to and imports from China will slide as that country tries to contain the virus.  But trade is only 10% of U.S. GDP.  Thus far there has been no softening of the labor market as initial unemployment claims have remained steady through the end of February.  If the economy continues to crank out 170 thousand jobs a month and long-term interest rates remain at record low levels, consumer spending should continue to be solid.  Consumer confidence remains high.  Gas prices have plunged.  The housing sector is on fire as both sales and construction are gathering momentum.  Government spending is climbing at a moderate pace.

Despite our rather sanguine economic view the markets at the moment are in a free fall, driven by a fear which, in our view, is unwarranted.  A good gauge of that fear factor is the VIX index of market volatility.  It tends to average about 15 in normal times. but it occasionally spikes when something spooks investors.  In recent years we have had the VIX index surge around the time of the U.S. election in late 2016, in early 2018 as more rapid GDP growth caused the Fed to raise the funds rate, and in late 2018 when the Fed tightened for the final time and the government entered a prolonged shutdown.   Its current level of 46 is well above the level of roughly 30 which in the past has signaled significant market turning points.  For this reason we suspect the end of the selloff is not far distant. 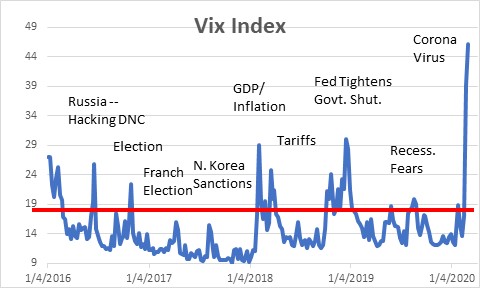 The market hysteria in the stock, bond, and commodity markets combined with soft economic data largely out of China, has caused some economists to call for rate cuts by a number of the world’s major central banks in coming months.  The market expects three rate cuts by the Fed by midyear lowering the funds rate to the 1.0% mark.  While the Fed will say soothing words at the March 17-18 FOMC meeting, we do not expect actual rate cuts for several reasons.  First, the problems in the global economy could be transitory.  The Fed should buy some time to see the extent to which the virus is spreading.  Second, the global slowdown has not been caused by interest rate levels that are too high.  For that reason rate cuts will not provide much lift to a global economy hit by a flu virus.   Finally, if the funds rate should fall to 1.0% by midyear (from 1.5-1.75% currently) the Fed will be using precious ammo that it will need to fight slower growth when it actually materializes.  Having said all that, this group at the Fed seems to cut rates at the first hint of trouble.  They claim to be “data dependent” in making their rate decisions.  If that is truly the case, they should hold their fire.  I guess we will see.

It is scary out there but hang tough.  Fear is way out of alignment with reality.