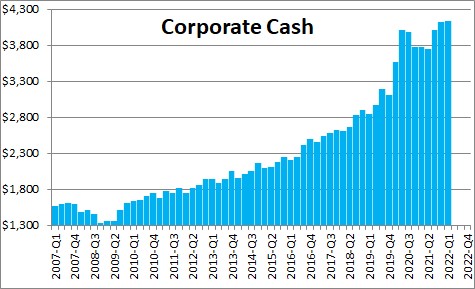 Corporate cash holdings in the first half of 2020 as the government quarantine basically caused the economy to stop dead in its tracks.  Firms needed to raise money wherever they could to keep them going until such time as virus eased its grip and the economy returned to normal.  But since the recession has ended and been replaced by inflation fears and a significant increase interest rates, the possibility of a recession sometime in the not too far distant future, and the war between Ukraine and Russia, uncertainty has risen dramatically and firms have maintained high cash levels which in the first quarter of this year totaled $4.1 trillion.

The ratio of corporate cash to assets peaked at 13.8% in the second quarter of 2020 as a result of the need to raise cash as the corona virus was spreading rapidly.  That was far higher than their long-run average of 10.4% (below).  Corporations have begun to draw down those cash assets slightly but given the uncertainty described above from a variety of sources it has dropped to 12.7% in the first quarter versus its long term average of 10.4%.  It it likely to decline further in the quarters ahead as that cash gets redeployed into investments or stock buybacks. 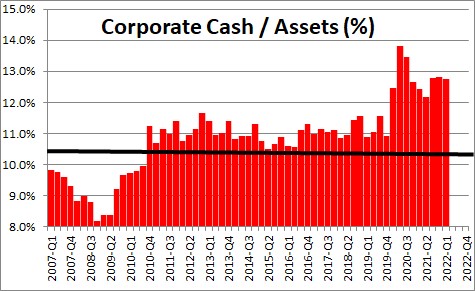