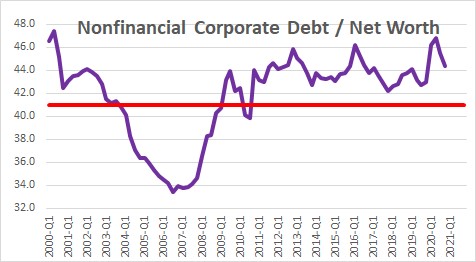 Economists like to keep an eye on the amount of leverage amongst corporations.  When corporations take on huge amounts of debt in relation to their net worth, any economic downturn will be much more severe than it would otherwise be as corporations become unable to service their debt from cash flow.

This ratio rose sharply in the first half of last year during the recession from 43.0% at the end of 2019 to 46.8% in the second quarter.  Corporations needed to borrow to make sure that they had ample liquidity to keep them afloat until the corona virus was finally got under control, Now the vaccines seem to be doing just that so, as a result, that debt to net worth ratio has declined somewhat and in the fourth quarter of 2020 is 44.4%.  It should continue to fall as we move throughout 2021 as both life and the economy begin to return to normal.  This compares to an average ratio of debt to net worth since 2000 of 41.0%.