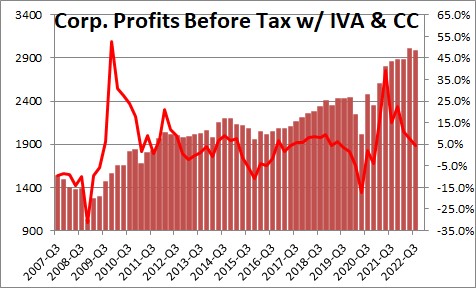 Corporate profits from current production (corporate profits before tax with inventory valuation and capital consumption adjustments) fell by $31.6 billion in the third quarter from a record high level of $3,001.3 billion which works out to an annualized rate of decline of 1.1% after after having risen by $4.6 in the first quarter.  During the last year profits on this basis have risen 4.4%.  The IVA and CC adjustment deals with the difference in depreciation allowances used for accounting and income tax purposes.

In the wake of all the fiscal stimulus packages and the vaccine finally bringing the virus under control, we saw GDP growth of 5.5% last year and we expect 0.7% GDP growth in 2022 and 1.0% growth in 2023.  At the same time core inflation should rise about 6.1% this year and 4.4% in 2023 which should give firms considerable pricing power.  However, the combination of further rate increases through the first  half of next year and a reluctance of firms to lay off workers despite slower economic activity will be negative factors for a while.  Eventually, firms will have to start laying off bodies.