COVID continues to take its toll around the globe largely amongst unvaccinated individuals and countries. The number of cases has been rising in China and officials there recently shut down the Ningbo-Zhoushan port.  The spread of the virus has caused the IMF to reduce substantially its projected GDP growth rate for Asia (including China, but especially for India and the emerging economies in Asia collectively known as the ASEAN 5)  by 1.1% relative to what it expected in April.  But it also raised GDP growth for advanced economies by 0.5%.  World GDP growth was unrevised at 6.0%.  The difficulties in China seem likely to prolong many of the supply shortages in the U.S.  Manufacturing firms have already noted that delays in getting the required materials need for production from China and elsewhere are the longest they have been in 50 years.  While some manufacturing firms expected the supply constraints to fade as the year progresses, that may no longer be the case.  Such delays are likely to continue throughout 2022.  Having said all that, the U.S. economy still has a head of steam and our GDP outlook remains robust with GDP growth of 8.9% and 10.5% for the final two quarters of this year and 5.1% GDP growth in 2022.  But at the same time protracted shortages are likely to exacerbate and extend the already heightened outlook for the core CPI inflation rate which we currently estimate at 5.3% and 3.7% for this year and next.

COVID continues to spread in waves around the globe.  While case numbers have risen sharply in the U.S. the death rate has barely budged.  The Delta variant appears to be highly contagious but its impact is less deadly than the initial version. 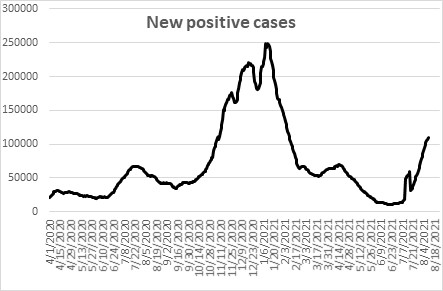 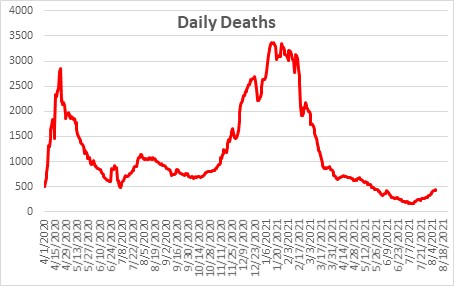 Given the usual breathless reporting by the press, it is worth contemplating the notion that Americans will suddenly cut back on everything from air travel to dining out.  Thus far there is no evidence of that happening.

The TSA data suggest that Americans continue to fly at a rate that is about 80% of what it was in the pre-pandemic year of 2019 and that number has been steady since mid-July.   For example, in the week ending August 8, 2.0 million travelers went through U.S. airports.  In 2019 it was 2.5 million travelers.  There is no evidence that COVID has discouraged Americans from following through on their travel plans. 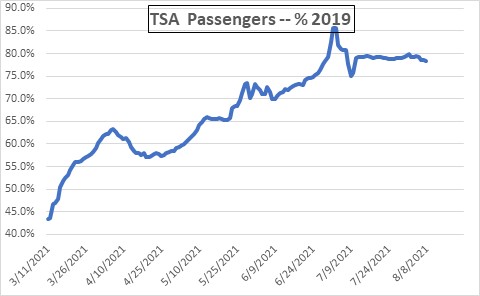 Ditto for Open Table reservations which have remained steady in the past couple of weeks at a pace slightly below what it was in 2019.  As we see it, the current wave of infections is not causing any noticeable change in consumers’ willingness to spend despite widespread negative press coverage. 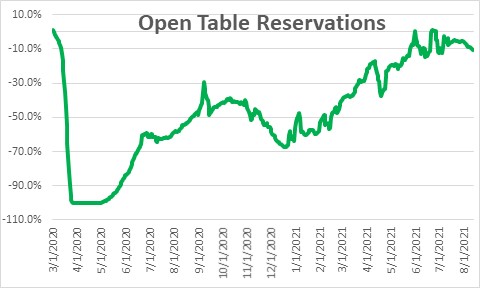 In China the pickup in the number of cases is relatively small but it has impacted about one-half of the mainland’s 31 provinces.  The majority of China’s vast population is vaccinated but officials want to quickly contain the latest outbreak and have resorted to mass testing and targeted lockdowns.  Whether that will be successful remains to be seen.  Meanwhile, they shut down the Yantian port in June after a COVID outbreak, and recently closed the Ningbo-Zhoushan port.  Such action raises the specter of additional port closings if all does not go according to plan. The Port of Los Angeles saw its volume dip in June and is bracing for another potential drop.  The port shutdowns slow the flow of everything from perishable food to electronics.  For the moment ships are being redirected to other ports in China but the potential danger is obvious.

The rapid spread of the virus, renewed shutdowns, and port closings in China have caused the IMF to reduce its GDP growth in that country for this year by 0.3%.  The rapid spread of the virus has also caused the IMF to reduce GDP growth for India by 3.0%, and for the ASEAN-5 countries (Indonesia, Malaysia, Philippines, Thailand and Vietnam) by 0.6%.  GDP growth for Asia as a whole has been lowered by 1.1% to 7.5%. But GDP growth for the largely vaccinated advanced countries has been revised upwards by 0.5%.  The IMF boosted its estimate of GDP growth for the U.S. by 0.5% to 8.0%.  The biggest upward revisions were for the U.K. (+1.7) and Canada (+1.3%).

GDP growth in the U.S. is expected to remain vibrant for the foreseeable future because consumers still have ample savings to fuel growth for a year or more even in the absence of job gains which will further enhance income.  In the housing sector demand far exceeds supply and that shortage can only be remedied by a faster pace of housing starts.  They should quicken as the year progresses, but builders will continue to be plagued by a shortage of workers.  The same is true in the manufacturing sector – demand far exceeds supply.  Manufacturers need to dip into inventories to satisfy part of the demand from their customers.  But that process can only go so far.  Those inventory levels eventually need to be replenished.

But some economists note that the expiration of federal unemployment benefits next month will reduce consumer income and, hence, the pace of consumer spending.  But it seems to us that given a record number of job openings, those workers who lose benefits can easily replace the lost income by going back to work. We do not envision any significant drop in the pace of consumer spending in the final few months of this year. 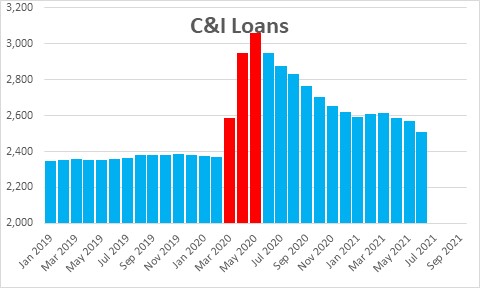 But, as it turns out, the recession lasted just two months and the government provided ample funds to support businesses.  As a result, firms today have record amounts of cash. 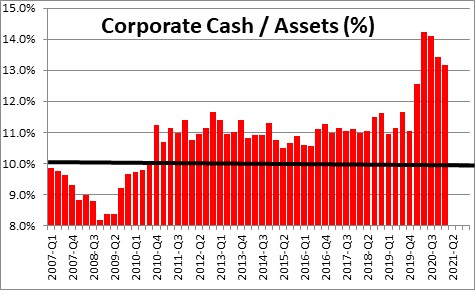 Yes, consumer and corporate borrowing have declined, but so what?  It would be grossly incorrect to conclude that banks were being extremely stingy and that an unwillingness to lend was going to curtail GDP growth in the months ahead.

And still others cite the big drop in commodity prices as further signs of emerging weakness.  But the drop in commodity prices reflects the significant slowdown in GDP growth in Asia which is a heavy user of commodities.  It will have little impact on the developed countries.  As usual, the economics profession rushes to predict pending disaster.

What we do see is further upward pressure on the inflation rate from these continuing supply interruptions.  Yes, commodity prices have fallen recently because of an expectation of a further slowdown in growth in Asia.  But expectations for growth in the region have already been reduced sharply.  It will require a worst case scenario to chop them further.  The drop in commodity prices is likely to prove temporary.

The virus has triggered renewed challenges around the globe but especially in Asia.  While the developed world should experience only a modest setback, Asia is getting hit hard.