The recently passed “Inflation Reduction Act” (IRA)  is being hailed by President Biden, Democrats, and climate supporters as a game changer.  It will allegedly reduce inflation, shrink the deficit, reduce carbon emissions and improve our climate.  We are not convinced it is going to accomplish any of these objectives.  Our biggest objection to this bill is that it further expands the role of the federal government in our society.  We also have several specific problems with this bill and the recently released 10-year budget documents.  First, the tax increases in the IRA will discourage investment which is crucial for the long-term health of our economy.  Second, the increased corporate taxes in the IRA will probably be avoided by a team of talented accountants which means the bill will not boost tax revenue nearly as much as expected.  Third, government  spending increases in the IRA for the first couple of years and the so-called budget reduction comes later, but the budget improvement never seems to materialize.  Finally, the 10-year budget horizon does not include the possibility of a recession which is almost inevitable within the next year or so.  When that occurs the budget deficit will explode.  We are all for deficit reduction, but the recent IRA legislation is unlikely to achieve that objective.

The Congressional Budget Office recently released its 10-year budget outlook.  Deficits this year and the next couple of years shrink to about $1.0 trillion as the pandemic stimulus disappears.  The deficits gradually rise to $2.3 trillion by 2032.  It is amazing to us that shrinking the deficit to $1.0 trillion is now viewed as a victory. 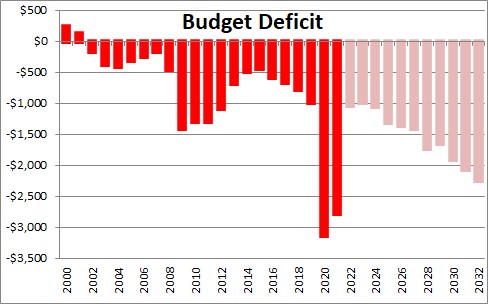 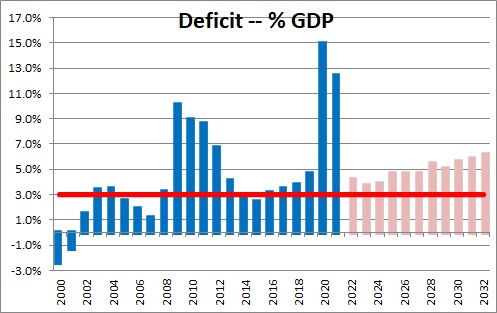 We have gotten so used to seeing $1.0 trillion budget deficits for so long that we no longer seem to care.  The problem is that every year that the Treasury encounters a budget deficit it must issue an equivalent amount of debt.  If it has a $1.0 trillion deficit it must issue an additional $1.0 trillion of debt.  As a result, debt in relation to GDP – or essentially debt in relation to our ability to pay it back – continues to climb.  For fiscal 2022 the debt/GDP ratio should be 98%.  Economists suggest that a debt/GDP ratio of 50% is sustainable over time, and they worry when it exceeds the 90% mark.  We blasted through the 90% mark in 2020 and the budget forecasts envision that ratio climbing to 109% by 2032. 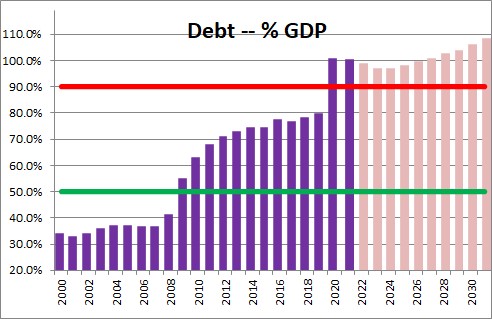 In a separate document of long-term budget deficits the CBO estimated that, in the absence of any policy changes, debt as a percent of GDP could climb to 185% by 2052.  The previous record debt/GDP ratio was 106%  after World War II.  Once wartime spending receded, the ratio quickly returned to a  more sustainable level.  But today entitlement spending – like Social Security, Medicare, Medicaid, unemployment benefits, Veterans benefits, and childcare – are about 70% off all government spending and cannot be easily reduced.  So-called discretionary spending – including defense — has already been shrunk to the bone.  To us, a debt/GDP ratio that climbs to 109% by 2032 and soars to 185% by 2052 is asking for trouble. 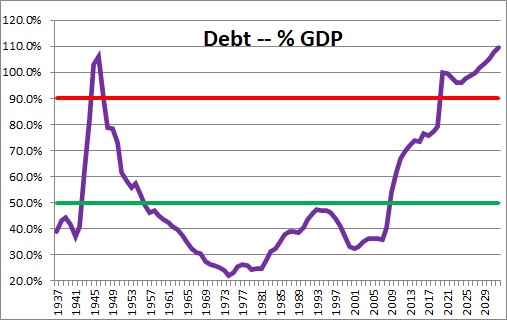 Budget deficits are the difference between tax revenues and expenses.  So where is the problem?  Too few tax receipts?  Or excessive spending?  There is no ambiguity here – too much spending. Since 1960 tax revenues have averaged 17.5% of GDP.  For the upcoming 10-year budget period they are expected to average 18.1% or 0.6% higher than they have been historically.  To argue that the government needs additional tax revenue is absurd. 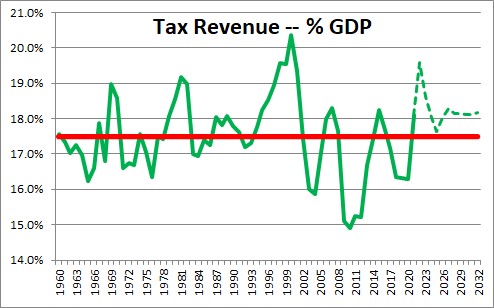 On the expenditures side, since 1960 government spending has averaged 20.5% of GDP.  For the upcoming 10-year budget period spending is estimated to average 23.1% or 2.6% higher than the long-term average. 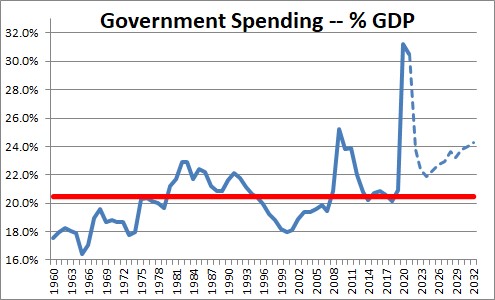 IF budget deficits for the upcoming 10-year period average 5.0% and they should be 3.0%, the desired path to achieving that objective should be to reduce spending by 2.0%.  But to shrink the deficit and spending by that amount requires a willingness to cut entitlements and that is not going to happen,  Neither Democrats nor Republicans have indicated any appetite for such action.

Keep in mind that these budget forecasts do not include the possibility of a recession.  With the Fed continuing to raise interest rates, a recession is an almost sure bet within the next couple of years.  When that happens tax revenue declines and government spending increases.  Thus, the deficit and debt forecasts presented by the CBO should be viewed as a best case scenario.  Reality is likely to be far worse.

That brings us to the recently enacted “Inflation Reduction Act”.  It seems to us that this bill is misnamed.  Any inflation reduction is likely to be limited at best.  Rather, it approves a number of climate provisions that will be paid for by tax increases.  With respect to climate warming, it strikes us that anything the U.S. does will do absolutely no good unless major polluters like China and India are on board.  That is simply not going to happen.  Also, the U.S. government does a very bad job of picking winners and losers.  Remember Solyndra a decade or so ago?  The company was billed as a leader in producing clean energy but it was unable to compete with the private sector in the production of solar panels.

The tax hikes incorporated in this bill are, in our opinion, troublesome.  First, there is the 15% minimum tax on companies.  Big companies that would presumably generate the most additional tax revenue are also able to hire the accounting expertise to avoid the tax.

The same is true for the 1% tax on stock buybacks.  Companies that have more cash than desired can do one of three things.  They can invest it,  increase their dividends to shareholders, or buy back some of their stock.  The bill’s intention is to force these companies to use their spare cash for investment.  But if an attractive investment opportunity were available, the company presumably would have already chosen to do so.   The 1% tax on buybacks will encourage companies to hang onto surplus cash which might ultimately be spent on an unprofitable investment.  If they opt for a stock buyback the smart accountants will, once again, find a way to avoid the tax.  We are skeptical this will generate much additional tax revenue.

With an election looming in just three months the political posturing has just begun.  The  “Inflation Reduction Act” will be hyped as a game changer in an effort to entice voters. But it is unlikely to improve the climate or reduce inflation, and by increasing corporate taxes it will reduce investment.  This is not the path we should be on.