Do Not Fear the Taper

With each additional tidbit of data economists and market participants reevaluate the timing and speed with which the Fed will “taper” its monthly purchases of securities.  It is true, that reducing its securities purchases represents the beginning of a change in the direction of monetary policy from an extremely “accommodative” stance to something that is more “neutral”.  But what the markets should be concerned about is that point in time when the Fed actually raises short-term interest rates in an effort to slow the pace of economic activity and/or reduce the rate of inflation.  But Fed officials have been quick to point out that rate hikes are not on the horizon until at least 2023.  The slow, gradual tapering process will have no discernable impact on the pace of economic activity, and should raise long-term interest rates only slightly.  While such action could trigger some sort of short-term stock market “correction”, the reality is that still robust GDP growth, a moderate pick up in the inflation rate, and a Fed pledge to maintain low rates far into the future will continue to produce solid growth in corporate earnings and drive the stock market steadily upwards.

Lowering the funds rate to essentially 0% and purchasing securities were emergency measures taken – appropriately so – during the course of the recession in March and April 2020.

Currently the Fed purchases $120 billion of a combination of U.S. Treasury and mortgage backed securities each month.  By so doing, it steadily increases its balance sheet and, therefore, its policy becomes progressively more accommodative. 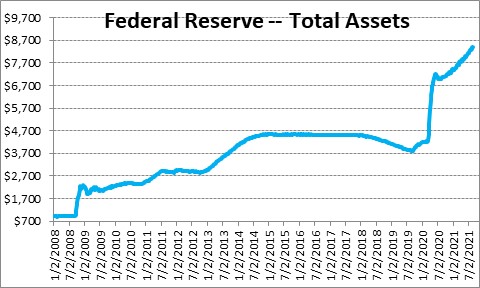 This means that in September 2021 the Fed still has its foot on the accelerator despite 6.6% GDP growth in the second quarter, robust GDP growth likely for the third quarter (we currently expect 8.0% growth), and a core inflation rate that has climbed to 4.2% and is seemingly headed higher.  It is time for the Fed to revert to a somewhat more neutral policy stance.

Most economists expect the Fed to gradually reduce its monthly purchases of securities from $120 billion per month beginning in January of next year to $0 by December.    This is the first step in shifting policy back to neutral.  But even in December 2022 the Fed will still have a 0% funds rate.  Its policy will remain highly accommodative.  So what would constitute a “neutral” funds rate?  To answer that question we tend to look at the “real” or inflation-adjusted funds rate.

Today the funds rate is essentially 0%.  The year-over-year increase in the CPI is 5.3%.  Thus, the real funds rate is -5.3%.  But over the past 20 years, the real funds rate has averaged -0.5%.  This means that, on average, during periods when the Fed has both eased and tightened, the funds rate has averaged 0.5% lower than the inflation rate.  We would suggest that constitutes a “neutral” real funds rate.  If the Fed is correct and the recent run-up in inflation returns to 2.0% next year, then a “neutral” funds rate should be about 0.5% less than that or 1.5%.  But 0.0% is not 1.5%.  Fed policy will remain highly accommodative long after the Fed stops purchasing government securities. 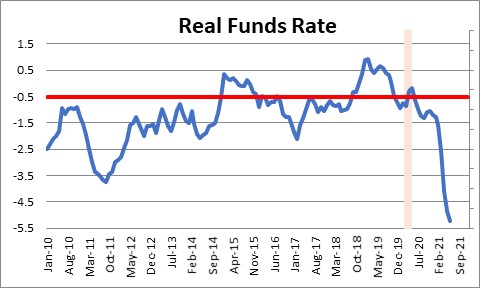 The Fed suggests that anticipates two rate hikes in 2023 which would lift the funds rate to 0.6%.  But 0.6% is also not 1.5%.  Fed policy is likely to remain in accommodative mood through the end of 2023.  And with a presidential election looming in November 2024 you can bet that the Fed is not going to push rates much higher even in that year.  This is September 2021.  We are speculating about something that might, or might not happen, three years from now.  That makes no sense.  For now, we should plan on Fed policy remaining highly accommodative through the end of 2023.  So quit fretting about when and how rapidly the Fed is going to reduce its purchases of government securities matters little.  That is small potatoes.

There are lots more important things to worry about: