Currently, economists and the Fed are fretting about the fact that short rates are now higher than long rates and the yield curve has “inverted”.  The funds rate is at 2.13%.  The yield on the 10-year note is 1.7%.  Thus, the curve is inverted by about 0.4%.  An inverted curve is almost always a sign of an impending recession.  While that is true, we believe people are not asking why the yield curve has inverted.  Typically, when the economy overheats and inflation is on the rise, the Fed steadily raises short-term rates, the yield curve inverts and, eventually, the economy slips over the edge into recession. In short, Fed policy becomes “too tight”.  But that is not happening today. 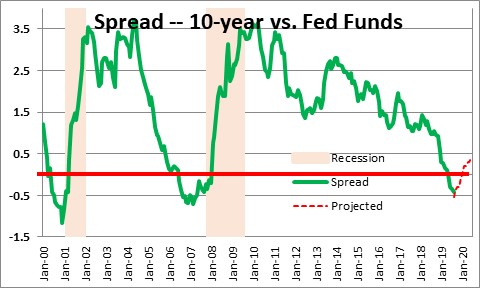 The Fed has gradually been raising rates for the past couple of years.  It began to boost rates in December 2015 when the funds rate was at 0.0% and it eventually lifted that rate to 2.25-2.5% in December of last year.  The Fed believes a “neutral” level for the funds rate – one at which it is neither stimulating nor retarding the pace of economic activity – is 2.5%.  But the current level is not even remotely close to the peak level of the funds rate prior to any of the recessions in the past 30 years.  The funds rate peaked at 8.5% in 1990, 6.5% in 2000, and 5.25% in 2008.  Each of those peak levels was lower than the prior peak level.  Could it be that 2.25-2.5% is now high enough to trigger a recession?  We doubt it. 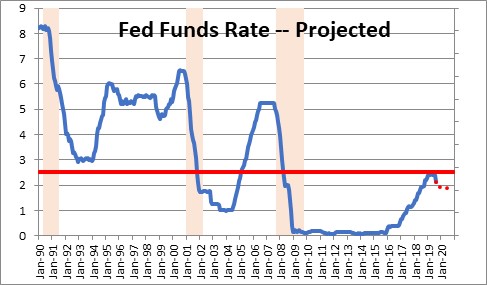 Perhaps a better way to judge whether the funds rate is “too high” is to look at it in “real” terms, i.e., adjusted for inflation.  On that basis the real funds rate peaked at about 3.0% in each of the past three downturns.  In other words, the Fed needed to boost the funds rate three percentage points higher than inflation rate to push the economy over the edge.    At its peak last month the funds rate was 2.4%, the year-over-year increase in the CPI was 1.9%.  Thus, the real funds rate was 0.5%.  This does not seem even remotely close to the 3.0% danger point.  To argue that interest rates are “too high” and thereby retarding the pace of economic activity sounds absurd to us. 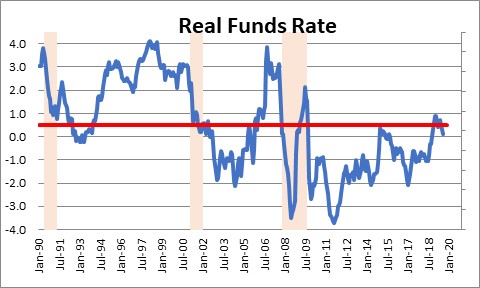 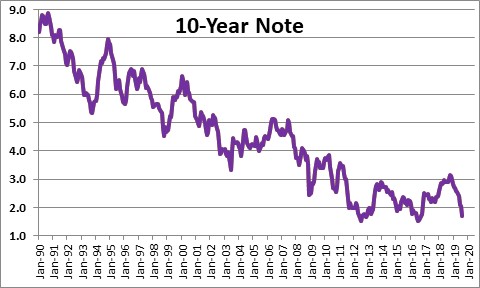 Mortgage rates tend to track the yield on the 10-year note.  They have recently slipped to 3.6%.  This rate reached a low point of about 3.5% in late 2012 and then again in 2016.  Its current low level is close to that record low level and is not only inducing another wave of mortgage refinancing, it is luring potential home buyers back into the market.

Given the current levels of both short- and long-term interest rates and an economy that is still on relatively solid ground, there is no need for lower interest rates.  The economy did not need the rate reduction that occurred last month, nor does it need the next likely rate cut in September.  Because the economy is at full employment there will be little, if any, economic stimulus from the latest Fed action.  Not only that, the Fed will have used up 0.5% of its potential to lower interest rates when it really needs the additional stimulus at some point down the road.

While President Trump chooses to blame the Fed for the economy’s 2.3% GDP growth rate in the past year compared to the 3.0% pace he would like, the problem is not that interest rates are too high.  Trump would do far better to examine his trade policy which has crippled the manufacturing sector.  The economy continues to perform well despite the trade-induced headwind.  We expect 2.7% GDP growth this year.  Having said that the economy would be doing better if Trump could reach a trade deal with China or, at the very least, stop ratcheting upward the level of tariffs being applied to Chinese goods entering the United States.

In our view the markets should stop worrying about a recession — something that is not going to happen.  Thus, any pullback in the stock market should be viewed as a buying opportunity rather than the beginning of a downturn.  The S&P 500 certainly feels like it has fallen precipitously in the past couple of weeks, but the reality is that it is only 4.0% below its recent record high level.  Furthermore, long-term interest rate levels should be viewed by corporate leaders (and perhaps the U.S. government) as an opportunity to raise needed cash at the lowest level in years.  This is not adding up to a recession scenario in our book. 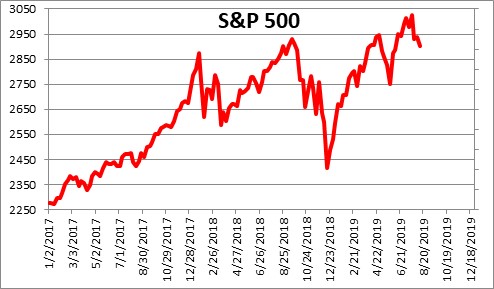