For years the financial markets followed the rule, ”Don’t  Fight the Fed”.  When investors think the economy and inflation will behave one way but the Fed sees something different, the Fed will eventually win.  Today that divergence of opinion is as wide as ever.  The markets think that the peak in the funds rate is near and the Fed will begin to lower the funds rate in the second half of the year.  The Fed says it does not plan to start easing until sometime in 2024.  Who is right?  In this case we think the Fed’s view of the economy and inflation is probably more accurate.

Using the fed funds rate futures contracts as a guide, investors believe that with two small 0.25% hikes in the funds rate by midyear, the economy will slow enough and inflation will subside with sufficient speed that the Fed will be in a  position to cut the funds rate in the second half of the year.

For that to occur, the economy has to register very slow growth.  Most economists anticipate GDP growth this year of about 1.0%.  We concur.  But the economy still has considerable momentum.  Third quarter GDP growth was 3.2%.  Fourth quarter appears to be solid at about 2.2%.  GDP growth in 2023 should slip to the 1.0% mark but, thus far, the economy is showing few signs of a significant slowdown. 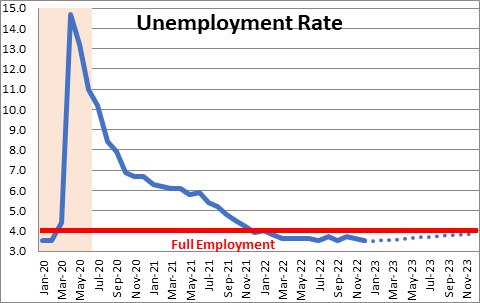 What about inflation?  The overall inflation rate slowed in the second half of last year.  The CPI reached a peak of 9.0% in June as the outbreak of war between Ukraine and Russia caused energy prices to soar.  But as energy prices subsequently declined, the CPI slipped to 6.4%.  That steady drop-off in inflation encouraged market participants that they were on the right track and that inflation might slow faster than the Fed was expecting.  However, the slowdown was caused almost entirely by falling energy prices.  The so-called “core” CPI, which excludes the volatile food and energy categories, peaked at 6.7% in September and ended the year at 5.7%.   Furthermore, in the final three months of the year the core CPI climbed at a modest 3.1% pace which convinced the markets that the Fed tightening earlier in the year was working.  But during that period of time the core CPI got a lot of help from sharp declines in both used car prices and airfares.  For the core rate to continue to slow, these two categories must fall further.  It is not clear that is going to happen. 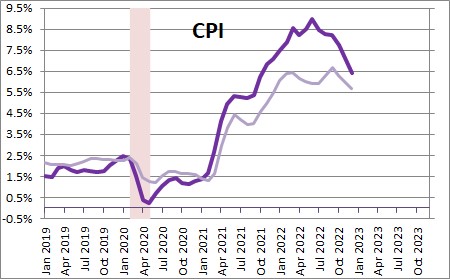 The most disquieting part of the core CPI is the shelter component, which rose 7.5% last year and in the final three months of the year climbed at an even faster pace.  Because rents comprise one-third of the entire CPI index, it is hard to imagine how the overall CPI can fall to 2.0% when one-third of the index is rising at a 7.5% pace.  If home prices continue to fall, rents will eventually slow — but with a lag of roughly one year. 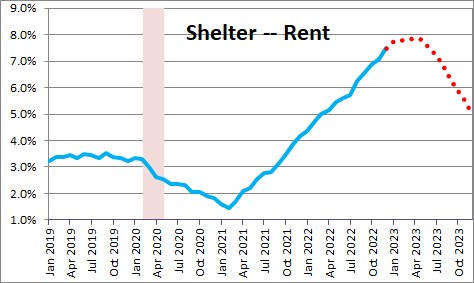 Putting all of this together, we expect the core CPI to rise 4.2% in 2023.  Significant improvement in the core rate will not occur until very late in 2023. 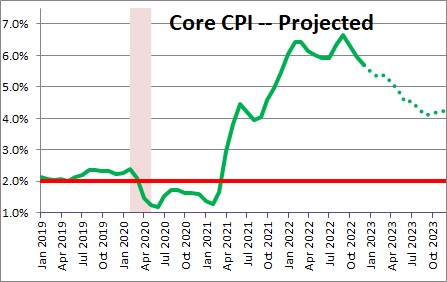 The Fed plans to boost the funds rate to 5.1% in the first few months of this year.  With a higher funds rate it believes GDP growth will slow to 0.5% for the year and the core inflation rate might subside to 3.5%.  But if we are right that core inflation remains stubbornly high at 4.2% Fed officials will be disappointed.  In that case it may raise the funds rate to 6.0% by the spring.  The markets are  not ready for that.