A research piece written by Federal Reserve Board economist Claudia Sahm was highlighted recently in the Wall Street Journal — “Rule Aims to Spot Recessions Earlier”.  It has sent the economics community into a tizzy.  Typically, when the economy slips into recession it takes six months to a year before the National Bureau of Economic Research confirms that the downturn is indeed a recession.  That is not particularly helpful.  By that time the economy is likely approaching the end of the recession or may even have begun to recover.  Ms. Sahm’s rule states that when a 3-month moving average of the unemployment rate is at least 0.5% above its minimum from the previous 12 months, the economy is in a recession.  This simple measure has corrected called every recession since 1970 within two to three months after it actually began.  That sounds impressive.  But the stock market, a number of leading economic indicators, changes in payroll employment, and the Fed can easily sniff out a budding recession long before Ms. Sahm’s rule sends up a red flag, and far in advance of the NBER’s definitive decision.

The chart below shows the results of Ms. Sahm’s research and her assertion is accurate.  The rule consistently confirmed the beginning of a recession within 2-3 months of when it actually began.  For example, the NBER decided that the most recent expansion officially ended in December 2007. Ms. Sahm’s recession indicator rose 0.53% above the low for the preceding 12 month period in February 2008 – just two months after the recession actually began.  The NBER did not make its decision until December 2008 – one year after the fact.  Her model beat the NBER by 10 months. 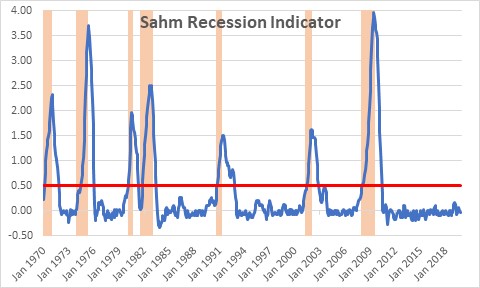 However, a number of leading economic indicators, a coincident indicator (payroll employment), and the stock market clearly signaled early on that a recession was underway.  For example, payroll employment registered back-to-back declines for the first time in July 2007, the S&P 500 stock market index began its slide in October 2007, and the Fed began cutting the funds rate in August 2007.  The economy was becoming unglued and the perception that something bad was in the works came months before the actual beginning of the recession, well before the downturn in Ms. Sahm’s recession indicator, and more than one year before the NBER made it official.  The fact that her indicator was able to make the call long before the NBER’s confirmation is not very impressive.  Any economist can beat the NBER to the punch.

Would we have known with 100% certainty in late 2007 that the economy was in recession?  Of course not.  But as the data began to unfold throughout the fall months of 2007, the odds would have risen dramatically with each passing month.  The first hint of trouble began when employment began to drop in July and August after rising in each of the previous 46 months.  Then the stock market began its slide in October.  While stock prices are a notoriously fickle indicator and frequently give false signals, in conjunction with other economic indicators they can be powerful.  Indeed, the 19 members of the Fed’s Open Market Committee were sufficiently convinced that a recession was in the works that they began to cut rates in August 2007.  Nobody was waiting for the NBER.

The same general timeline occurred in the previous cycle which ended in March 2001.  Ms. Sahm’s recession indicator gave the signal in June 2001.  The NBER did not reach its conclusion until November 2001.  But payroll employment began a series of declines in March 2001.  The stock market reached its peak in late October 2000.  And the Fed began to cut rates in January 2001.

Ms. Sahm’s rule is helpful, but the reality is that we do not need to wait for the sun and the moon to come into alignment before we can be reasonably certain that a downturn is underway.  Look at the stock market which has undoubtedly begun to swoon.  Look for declines in payroll employment, a drop in consumer confidence, a falloff in the ISM index for new orders for manufacturers.  Look for an inverted yield curve.  When a recession hits you will know it long before it becomes official.

While no great surprise, recent  data and the stock market indicate clearly that a recession is nowhere in sight.  Even Ms. Sahm’s unemployment rate indicator confirms that is the case.