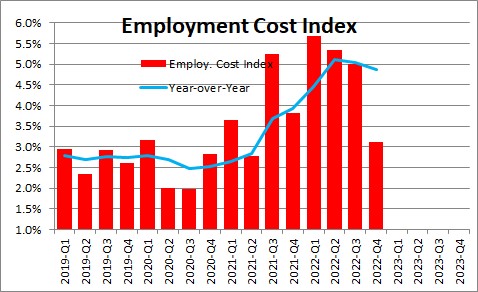 The employment cost index for civilian workers climbed at a 3.1% rate in the fourth quarter after rising at a 5.0% rate in the third quarter   Over the course of the past year it has risen 4.9%.  As always, the increases diverge amongst industries.  The ones where labor costs have risen most rapidly FOR restaurant and hotel workers (6.4%), nursing care 7.0%, sales 6.1%, and retail trade 5.6%

With the unemployment rate currently at 3.5% and full employment presumably about 4.0%, upward pressure on wages and benefits has begun to emerge because of a very tight labor market.  An increasing number of firms of all sorts are boosting  compensation of all types to get enough bodies to boosts production.  This series dates back to 2001 and this is, by far, the most upward pressure on labor costs that we have seen in the past 20 years. 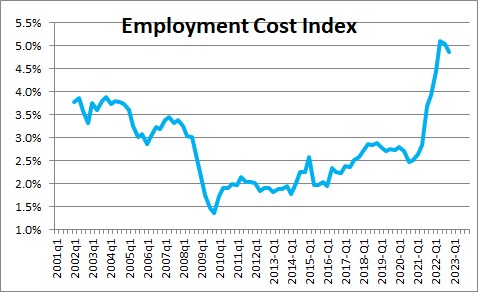 Wages climbed at a  4.2% rate in the fourth quarter after rising at a 5.3% annual rate in the third quarter.  Wages have risen 5.1% in the past year which is the fastest growth rate in 20 years.  This faster rate of increase in wages should continue in the quarters ahead. 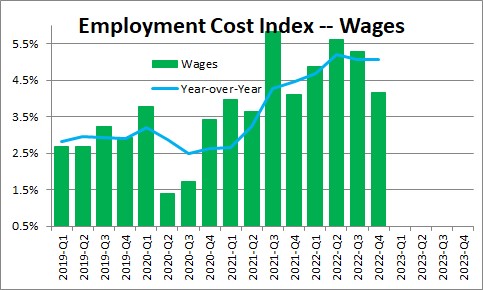 Benefits climbed at 3.4% rate in the fourth quarter after rising at a 3.9% rate in the third quarter.  Over the past year benefits have risen 4.9%. 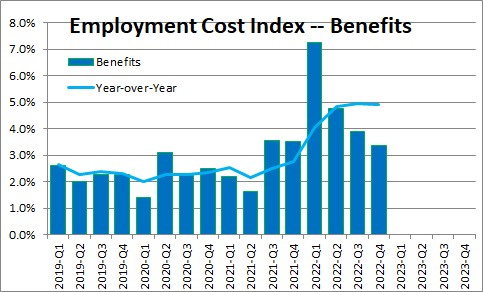 While labor costs have risen 4.9% in the past year and are trending higher, they are still exceeded by inflation.  The BLS reports that real wages have fallen 2.1% in that period of time.  This will cause workers in general, as well as unions, to seek sizable wage gains in the quarters ahead which will, in turn, keep upward pressure on inflation.