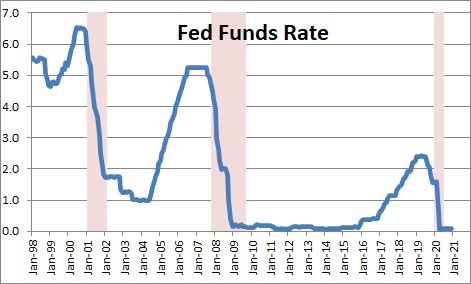 The federal funds rate is the overnight rate that banks charge each other to borrow/lend  reserves.  Some banks have more reserves than they need.  Others (principally large banks) are short of reserves and must borrow from other banks in the system, typically on an overnight basis.  The rate at which this borrowing takes place is known as the fed funds rate.  It is the only rate that the Fed can directly control.  Most other short-term interest rates like Treasury bills, CD’s, commercial paper, etc. are very closely linked to this rate, so when the Fed tightens or eases all other short-term rates move in the same direction by essentially the same amount.

Once the recession began in December 2007 the Fed tried to stimulate the economy and ultimately pushed the funds rate almost to 0%.  It remained at that record low level until December 2015.

In December 2015 the Fed decided it was time to alter its policy and push the funds rate towards a more “neutral” policy stance.  So what might be regarded as a  “neutral” level for the funds rate?  The answer lies in the relationship between the funds rate and the inflation rate.  Whether an interest rate is high or low depends entirely on how it stacks up relative to the rate of inflation.  Think of it this way.  A 10% interest rate most of the time would be regarded as punishingly high.  But in the late 1970’s when the inflation rate was 12%, a 10% rate was actually quite cheap.  An investor could borrow at 10% for a year, buy an asset whose price would rise 12%, then pay back the 10% loan a year later and actually make money on the transaction.  So whether rates are high or low really depends upon their relationship to the rate of inflation. 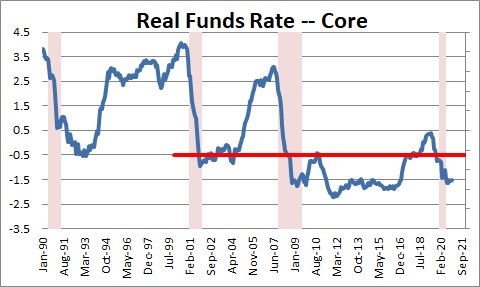 .Why would the real funds rate drop?  Because technology has gradually been gradually lowering the rate of inflation.  Today when we buy anything we shop first on the internet to check prices.  We can find the lowest price for that item not only in our area but throughout the country and we will probably buy it from the lowest cost seller and perhaps get next day delivery and free shipping.  As a result, goods-producing firms in the U.S. today have absolutely no pricing power.  Since 2012 goods prices have declined 0.1% while services have risen 2.7%.  That is quite a difference.  And of all the things that consumers buy 40% are goods.  If  you do the math, then the fact that goods prices have risen 2.8% more slow than services, that has knocked 1.1% off the average inflation rate during the past decade.  Another way of looking at that is, if the Fed still wants a 2.0% inflation rate, then it needs lower rates to make that happen.  So perhaps a -0.5% real rate is the new “neutral” funds rate. 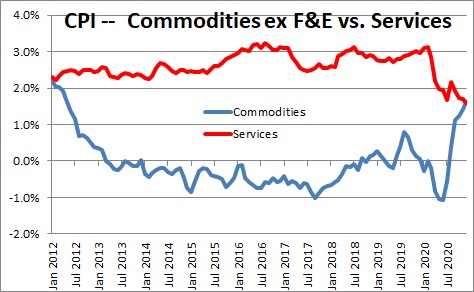