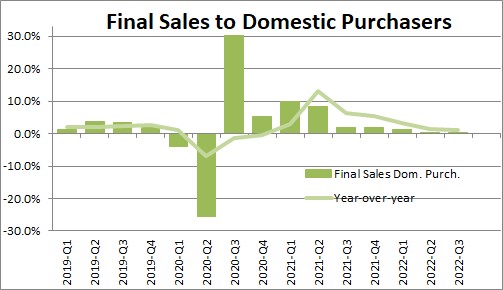 It is important to remember that final sales is a measure of how many domestically produced goods are sold each quarter.  But we also sell goods overseas — our exports.   And we purchase goods from other countries — our imports.

In the never-ending process of analyzing the GDP data, there is yet another series called “final sales to domestic purchasers” which measures how much U.S. residents are actually spending.  It starts with final sales, but then subtracts exports (which represents how much foreigners are buying from the U.S.) and adds imports (which represents how much U.S. residents are spending on imports).  The end result is a measure of sales by domestic purchasers.

Final sales to domestic purchasers which excludes both the change in inventories and trade rose 0.9% in the third quarter after having climbed 0.2% in the second quarter.  Given that final sales rose 4.0% in the second quarter while final sales to domestic  purchasers rose 0.9%, then trade added 3.1% to GDP growth in the third quarter.as the deficit for net exports narrowed with exports surging by 15.3% and imports declining by 7.3%