There can be little doubt that expectations about President Trump’s proposed policy changes are influencing individual and business attitudes.  It is evident in the stock market which remains close to a record high level.  It can be seen in measures of consumer confidence and indicators of business confidence.  But are rising expectations based solely on hoped for policy changes?  We do not think so.  Our sense is that the economy will experience slightly faster GDP growth this year even if none of President Trump’s policy changes are enacted.  Our hope is that many of his policy changes will be adopted (to some degree) which will further stimulate near-term GDP growth and, simultaneously, boost the economy’s long-run potential growth rate from 1.8% today to 2.8% by the end of the decade.

Rising investor expectations can be seen in the stock market which is within 2.0% of its record high level. 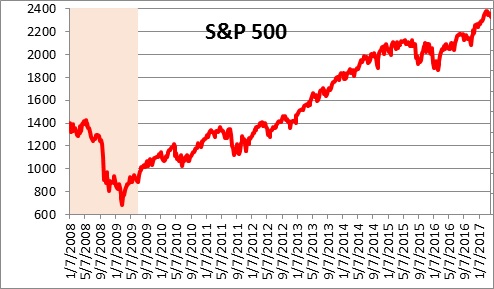 Consumer confidence measures are at their highest levels thus far in the business cycle. 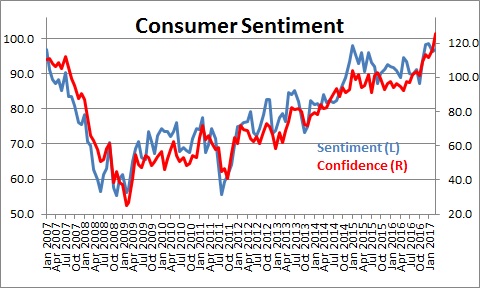 There was no discernable different between the two groups with respect to current conditions.  Indeed, the current conditions component at 115.2 is at its highest level since 2000 and partisanship had no particular impact with little difference between Republicans and Democrats.

As evidenced by the rise in the overall expectations index, the majority of consumers have a sense that President Trump will produce meaningful cuts in individual and corporate income tax rates, regulatory relief for businesses, and some repatriation of corporate earnings.  That will, presumably, boost GDP growth for both 2017 and the years beyond.  But because a significant number of consumers do not share that enthusiasm, it will be difficult to envision a significant upswing in consumer spending and GDP growth until these divergent views converge.  Given the apparent lack of progress on policy issues in Washington It seems likely that this gap will remain wide for months to come.

Businesses in America are equally upbeat.  For example, the Institute for Supply Management’s report on business conditions indicates that corporate sentiment amongst manufacturing firms has climbed to its highest level in two years and is within a couple of points of being the highest level in a decade.  Sentiment amongst non-manufacturing firms has climbed appreciably.  Small business confidence has already surged to its highest level since 2004. 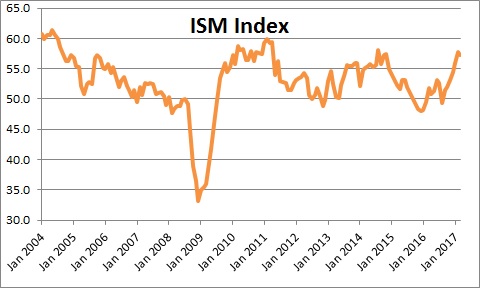 One might be tempted to dismiss the stock market gains since the election and these big increases in consumer and business confidence as merely indicators of hoped for policy changes and if President Trump cannot pass legislation to implement them the economy will weaken noticeably.

Firms are seeing significant increases in their order books.  Orders do not rise solely based on expectations. 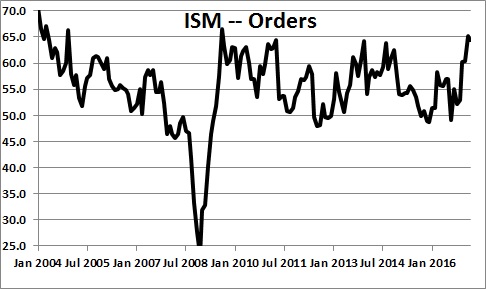 These firms indicate they are boosting employment to presumably help them increase production to satisfy the demand associated with the additional orders.  Employment does not rise based solely on expectations. 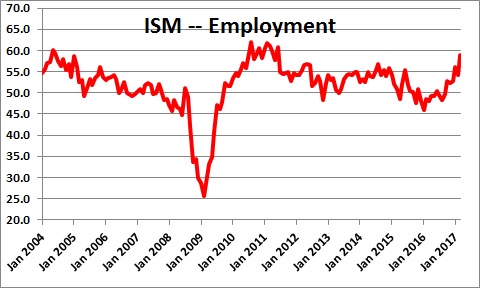 Furthermore, since the election numerous companies have announced an intent to boost hiring in the U.S., shift overseas production back to the United States, and/or boost investment.  The list is long and includes such firms as Amazon, Walmart, General Motors, Ford, Hyundai, Sprint, Pizza Hut, Bayer, and even the Chinese retail giant Alibaba.  While the exact magnitude and timing of the additional hiring and investment remains uncertain, the reality is that something fundamental has changed since the election which will boost GDP growth completely apart from a mere hope that Trump’s policy changes will bring about change.

Meanwhile, prices are on the rise.  In late 2014 and 2015 falling prices, particularly in the oil sector, led to a sharp contraction in both current spending and investment in that sector.  But oil prices have rebounded.  Drillers are re-opening previously shuttered oil rigs.  The drag on GDP growth from the oil sector has ended and it is now providing a moderate amount of stimulus for the economy. 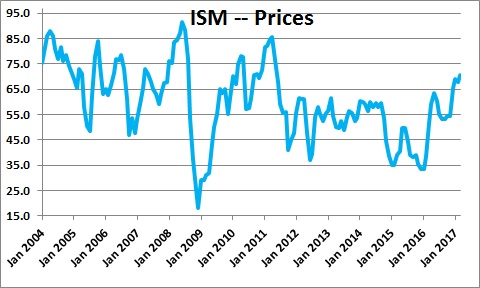 GDP growth in 2016 was 2.0%.  Even without policy changes from President Trump and Congress, we would expect GDP growth for 2017 to edge upwards to 2.2% given the factors cited above.  If some of the hoped for policy changes can be enacted (even a watered down version), GDP growth this year should accelerate further to 2.4%.  But the most significant impact will probably be on GDP growth in the years ahead.

Trump’s policy changes will significantly stimulate investment spending which will, in turn, boost productivity growth which has slipped in recent years to about 0%.  Because productivity growth is one of the determinants of the economy’s “potential” growth rate, faster growth in productivity should boost our economic speed limit from 1.8% or so today to 2.8% by the end of the decade.

The bottom line is that the economy is gathering some momentum with or without help from President Trump.