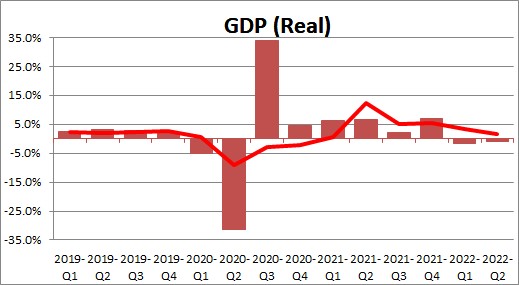 The revised estimate of second quarter GDP is -0.6% compared to the preliminary estimate of .-0.9%.  GDP declined 1.6% in the first quarter after having expanded at a steamy 6.9% pace in the fourth quarter.  Many people believe that two consecutive declines in GDP is a recession.  While that is a general rule, the reality is that a recession as defined by the National Bureau of Economic Analysis which has the final say of when recessions begin and end requires falling employment and declining industrial production.  We have neither.  So when the dust settles we believe that this will not go down into the history books as a recession.  Nevertheless, the consecutive declines in the first and second quarters will generate considerable yes/no discussion.  Whether the economy is in a recession or not, the important point is what is going to happen to inflation in the months and quarters ahead, and how high the Fed will have to boost rates to bring inflation back down to the 2.0% mark. 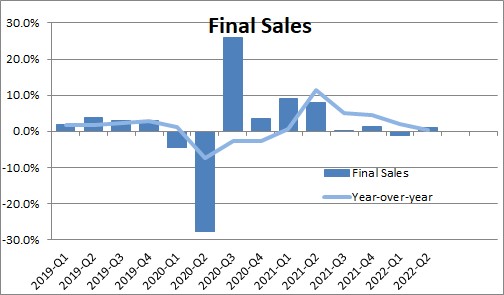 Final sales to domestic purchasers which excludes both the change in inventories and trade fell 0.2% in the second quarter after having risen 2.0% in the first quarter.  Given that final sales rose 1.3% in the second quarter while final sales to domestic  purchasers fell 0.2%, then trade added 1.5% to GDP growth in the first quarter.as the deficit for net exports narrowed with exports surging by 17.6% and imports climbing by 2.8%. 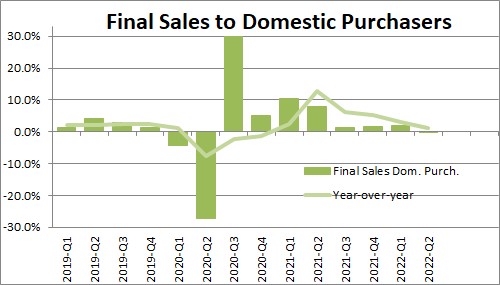 Consumption spending rose 1.5% in the second quarter (previously an increase of 1.0%) after growing by 1.8% in the first quarter and climbing 2.5% in the fourth quarter.  Consumers continue to spend at a moderate pace despite higher interest rates and surging inflation.  Spending on goods declined 2.4% in the first quarter.  Spending on services climbed by a 3.6% as noteworthy gains were reported in numerous categories — housing and utilities, health care,  restaurant dining, recreation and financial services.  With service sector spending continuing to climb more rapidly than goods purchases, it is clear that supply constraints are curtailing the pace of economic activity in the economy across a wide spectrum of goods. 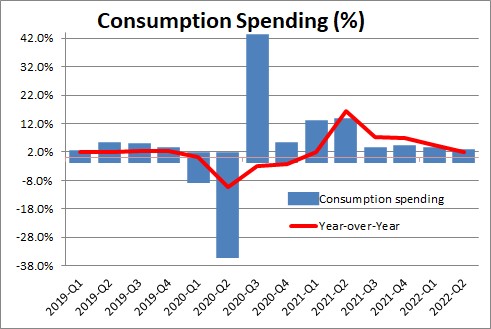 Nonresidential investment was unchanged in the second quarter after rising at a steamy 10.0% pace in the first quarter and climbing 2.9% in the fourth quarter. Spending on structures declined 13.2%.  Equipment spending fell 2.7%.   In today’s world firms need to invest in technology that will allow them to survive difficult times, and/or help them expand their production and delivery functions to meet surging demand.  Intellectual property climbed 10.0% in the second quarter after rising 11.2% in the first quarter and 8.9% in the fourth quarter  In the past four quarters spending on intellectual property has risen 9.8%.  We suspect that, as  noted earlier, supply constraints will gradually diminish, intellectual property should continue to climb rapidly, and nonresidential investment will continue at a reasonably rapid pace of growth.. 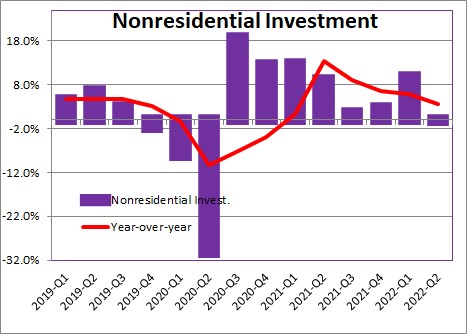 Residential investment plunged 16.2% in the second quarter after rising 0.4% in the first quarter and climbing 2.2% in the fourth quarter.  Housing is taking the brunt thus far of higher mortgage rates and soaring home prices.  But yet, the demand for housing remains relatively strong as evidenced by the fact that the average home stays on the market for just 16 days — the shortest length of time between listing and sale ever.  However, mortgage rates have fallen somewhat to 5.2% after hitting 5.8% in July.  And home prices appear to be leveling off quickly after climbing by 20% previously.  That suggests that residential investment spending should level off in the months ahead. 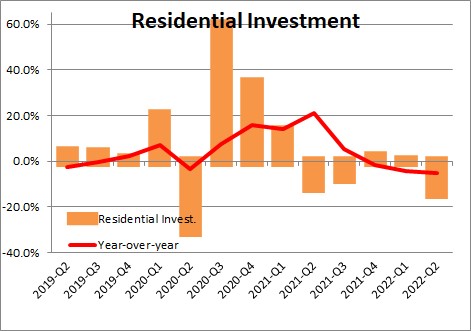 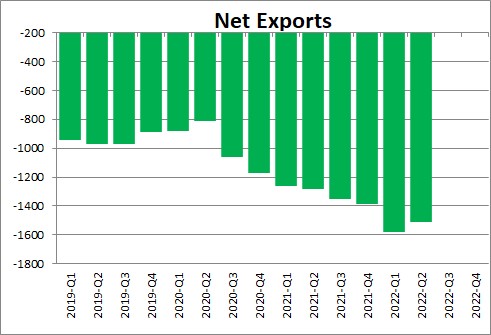 After having declined in the first two quarters of the year we expect GDP to expand at a slow but positive pace of about 2.9% in the final two quarters of the year.  The economy keeps cranking out jobs and wages keep rising which will boost consumer income and spending.  Real interest rates remain negative so they will continue to boost the economy, and supply constraints will gradually disappear.  The economy will continue to chug along at a moderate pace until such time as the Fed boosts the funds rate above the inflation rate.