GDP Growth in Europe and Asia – Stronger Than You Think

The news from Europe today is focused on continuing lockdowns in France, Germany, Italy, and Spain as a renewed wave of COVID inflections spreads across the continent.  The prospects for Asia are being held in check by the so-called Asian Five countries of Indonesia, Malaysia, Philippines, Thailand and Vietnam which not only depend to a large degree on the still murky outlook for tourism, but also appear to be last in line to receive the available vaccines.  As a result, it is easy to become pessimistic about 2021 GDP growth prospects for Europe and Asia.  But make no mistake, particularly robust GDP gains in the United States, China, and India will propel growth in virtually every country around the globe.

The IMF provides global economic projections twice a year in October and April.  The highlight seems to be on the change in the IMF’s forecasts relative to its prior projection.  That is certainly part of the story.  But the focus should also be on the projected growth rate for that particular country or region.  The IMF is projecting solid 6.0% world GDP growth for 2021 which is 0.8% faster than it thought back in October.  It would also be the fastest pace of GDP expansion since 1976.

That 6.0% pace of global growth is being fueled by an expected 6.4% GDP growth rate in the United States and 8.4% in China.  The projected boom in the world’s two largest economics will power the demand for exports throughout the world – Europe, developing Asia, and Latin America in particular.  But, despite the somewhat slower growth forecast the likely 4.4% rate of GDP expansion in the Euro area, and 4.9% growth is the ASEAN -5 remains robust.  The downward revision to growth forecasts for these two areas seems to be attributable to the combination of second and third waves of the corona virus and the possibility of extended quarantines (primarily Europe), the prospect that widespread vaccine distribution will not be available until 2022 (largely the ASEAN-5), and anemic fiscal policy support in most countries (in contrast to the strong fiscal response in the U.S., Japan, and the U.K. 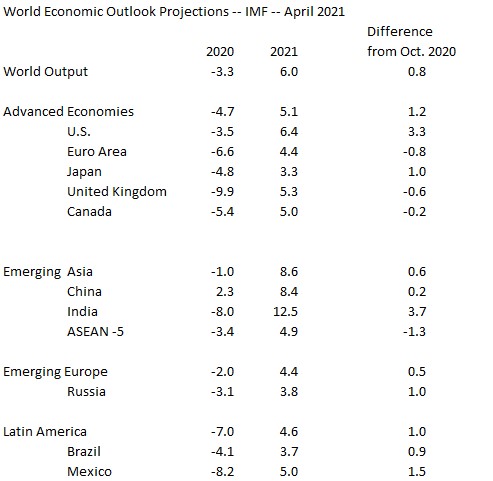 With the possible exceptions of the U.S., China, and India the recovery from the global recession that occurred in March and April of last year will remain incomplete at the end of this year, which means that the 2021 growth rates in most areas of the world will be less than the magnitude of last year’s GDP drop.  That leaves considerable room for further expansion in 2022 which the IMF currently pegs at 4.4%.

While fiscal stimulus can re-invigorate growth in a hurry, its impact will be temporary.  At some point, the fiscal stimulus must cease and growth will return to an anemic pace until such time as a vaccine becomes available.  That is the piece that will bolster confidence, encourage consumers to spend, provide incentives to business leaders to hire, lower unemployment rates, and produce a self-sustaining rate of expansion.  It makes sense that the countries that have developed these vaccines will make them available to their own citizens first.  But once herd immunity has been established, they will make those vaccines available to less developed nations.  At the same time, any current production and distribution delays will almost certainly be overcome quickly.  Finally, there are new vaccines in the pipeline that will expedite the effort to inoculate the rest of the world.  Do not be misled by negative headlines about the spread of COVID and vaccine delays.  Help is on the way.  The situation will look much different globally by midyear.

Investors are looking beyond the renewed outbreaks of COVID, slow vaccination distribution, and possibility of renewed shutdowns to the likelihood of a robust economic expansion in the rest of 2021, 2022, and continuing on into 2023.  The combination of robust GDP growth, rising but still low inflation, and virtually no chance of central bank tightening through the end of 2023 is about as positive a scenario for stock markets everywhere as one can imagine.

The S&P 500 stock index has been surging and setting a new record high level very few days.  But the MSCI All World Index ex U.S. has been climbing at an equally impressive pace with dramatic gains in the Euro Stoxx 50, the Nikkei 225, and emerging markets. 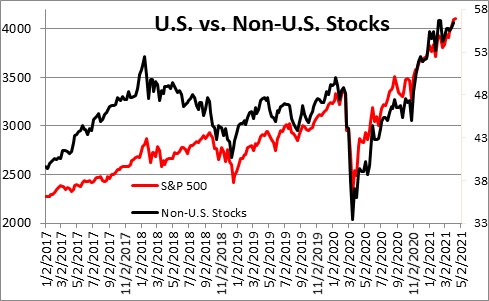 The world is well on its way to recovery and investors have noticed.  Enjoy the ride.