We do not talk about growth outside the U.S. too much because the trade sector is such a small piece of the GDP pie.  Typically, developments in Europe and Asia have only a minor impact on U.S. GDP growth and inflation.  But that is not the case currently.  At the end of July the IMF revised global growth downwards by 0.4% in 2022 to 3.2%, and slashed GDP growth by 0.7% in 2023 to 2.9%.  These revisions may not seem large, but they are huge given that they represent changes to the outlook it presented in April — just three months earlier.  The global economy was shaky as the year began.  It has since been hit by higher-than-expected inflation around the globe, sharp increases in interest rates initiated by the Federal Reserve but being matched elsewhere, new outbreaks of COVID in China and the associated lockdowns combined with a significant deterioration of the real estate market.

In Europe the problems to a large extent reflect negative spillover in various forms from the war in Ukraine.  According to the U.N. more than 9 million refugees from Ukraine have crossed borders into neighboring countries – primarily Poland, Hungary, and Romania.  Those countries are struggling to provide safety, food and shelter to millions of immigrants.

Food and energy prices have skyrocketed in Europe.  When the war began crude oil prices surged as Europe feared Russia would halt the flow of oil.  Crude prices have since retreated from their peak with the prospect of increased supply from OPEC countries, but they still remain 30% higher than they were a year ago. 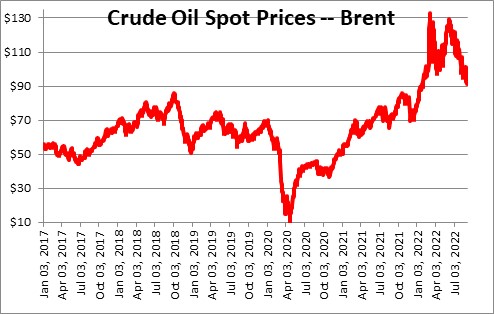 In recent days Russia has cut the flow of natural gas imported to Europe through the Nord Stream 1 pipeline which has caused natural gas prices to soar and has set off alarms about whether Europe can find enough alternative sources of gas to counter the loss from Russia. 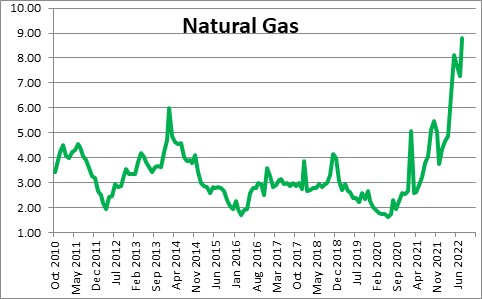 Food prices in Europe (and around the world) have skyrocketed because Ukraine was a major supplier of corn and wheat.

Sharply higher food and energy prices combined with supply/demand imbalances have boosted inflation in the Euro area to 8.6%, its highest since the inception of the monetary union.  The European Central Bank has countered with higher interest rates, last week boosting its benchmark rates by 0.75% with promises of still higher interest rates ahead.

Against this the IMF has reduced growth in Europe by a relatively small 0.2% to 2.6% in 2022.  But it anticipates a much more worrisome 1.1% downward revision to growth in 2023 to an anemic 1.2% pace.  The bulk of the negative impact this year is being experienced in Germany, France, and Spain partially countered by a somewhat brighter outlook for Italy which is experiencing an impressive renewal of tourism.  But the impact of higher inflation and higher interest rates will take a toll across-the-board in 2023.

Meanwhile China is experiencing renewed outbreaks of COVID in several large cities resulting in additional lockdowns.  The problems started in Shanghai, a major global supply chain hub, in April which entered a strict lockdown.  Then came Wuhan.  In recent days outbreaks in a number of other large cities has put millions of people under renewed lockdown as the government persists with its hardline policy to contain the virus.  And now the country is experiencing a worsening crisis in China’s beleaguered real estate market.  Hundreds of thousands of homebuyers in dozens of cities have stopped payment on mortgages for pre-sold properties which are not yet complete.  The pre-payment of mortgages is a common practice in China.  The developers then take the money and use it for other purposes, such as buying land to build still more structures.   As the mortgage boycott spreads it is creating liquidity challenges for highly leveraged developers and hampering future sales.

As the result of COVID and mortgage-market challenges the IMF has reduced growth in China by 1.1% in 2022 to 3.3% and by 0.5% in 2023 to 4.6%.  By historical standards these are extremely anemic growth forecasts for China if they are accurate. 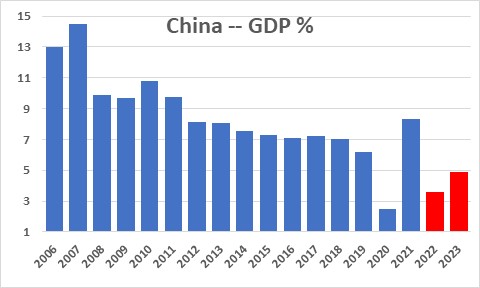 As these various growth challenges around the globe have materialized, investors have sought safety in dollar-denominated U.S. investments.  The dollar’s rise began mid-2021 but has gathered momentum since the end of last year as the Fed made it clear it was going to raise rates aggressively to reverse the direction of inflation and return it to its 2.0% target rate.  Typically changes in the dollar are less dramatic and, because the trade sector represents only 10% of the GDP pie, they cause only minor fluctuations in the pace of economic activity and inflation in the U.S.  But recent behavior is suggesting that the non-U.S. events described above could have a noticeable impact on growth and inflation later this year and 2023. 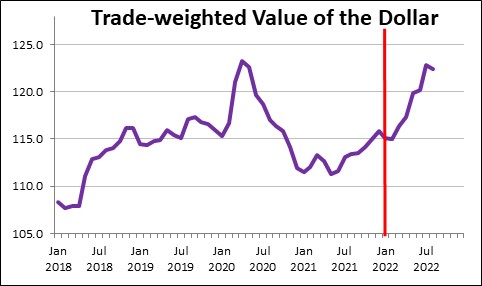 In the past year the dollar has risen 8.0%.  Given that trade is 10% of GDP, the run-up in the dollar could reduce GDP growth by 0.8% or so because U.S. goods are now more expensive for foreign purchasers which will result in reduced growth in exports.  That is helping the Fed do its job by slowing the pace of economic activity.  Previously we thought U.S. GDP growth next year would be about 2.0%.  But now, given the expectation of slower growth outside U.S. borders we have lowered that forecast to 1.5%.  That is somewhat below the economy’s estimated 1.8% potential growth rate, but that is unlikely to be slow enough to bring inflation back to the 2.0% mark any time soon.

The rising value of the dollar will also help the Fed to reduce inflation by lowering the prices of imported goods.  Accordingly we have lowered our core CPI forecast for 2023 from 5.2% to 4.4%.  Slower GDP growth and reduced prices of imported goods should help.  But even so, at 4.4% it is still more than double the Fed’s 2.0% desired pace. 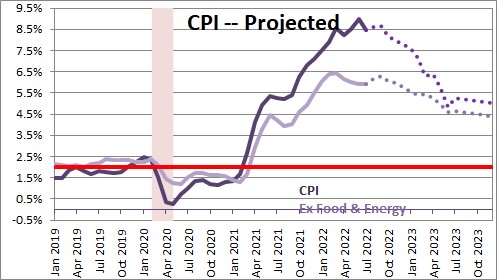 We have often mentioned that even with aggressive Fed tightening the real funds rate would remain negative through the end of 2023 because inflation would remain high.  However, if weaker growth overseas can both slow U.S. GDP growth and moderate inflation, the real rate at the end of 2023 will be +0.6% — a 5.0% funds rate less a 4.4% increase in the core CPI.  With a positive real funds rate of that magnitude the Fed will finally have a chance to slow GDP growth enough to have a meaningful reduction in the inflation rate.  We expect the Fed to boost the funds rate by 0.75% at its meeting on September 20-21 to 3.0-3.5%. with a couple of smaller rate hikes later in the year to lift the funds rate to the 4.0% mark by yearend, and then additional increases in 2023 to bring the funds rate to 5.0% by the end of that year. 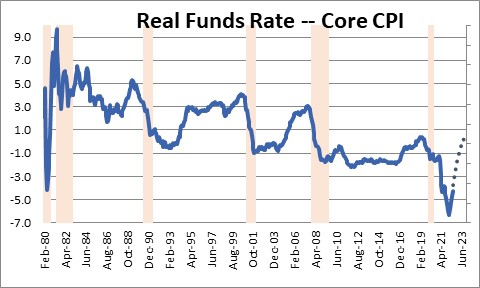