Government Spending – Out of Control?

Every year the Congressional Budget Office updates its forecasts of the budget deficit and Treasury debt outstanding for the upcoming 10-year period.  It’s projected deficit for 2021 is $2.3 trillion (10.3% of GDP) which would be the second largest deficit since 1945, surpassed only by the $3.2 trillion (14.9% of GDP) shortfall last year.  The economic disruption caused by the pandemic and the associated legislation enacted to get the economy back on track have caused the budget deficit to explode.  But this budget forecast will get blown out of the water once the proposed $1.9 trillion fiscal stimulus plan is passed.  The current CBO outlook is discouraging.  The revised forecast will be worse. 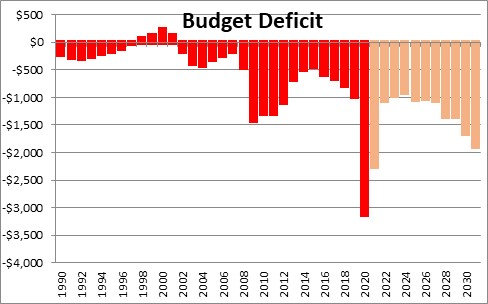 The best way to examine budget deficits is as a percent of GDP which views the deficit in relation to our ability to pay it back.  Economists regard a budget deficit that is about 3.0% of GDP as being sustainable over time because that is what it has averaged over the past 50 years.  But during the next 10 years the deficits will average 4.3% of GDP. 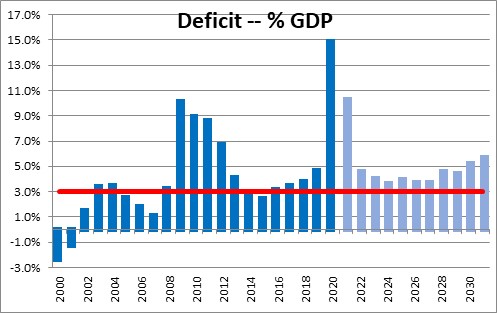 What is causing the budget deficit to explode?

Over the next 10 years tax revenues will average 17.5% which matches the 17.5% average over the past 50 years.  The deficit explosion is not caused by any projected shortfall of tax revenue. 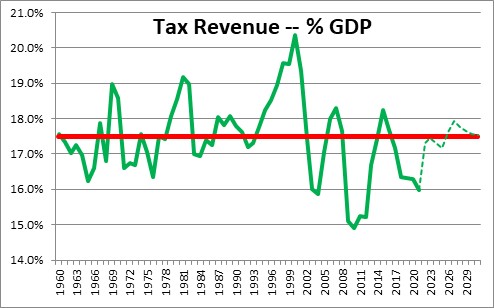 Government spending will average 21.9% of GDP compared to its 50-year average of 20.5%.  The problem is clearly on the expenditures side of the equation. 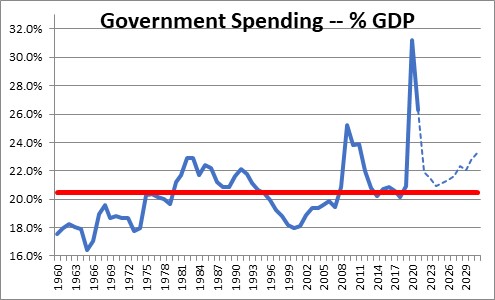 While these forecasts are bad enough, they are essentially useless.  They will become irrelevant once the President and Congress pass another $1.9 trillion fiscal stimulus package this spring.  In that event, government spending will be far higher than shown in the chart above, and the budget deficit will almost certainly surpass last year’s record-busting $3.2 trillion.

The budget explosion in 2020 caused Treasury debt outstanding to climb to 100% of GDP.  It is officially projected to increase only slightly this year, but once the $1.9 trillion fiscal stimulus package is approved, the debt ratio will easily reach a record-shattering 110%.  The prior high was 106% in 1945. 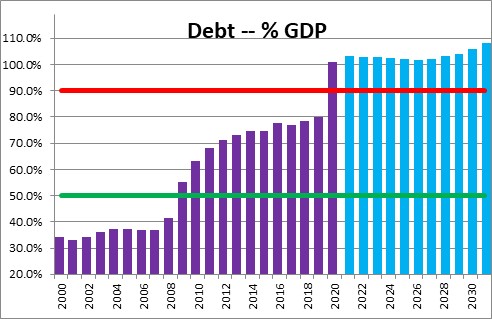 The budget deficits and debt as a percent of GDP projected by the CBO over the next 10 years are bad enough and additional fiscal stimulus will make the situation worse.  But the really serious problems come down the road.  If one uses a 30-year time horizon to 2051, the CBO currently projects the debt to GDP ratio will climb to an eye-popping 200%.  If spending increases, as expected, so does this ratio. 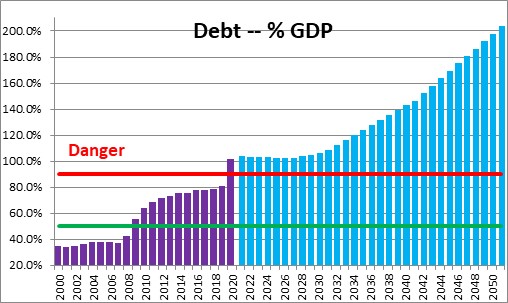 Why this steady explosion in the magnitude of the budget deficits?  Easy.  We have an aging population.  The baby boomers are getting older.  Each year more and more boomers choose to retire and begin to draw Social Security benefits.  They become eligible for Medicare. 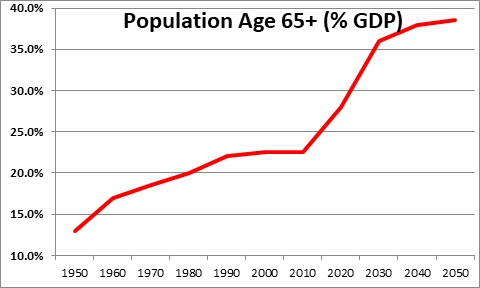 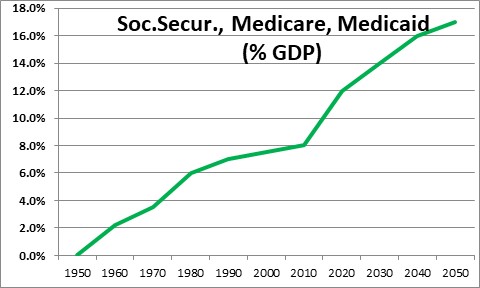 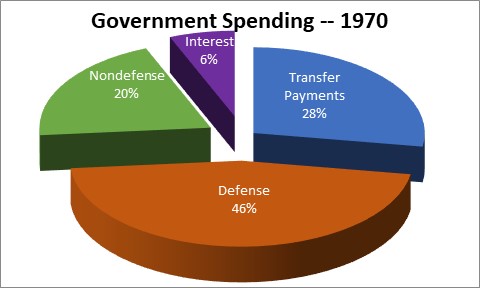 In 2020 defense spending slipped to 11% of all government expenditures while entitlement spending climbed to 70%.  Seven out of every ten dollars our government spends is used to subsidize the income of someone. 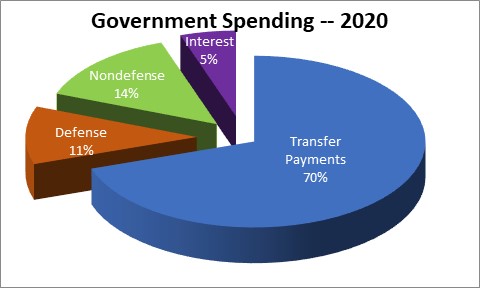 If one believes that U.S. government spending is spiraling out of control and wants to do something about it, the reality is that no meaningful reduction can occur without tackling the big gorillas – Social Security, Medicare, and Medicaid.  And no politician seems willing to go there.  To them, reducing any of those benefits is like touching the third rail.  Do so and your political career will end at the next election.

While we are concerned about the magnitude of future government spending, budget deficits and debt outstanding, the reality is that government spending and deficits are poised to increase for years to come.  The exact details of the proposed $1.9 trillion fiscal stimulus package have yet to be determined, but something will get passed during the next couple of months.  And that will presumably be followed by some sort of an infrastructure spending initiative in the summer.  And then there is the possibility of budget busting programs like a Green New Deal, a $15 minimum wage, free college education, student loan forgiveness, Medicare for all, and a big middle-class tax cut.  The CBO’s budget forecasts outlined above do not incorporate spending for any of these programs.

How will this end?  The economy seems poised for about 7.0% GDP growth this year aa the virus comes under control and consumer spending makes up for lost time.  The soon-to-be-enacted $1.9 trillion spending package will provide further stimulus.  The economy will approach full employment early next year.  Inflation should climb to about 2.5% this year and 3.0% in 2021.  It could rise even more rapidly if any of these additional programs are implemented.  The Fed is willing to accept inflation somewhat above its 2.0% target for a while, but how far above target and for how long before it decides to raise rates?  Does it drag its feet too long? 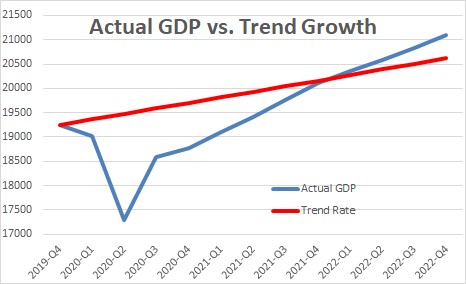 We do not know the answer to these questions, but we are concerned that none of our policy makers in Washington from President Biden, to Congress, to the Federal Reserve are paying any attention to budget deficits and debt.  They should.  Our kids will bear the burden if they make a policy mistake.

For now, enjoy the growth, the steady decline in the unemployment rate, and the stock market ride.  But beware of an increase in inflation which could force the Fed into tightening mode sooner than it expects.