Hang on to Your Hats

At 6.4%, GDP growth in the first quarter was about in line with expectations.  But three things were not anticipated.  First, the demand side of the economy was turbocharged.  Essentially, the government primed the pump with two rounds of checks to consumers in that quarter, $600 checks in January followed by a second round of $1,400 checks in March.  Armed with plenty of ammo consumers came flying out of their COVID-induced coma and boosted spending by 10.7%.  Second, manufacturers could not keep pace.  They were dealing with supply side constraints – labor shortages as well as a series of snow and ice storms in February that paralyzed the eastern half of the country.  As a result, they dipped into inventories by an eye-popping $85 billion in an attempt to satisfy the surging demand. Those inventory levels will need to be rebuilt, which means that GDP growth in subsequent quarters will get a significant boost.  Third, growth in the quarter ended on a high note as the latest round of stimulus checks boosted income far more than spending which means that the savings rate surged to 27.8%, far higher its average 7.0% level over the past ten years.  That gives consumers a war chest of roughly $4.5 trillion of excess savings to spend in the months ahead.  As a result, we have boosted our projected second quarter GDP growth rate to 11.0% and anticipate growth for the year at a steamy 8.0% pace.  The production side of the economy needs to find a lot of workers in a hurry.  We hope that begins in April with a projected increase in payroll employment of one million workers.

It is hard to understate exactly how much momentum the economy has at the moment.  We saw GDP growth in the first quarter of 6.4% which was a solid pace but widely expected.  But the demand side was on steroids as evidenced by a 9.2% runup in final sales (GDP less the change in business inventories).  First quarter final sales growth has been surpassed in history only by the 25.9% gain in the third quarter of last year which, of course, followed the record-breaking drop in second quarter growth as the quarantine stopped the economy dead in its tracks.  A 9.2% increase in final sales at this stage is truly impressive. 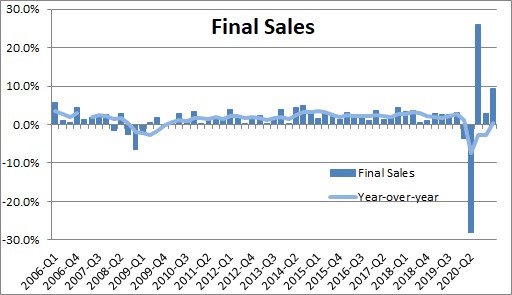 Consumer spending led the charge with a 10.7% increase (which is a big deal because such spending accounts for 70% of GDP).  But nonresidential investment spending was right behind with a 9.9% gain led by growth in the equipment spending and intellectual property categories.  Residential spending chipped in with a 10.8% run-up.  Thus that 9.2% increase in final sales was spread evenly across all major categories.

Manufacturers simply could not keep up with the torrid pace of spending and, as a result, business inventories declined by a whopping $85 billion in the first quarter.  Firms will need to restock the level of their inventories in the months ahead so as not to miss out on additional sales.  They will respond by hiring new workers and trying to significantly boost the pace of production.  As this occurs GDP growth in the next several quarters will get a significantly lift from re-shelving inventories. 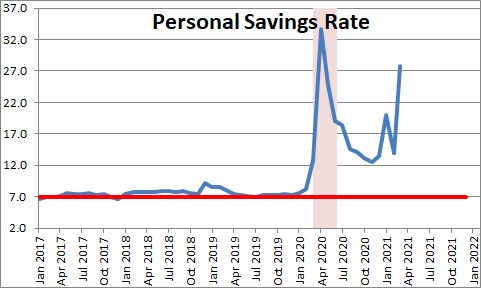 To fully understand what that high savings rate means, consider the following.  With the savings rate at 27.8% consumers have $6.0 trillion of savings.  If the savings rate were more normal at 7.0% there would be $1.5 trillion of savings.  Thus, consumers today have $4.5 trillion more savings than they typically hold.  What are they going to do with it?  Some of it may find its way into the stock market.  But the bulk is going to get spent as consumers decide it is once again safe to go to restaurants and bars, get on an airplane, stay at a hotel, or go to a sporting event or music festival.  Just to put that $4.5 trillion in context, in 2019 when consumer spending grew 4.7% the dollar increase that year was $0.7 trillion.  So, as we see it, consumers have enough ammo already to finance a reasonable pace of consumer spending for the next six years.  Alternatively, they could go on a summertime spending spree which could easily cause 2021 GDP growth to surge into the 10.0-15.0% range. 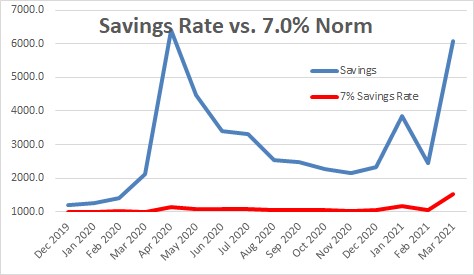 With a rapid pace of consumer spending for months to come (or perhaps a frenzied pace for a much shorter time period), it certainly seems like inflation is headed higher.  It is hard to imagine how business leaders can find enough workers to quickly ramp up the pace of production and, at the same time, restore their supply chains to eliminate the existing shortages of needed materials.  When demand exceeds supply, prices head higher.

In short, hang onto your hats.  The economy is off to the races.