Hang onto Your Hat – It Could Be a Wild Month

With the president and some of his aides having contracted the corona virus, the number of balls in the air has increased.  How sick will he get?  Will he be able to continue campaigning?  Could this change the outcome of the election in November?  Apart from events at the White House, is the corona virus spreading more rapidly now than it was a month ago?  Also, the House passed a $2.2 trillion fiscal stimulus bill.  Will the economy get another cash injection in the weeks ahead?  One thing seems clear to us.  The economy continues to recover at brisk pace.  Having said that, these other issues are certain to make for some disquieting headlines and likely volatility between now November 3.

What is important to us is that the economy continues to crank out about one million jobs per month and it is showing few signs of slowing down.  With one million jobs created each month the unemployment rate has been falling faster than almost anybody expected.  A number of companies have announced layoffs in coming months.  These layoffs will slow the pace of job creation in the months ahead, but will not stop it.  We continue to believe the unemployment rate will slide from its current level of 7.9% to 6.7% by December.  If that happens, GDP growth in the third quarter should be about 28.0% followed by 7.0% growth in the fourth quarter.

Our operating political assumption is that in the months ahead we will end up with divided government and nothing much will be accomplished.  If Trump wins, he will continue to do battle with the Democrat controlled House (or perhaps the House and the Senate if the Republicans lose their majority in that body).   If Biden wins but Republicans maintain control of the Senate, once again nothing much will be accomplished.  If Biden wins and the Democrats regain control of the Senate, then we may have to re-think our economic forecast.  The prospect of higher taxes will not sit well with the stock market.  But let’s wait and see what happens.  For now, the outcome of the election is not playing a role in our expectation of relatively rapid 5.4% GDP growth next year.

What about the virus?  The number of new cases has apparently picked up since early September when kids returned to school.  But testing has also increased which guarantees that the number of new cases will climb.  What is important is the percent of those tests that come back positive.  If that is rising, then the virus is beginning to spread more rapidly.  But that has not happened.  It continues to hang at about the 5.0% mark where it has been for the past month.  The virus is still around and making people sick, but it is not getting worse which is what the news media has been suggesting. 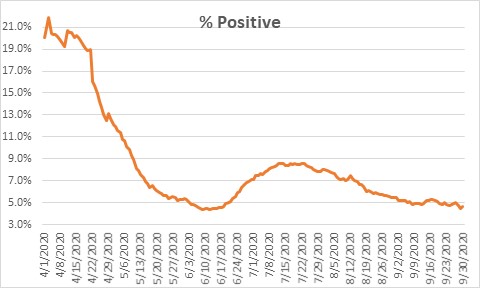 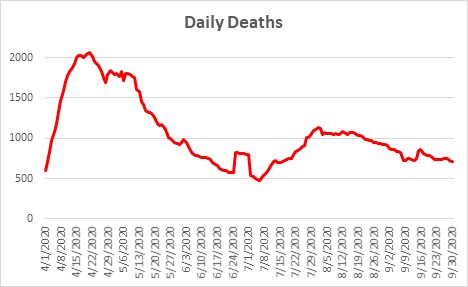 The House has now passed a $2.2 trillion fiscal stimulus package which obviously increases the odds that such a package might actually occur between now and the election.  We hope that the Senate squashes that notion.  We continue to believe that additional fiscal stimulus is unwarranted.  The economy is already recovering at the fastest rate in its history as evidenced by an expected 28% GDP growth rate in the third quarter.  Adding more fuel to the fire will not help.  All it will do is further balloon the yawning budget gap for fiscal 2021.  While currently expected to be $1.8 trillion, such a spending package in 2021 would boost the budget deficit for that year to the $4.0 trillion mark — even worse than the $3.3 trillion deficit registered in the fiscal year that just ended.  If the economy really needed help, that is one thing.  But it does not.  Jobs are being created at a vigorous rate.  The unemployment rate is falling quickly.  Consumers continue to spend rapidly.  The housing sector is on fire.  That is not an economy that needs $2.2 trillion of additional government spending.

We will soon get this election behind us.  Once that happens, we can begin to seriously focus on ways to eradicate the corona virus.  Simultaneously we can find ways to get those people still out of a job back to work.  The best way to do that would be by getting those states that have been slow to re-open their economies moving in that direction.  The two states slowest to re-open have been California and New York which, perhaps not surprisingly, had unemployment rates in August of 11.4% and 12.5%, respectively with 3.3 million unemployed workers between them.  Getting them moving in the right direction could quickly lower the unemployment to 5.5-6.0%.  The best way to help those workers who remain unemployed – high income, low income, white, black, or Latino – is to open up those state economies.  Further government spending is not the answer.