For the first time in a long while bond market participants are concerned about inflation rising as the result of a combination of factors.  The economy already has a head of steam with about 8.0% GDP growth expected in the first quarter.  The government is poised to add more fuel to the fire via another round of fiscal stimulus.  The end of the pandemic is in sight.  And the money supply is growing at a breakneck 26% pace.  Thus, the fear of inflation has already begun to rise.  How long until actual inflation begins to climb?  If inflation accelerates, what will happen to bond yields?

Earlier this month we learned that retail sales surprisingly rose 5.3% in January.  Economists re-did their calculations of first quarter GDP growth and revised them upwards sharply.  We now anticipate GDP growth of 8.2% in the first quarter.  The economy is starting 2021 with a bang.

Then, there is a $1.9 trillion COVID-19 relief package working its way through Congress with a further infrastructure spending bill in the works later in the year.  All of this additional government spending will further stimulate the economy.

For the first time in a year the end of the pandemic is in sight.  The number of new cases daily has declined from a peak of 245 thousand per day in mid-January to 65 thousand by mid-February.   Indeed, some epidemiologists now believe that the U.S. can achieve herd immunity by the end of April.  Once people become convinced that the virus is under control, they will once again feel comfortable going to restaurants, traveling, staying in hotels, and going to sporting events. 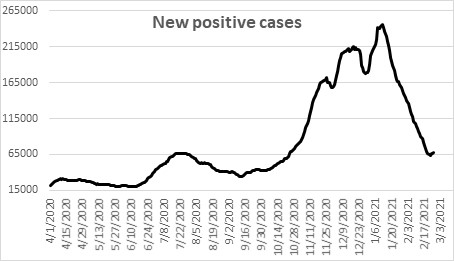 Given all of these factors we anticipate GDP growth of 7.5% for the year.  if that happens any remaining slack in the economy will disappear by yearend. 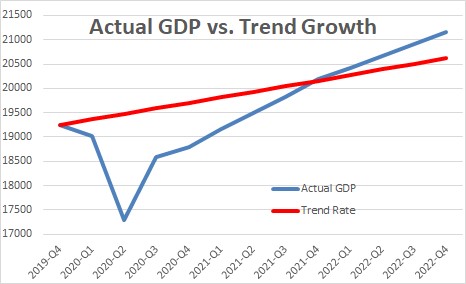 At the same time, the unemployment rate will have declined from its current level of 6.3% to its full employment threshold of 4.0% by yearend.  Restaurants, bars, hotels and airlines will rehire staff.  Manufacturing and constructions firms may finally find some of the skilled workers they are seeking. 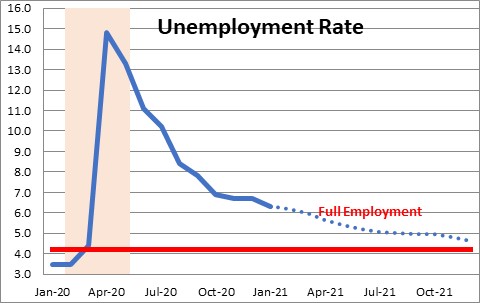 Once the economy reaches full employment, the economy will be in danger of overheating.  We believe that will occur by the end of this year — two years ahead of the Fed’s schedule.  At that point, inflation may begin to climb.

Now, back to the Treasury market.  The yield on the 10-year note was 0.6% last summer.  It is 1.5% today.  That is an increase of 0.9 percentage point in six months.  Clearly, the market has begun to anticipate an increase in the inflation rate and, perhaps, the volume of Treasury securities that will need to be issued to finance yet another record-shattering budget deficit. 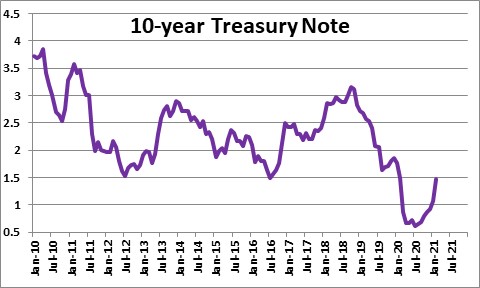 One can track inflation expectations by looking at the difference in yield between the 10-year note and its inflation-adjusted equivalent.  The implied inflation rate began to rise about this time last year from  a low of 1.0% to 2.1% today. 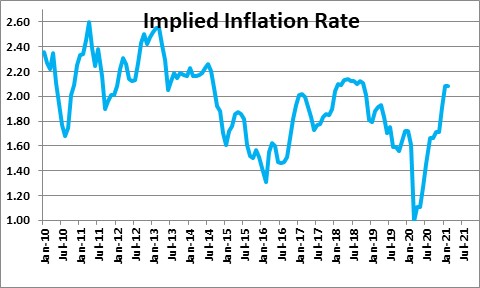 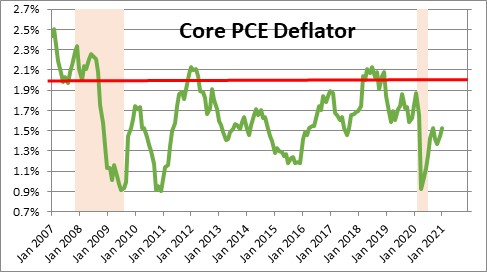 While consumer inflation remains slow at the moment, asset prices are skyrocketing. Stock prices, home prices, commodity prices, and even Bitcoin are surging as investors seek higher returns.  That is a sign that there is too much credit available.

Inflation has remained in check largely because of the extremely deep recession last year.  The unemployment rate surged to 14.7%.  GDP fell far below its potential path.  The economy has partially recovered, and if it grows at the 7.5% pace we expect this year, the unemployment rate should approach the 4.0% full employment threshold by the end of this year and, GDP should get back to its potential growth path.  The economy will be at full employment.  It is at that point that inflation should begin to rise.  To get the workers they need employers will have to bid them away from other firms by offering higher wages and/or more attractive benefits.  They may be able to raise prices because the demand for their goods is so strong. 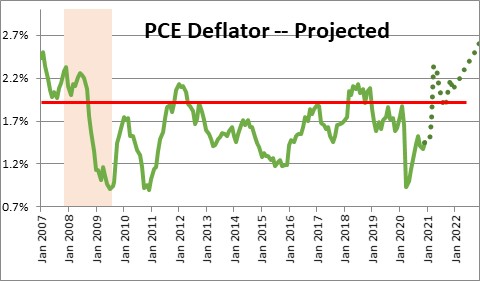 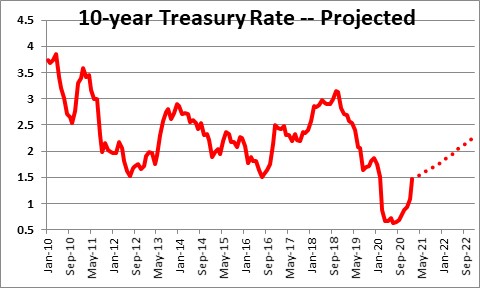 First, if the 10-year note climbs from 1.5% today to 3.1% at the end of next year it would likely run the risk of dumping the economy back into recession.  A 3.1% rate would be the highest rate in a decade.  The Fed is not going to let that happen.  It will buy whatever amount of Treasury securities is required to prevent long rates from spiraling out of control.

Second, if the Fed allows long-term interest rates to rise sharply or, worse yet, if the Fed were to tighten, the interest cost to the Treasury would rise dramatically.  Not a good idea when it has just incurred back-to-back budget deficits in excess of $3.0 trillion.

The bottom line is that inflation is going to rise.  Long-term interest rates are going to climb.  And the Fed is not going to tighten any time in the foreseeable future.