The employment report for October makes it clear that the labor market is rebounding after an August and September slump.  If that is the case GDP growth in the fourth quarter should also rebound from its anemic 2.0% third quarter pace.  For what it is worth we anticipate 8.0% GDP growth in the final quarter of the year.   The swings in GDP growth seem to follow the rise and subsequent fall of new COVID cases.  If our estimate of fourth quarter GDP growth is on target, then growth in the second half of 2021 will average a steamy 5.0%.  That growth rate has been kept in check by severe production constraints which include both a lack of willing and qualified workers, and delivery difficulties throughout the entire supply chain – from the ports, to truck drivers, and warehouse workers.  But at some point those supply challenges will be rectified and, when that happens, GDP will receive as much stimulus as the retarding effect it weathered in the second half of this year.  Meanwhile, with willing workers in short supply, wage pressures are certain to intensify as employers compete with each other to fill their needs.  That, in turn, will further lift the inflation rate and intensify pressure on the Fed to react.  It recently announced a plan to “taper” its monthly purchases of securities, but that will fall short of what it needs to do.  Will it have the courage to raise rates by any significant amount during an election year?   We doubt it.

Employers continue to find bodies it hire from the ranks of those actively seeking employment.  As a result, the unemployment rate steadily declines.  At 4.6% it remains above the Fed’s estimate of the full employment threshold of 4.0%, but every month it gets closer and closer to that mark.  As a result, it becomes increasingly difficult for firms to find the bodies they need.  Higher wages and sign on bonuses are commonplace. Since all firms are doing that, employers must become even more creative.  The employment cost index, which encompasses both wages and benefits, rose at a 5.3% pace in the third quarter.  That brings the year-over-year increase to 3.7%.   It is clear the yearly increase is going to climb throughout 2022. 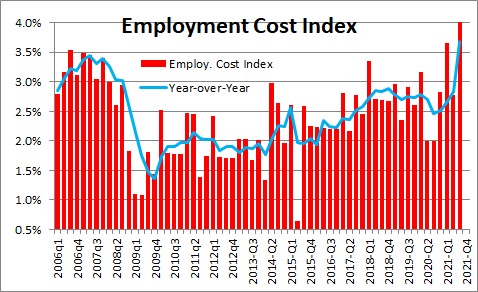 It would be helpful if some of those workers who have chosen to drop out of the labor force could be enticed to return to work.  In October the labor force rose by 104 thousand but it remains 3.0 million below its February 2020 pre-pandemic level.  Some of those are people who chose to retire when the pandemic hit.  Others are women who cannot find or cannot afford day care help to look after the kids.  And some others are choosing not to return to their previous low-paying jobs.  But, grudgingly perhaps, we believe those workers return.  Eventually the savings will run out and they will need jobs.  The longer they hold out the more difficult it will be for businesses to find the help they need, and the more lucrative the incentives they will dangle to prospective hires to make that happen. 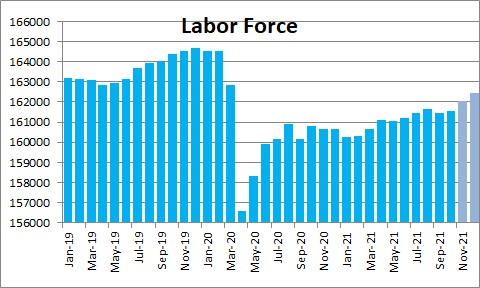 As wage pressures intensity it is an almost sure bet that inflation will continue to climb.  In addition to the labor shortage, the supply chain disruptions are forcing firms to bid aggressively to get the materials they need.  The Fed believes much of the current upward pressure on inflation is a result of these supply difficulties.  It is true that supply chain difficulties are contributing to the upward pressure on inflation and they will eventually abate.  But when exactly will that happen and by how much?  The supplier delivery components of the purchasing managers indexes for both manufacturing and service sector firms are giving no hint that this problem is going to get fixed any time soon.  The comments from its survey respondents suggest that the problem will continue to exist throughout 2022. 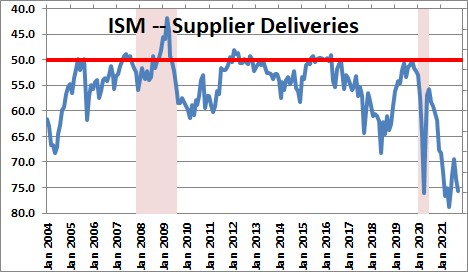 If supply difficulties continue through the end of next year and the labor market gets steadily tighter, how exactly does the inflation rate return to the 2.0% pace that the Fed envisions?  The Fed continues to expect the core inflation rate in 2022 to be about 2.0%.  But the core CPI began to accelerate early this year and has shown no sign of abating.  With labor costs intensifying, rents beginning to climb more rapidly, oil prices above $80 per barrel, and non-energy commodity prices remaining inflated, the Fed’s expectation for inflation seems increasingly off the mark.   The Board’s staff of economists is world class.  Private sector economists don’t often agree but, in this case, they almost uniformly expect an inflation rate far higher than 2.0%.  So who is right?  Can the Fed’s economists see something that the rest of us do not see?  We doubt it, but time will tell. 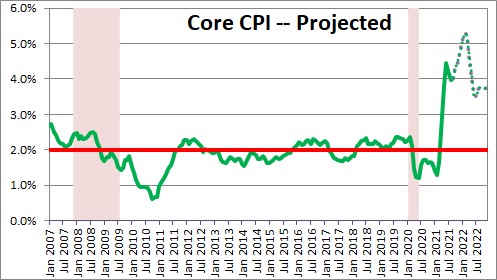 The Fed recently announced its plans to gradually reduce its monthly purchases of U.S. Treasury and mortgage-backed securities from $120 billion per month currently to zero by June of next year.  But, make no mistake, this does not in any way represent Fed “tightening”.  Every month between now and June the Fed’s balance sheet will get larger.  All that is happening is that the growth rate of its balance sheet will be slowing down.  In other words, the Fed will be steadily easing its monetary policy stance.  That sounds woefully inadequate.  It is unlikely that the Fed will choose to raise rates at the same time that it is gradually shrinking its securities purchases.    That means that rate hikes will not be forthcoming until sometime in the third quarter of next year.  With an election looming in November 2022, it is highly unlikely that it will raise rates aggressively after midyear.  In our view, it is falling farther and farther behind the curve.  And that is not a good thing. 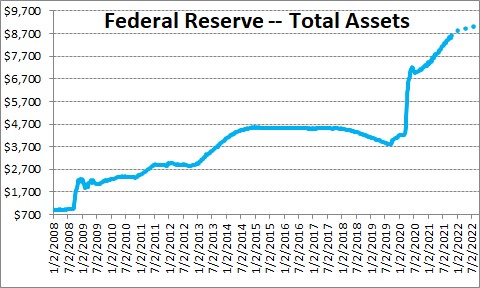