Market Tranquility Will Not Last Long

The two-week holiday period was relatively quiet with the stock market continuing to climb and the economic data generally supportive of somewhat faster GDP growth in the early part of 2020.  During that time period market volatility has fallen dramatically and it is about as low as it has been any time in the past several years.  Do not expect that to last.  Invariably something happens to rattle investors and the stock market swoons.  What will that be this time?  We do not know, but here are a couple of possibilities. 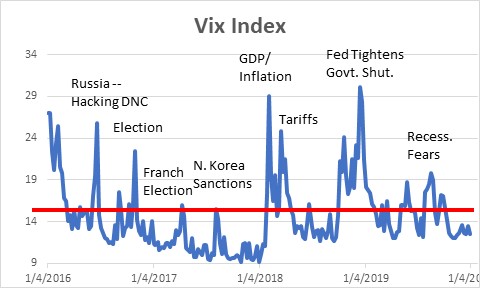 Jobs growth.  Next Friday we will see the employment data for December.  The expectation is that jobs will climb by about 165 thousand in that month.  That is slightly less than the 205 thousand jobs created on average in the past three months but a sizeable gain nonetheless. Could it be bigger?  Smaller?

Looking ahead the federal government hiring of Census workers will soon begin to muddy the employment statistics.  It plans to hire about 550,000 temporary workers to take and process the Census.  This hiring typically gets underway in January and reaches a peak in the spring.  For example, in 2010 government jobs rose 42 thousand in January, 51 thousand in February, and 427 thousand in March.  But those jobs disappeared gradually between April and July.  In 2000 the peak hiring did not occur until May.  Given the tightness in the labor market one might wonder where the government will find all those bodies.  It is encouraging applicants to supplement their full time income by working at night and on weekends.  It is also having to pay far higher wages than it did a decade ago.  These jobs will pay anywhere between $13.50-30.00 per hour.  The Census data will distort the monthly payroll employment gains for about six months.  They will boost the overall gain for a couple of months as those workers are hired, but then diminish the overall increase for several months afterwards as they are let go.  During that period economists will focus on private sector job gains to get a better sense of the underlying trend rate of hiring.

With respect to GDP growth, the hiring of census workers is likely to bias upwards second quarter GDP growth, and then create a modest headwind in the third quarter.  None of this will impact the trend rate of growth, but it will mask the true pace of expansion for a number of months.

Fourth quarter 2019 GDP.  Our first look at fourth quarter GDP growth will be released on Thursday morning, January 30.  The consensus is for an increase of about 1.8%.  Our forecast is for an increase of 2.2%. The range of estimates remains wide but forecasts have been gradually rising.  For example, the widely followed GDPNow forecast by the Atlanta Fed sank to 0.4% in mid-November, but has since been steadily climbing and now stands at 2.3%.  A similar forecast from the New York Fed was also 0.4% in mid-November but has risen to 1.2%.  These two forecasts track the incoming data, make assumptions about the missing tidbits, and come up with an estimate of growth for the quarter.  A 1.1% difference between these two forecasts at this stage of the game is much larger than normal, and almost certainly reflects different outlooks for trade and the change in business inventories.  That is because those two pieces of information are released later than the data flows for consumption, investment, and government spending.  The difference between the two forecasts will probably narrow as the month progresses and additional information is received.  But the outcome is important.  A 1.2% fourth quarter GDP growth rate is tepid and obviously quite different from a 2.3% gain.  The actual outcome could alter economists’ perception of GDP growth for this year.

Stock market.  The stock market is on a roll.  People note the impressive 29% increase in the S&P 500 index this year.  However, the market tanked late last year as recession fears spread and worries about a protracted government shutdown dampened investor spirits.  Indeed, between, mid-September and mid-December the S&P fell 17%.  We would argue that the stock market run-up in the first half of last year was largely a rebound as the market’s worst fears did not come to pass.  The rally continued in the second half as the steady escalation of the trade war between the U.S. and China came to a halt, the Fed cut rates three times, and signs of faster growth outside the U.S. emerged.  The market may currently be somewhat ahead of itself which suggests that a correction may not be too far distant.  Having said that, the steady uptrend remains firmly in place as low rates, tax cuts, and the cessation of the trade war create a healthy economic backdrop. 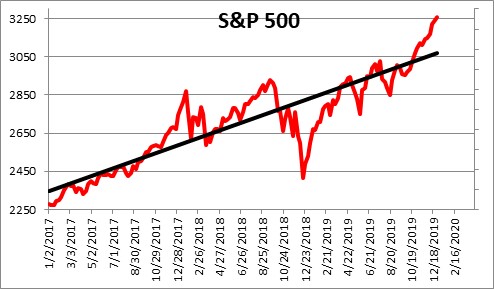 Impeachment/Election.  At the moment the impeachment proceedings thus far have produced a big yawn.  The House impeached the president, but the Senate will almost certainly not remove him from office.  This is being viewed, correctly or not, as typical election-year politics.  However, once the two candidates are selected by July, summer surprises are sure to roil the markets between then and November.

Enjoy the market calm for a while.  It is not going to last long.