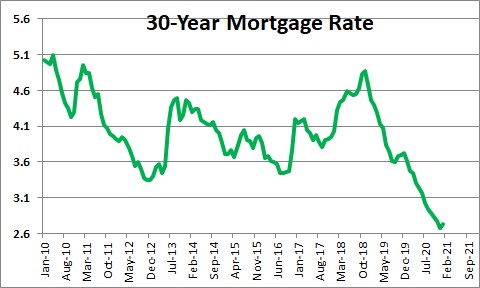 Once the recession began in December 2007 the Fed tried to stimulate the economy and ultimately pushed the funds rate almost to 0%.  It remained at that record low level until December 2015

By the middle of 2019 the pace of economic activity had moderated somewhat with growth slipping to about 2.0% but, at the same time,. the Fed began to grow increasingly bothered by the persistent shortfall in the inflation rate relative to the Fed’s 2.0% target.  This resulted in the Fed cutting rates three times in the second half of 2019 from 2.25% to 1.5%, and that caused mortgage rates to slip from its earlier high of 4.9% to 3.6% by yearend.

Then, along came COVID and the government imposed a strict quarantine to, hopefully, slow the rate of spread of the virus.  The Fed cut rates quickly from 1.5% in February to 0% by mid-March as the U.S. economy entered the deepest recession in its history.  At the same time the Fed bought $3.0 trillion of U.S. Treasury and mortgage-backed securities.  This combination of events pushed mortgage rates to their current record low level of 2.7%.

In addition, the Fed has pledged to keep interest rates low until such time as the economy gets back to the full employment level and the inflation rate climbs above its 2.0% target for an extended period of time.  Those two conditions are unlikely to met be for at least another two years.  We expect the 30-year mortgage rte to rise from 2.7% currently to 3.2% by the end of 2021 and 3.5% by the end of 2022.