GDP declined in the first two quarters of the year.  Some economists suggest that the economy was in recession during that period of time or about to go into one.  But many economic indicators tell us that was not the case.  Employment, industrial production, and consumer spending have been steadily rising for months.  If the economy truly were in a recession in the first half of the year each of those indicators should have fallen.  Any notion that the economy was in or close to a recession in the first half of the year was extinguished by the July employment report.  Employment surged by 528 thousand in that month.  The unemployment rate declined 0.1% to 3.5%.  Indeed, the employment report for July makes it abundantly clear that the third quarter is off to a fast start and suggestive of a significant rebound in GDP growth in that quarter.  Furthermore, long-term interest rates have fallen by 0.7% from their recent highs which will provide further stimulus to the economy as it moves into the fall.  If that happens the inflation rate is unlikely to subside substantially any time soon.  That means that the pressure is still on Fed to keep boosting rates rapidly, and it essentially ices the case for a third consecutive increase of 0.75% in the federal funds rate to 3.25% at the next FOMC gathering on September 20-21.

The employment report for July was unambiguously strong.  Payroll employment rose by a stunning 528 thousand in that month.  And this was not just a July aberration.  In the past three months employment has climbed by an impressive 437 thousand per month. 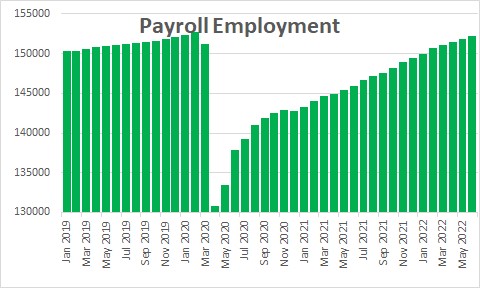 At the same time the unemployment rate declined 0.1% to 3.5% in July.  That is both good news and bad news.  It is good that so many workers still have jobs.  But it is bad news because the Fed needs to boost the unemployment rate above its so-called full-employment level to perhaps 4.5% to eliminate some of the upward pressure on wages.  Slower growth in wages will eventually help to lower the inflation rate. 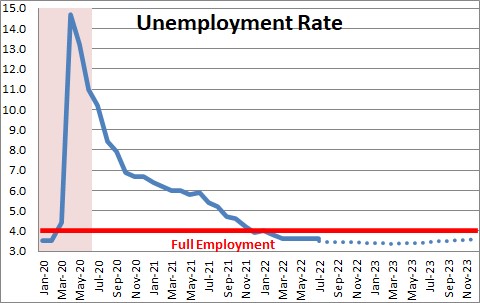 Presumably those additional workers in July were producing something so, as a result, we have boosted our projected third quarter GDP growth rate to 2.0%.  To whatever extent one thinks that growth slowed in the first half of the year that brief slowdown appears to have ended.  The economy is expanding nicely.

Consider, too, that long-term interest rates have fallen sharply in the past six weeks.  After reaching a peak of 3.5% in mid-June the yield on the 10-year note has fallen 0.7% to 2.8%.  The 30-year mortgage rate has declined from 5.8% to 5.0% in that same period of time.  This unprecedented decline in long rates was based on a belief that the Fed is committed to doing whatever was required to break the back of inflation.  The Fed’s action would trigger a recession which would bring down inflation and allow the Fed to actually lower rates by the middle of next year.  We believe this view is way out of sync with reality. We expect the Fed to raise the funds rate to 4.0% by the end of this year.  With  the core CPI likely to increase 6.6%,  the real funds rate at yearend would still be negative by 2.6%.  Negative real interest rates are not going to slow the pace of economic activity.  Nor are they going to allow any significant decline in the inflation rate.  The Fed needs to keep raising rates until they ultimately turn real rates positive. 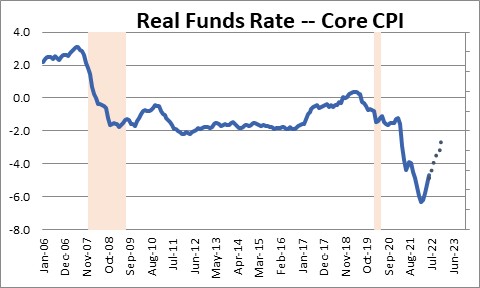 If the Fed raises the funds rate rapidly and inflation does not subside, our sense is that long rates will soon rebound.  For what it is worth, we expect the yield on the 10-year note to climb from 2.7% today to the 4.0% mark by the end of this year and perhaps even higher in 2023. 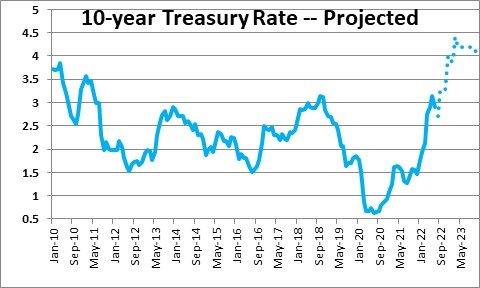 As we see it, the economy is on the mend from its early year slump.  Inflation is unlikely to improve any time soon.  That will require the Fed to keep raising short term rates.  As short rates climb and inflation does not quickly retreat, long rates are going to climb.  If the Fed is as serious about quelling inflation and bringing it back down to the desired 2.0% pace, then the Fed funds/10-year spread is likely to invert in the early part of next year (which means that Fed policy is finally “too tight”).  That, in turn, will lead to the long-awaited recession in 2024.  It is coming, but not for a while yet.