One More Thing to Worry About — Oil

At the end of last year crude oil prices were steady at about $63 per barrel. Then the bottom fell out. This week oil traded below $20 per barrel — the lowest since 2002. It was not long ago that low oil prices provided a significant boost to GDP growth. The U.S. was a net oil importer so our factories were able to lower their cost of production and boost profits by importing cheap oil, and consumers benefited from low pump prices. But the fracking boom has sharply boosted production and the U.S. is now the world’s largest oil producer. So while consumers and factories that use oil still benefit from today’s low prices, the oil producing sector is getting crushed. In this new world it is no longer clear that low oil prices stimulate economic activity. 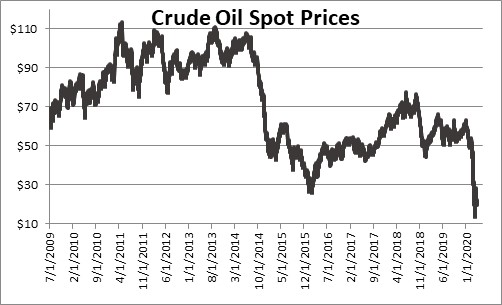 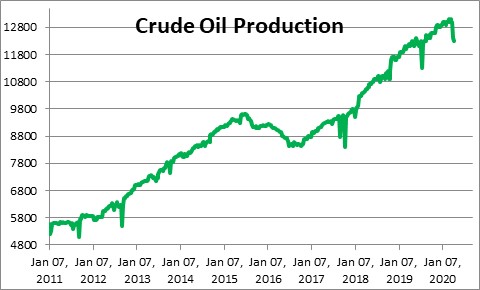 In the process the U.S. became the world’s largest oil producer in June 2018 surpassing perennial giants Russia and Saudi Arabia. 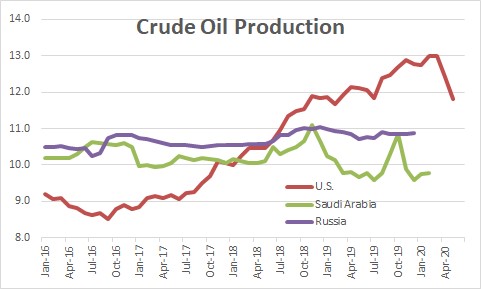 As U.S. oil production climbed the OPEC countries and Russia began to steadily lose market share from 39% in 2013 to 34% today. 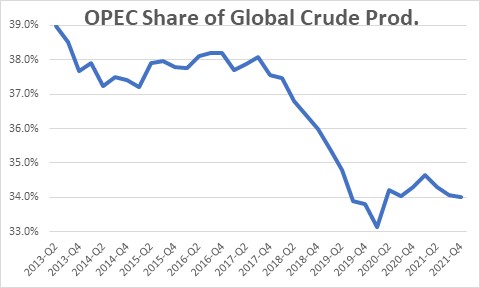 At the beginning of this year China was able to quickly corral the spread of the corona virus by quarantining Wuhan and other cities. As the virus spread to other countries, they adopted similar tactics. As a result, global economic activity came to a screeching halt. The IMF expects global GDP growth to plunge 3.0% this year. 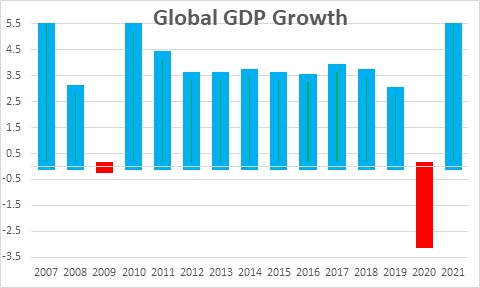 In the process, the demand for oil has also collapsed (the yellow line in the chart below). But producers did not quickly curtail production. As a result, oil production in the first quarter exceeded supply by 5.7 million barrels per day (the blue bars). In the second quarter the gap is expected to widen to 11.4 million barrels per day. The world is awash in surplus oil. There is no place to store it. Oil tankers are being filled and going nowhere. 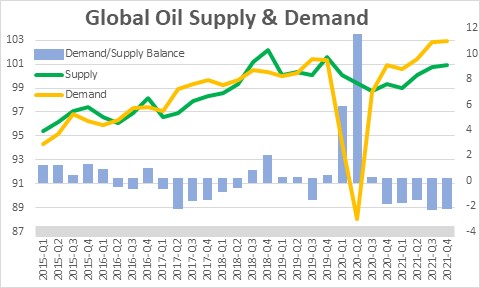 Against this background prices plunged from $63 per barrel at the beginning of the year to $41 by early March. In an attempt to boost prices the Saudis suggested that OPEC countries and Russia cut production. But Russia, tired of seeing its market share steadily decline refused to agree. Furious, the Saudis announced price discounts of $6-$8 per barrel on March 9. On that day oil prices plunged $10 per barrel from $41 to $31. The Dow Jones Industrial Average sank 2,000 points. On March 10, the Saudis said that the kingdom would increase production from 9.7 million barrels per day to 12.3 million bpd. Prices have continued to slide and are now at $20 per barrel. 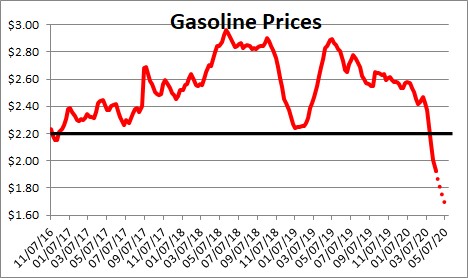 As crude prices fell gasoline prices did the same thing. They have dropped from $2.57 at the beginning of the year to $1.85. But wholesale prices have fallen even more rapidly and it is clear that gasoline prices are on track to continue their descent to about $1.65. For those of us in the lowcountry pump prices average about $0.25 per gallon below the national average, so we are talking about an eventual decline to perhaps $1.40.

For consumers that is great news, particularly since 22 million Americans have lost their job in the past month and are trying to save money wherever they can. With a 20-gallon tank a fill-up today costs $33 versus $51 just a few months ago.

But the oil and gas industry now employs nine million workers and makes up 7% of GDP. That includes oil exploration, production, processing, transportation, and marketing. For these oil-related industries the recent drop in prices is devastating. Most experts estimate the break-even point for oil producers is about $50 per barrel, although for some shale producers it could be as low as $40. None of them can operate profitably at $20.

A decade ago the oil-producing sector of the economy was relatively small. A drop in prices clearly benefited consumers and oil-consuming industries far more than the negative impact on oil production.

But as the oil-production sector has grown more people work in that industry. And because oil exploration and extraction are expensive and highly capital-intensive, the industry plays an important role in determining growth in the investment component of GDP. Suddenly, the math has gotten more complicated. Consumers and oil-consuming businesses still benefit from a drop in oil prices, but the drag from the oil-producing sector has gotten bigger. With oil prices currently around $20, many of those oil-producing companies will be in serious trouble if low prices linger. There is probably still a net benefit to the U.S. from low oil prices, but it is not nearly as much as it used to be.

In addition to the dramatic hit on the economy from the measures imposed to halt the spread of the corona virus, we now have to worry about the health of oil-producing companies.