The Federal Reserve did what was expected this week by raising the funds rate 0.75% to a range of 3.75-4.0%.  It also indicated that it would soon be appropriate to reduce the pace of tightening.  That, too, was expected.  But the euphoria was short-lived when Fed Chair Powell added in the post-meeting press conference that the “ultimate level of interest rates will be higher than previously expected.”  That was not expected and sent the markets in a tizzy.  The Fed’s thoughts about the peak funds rate were not available at this meeting but will be released following the next FOMC gathering on December 13-14.  Unfortunately, leaving such a statement open-ended set off a flurry of speculation.  In September the Fed suggested that the funds rate would peak at 4.6% at the end of this year.  Is he now talking about 5.0%?  5.5%?  Higher?  How high does the Fed think the “real” funds rate might go?  When does it get to that level?  Which measure of inflation will it use to make that determination?  Lots of questions.  The answers remain elusive.

We wonder why everybody remains so laser-focused on the Fed and overanalyzes every utterance from a Fed official.  The reality is that the Fed has not understood what was happening with inflation since it first began to rise rapidly in early 2021.  As a result, it was at least a year late in initiating the tightening process.  The first rate hike was not until March 2022.  Meanwhile, it has steadily upped its assessment of the peak funds rate – from 2.1% in December of last year to 2.8% in March, 3.8% in June, and 4.6% in September.  Who knows what it will say next month?  But given this track record, who cares?

The Fed seems to think that a +0.5% real funds rate represents a “neutral” policy stance.  It envisions a 2.5% funds rate coupled with a 2.0% inflation rate.  That may not be a bad assessment when inflation is steady around its targeted 2.0% pace.  But inflation is not even close to 2.0% and who knows exactly when and how quickly it will retreat?

Historically, when the Fed has embarked on a path of tightening, the funds rate has had to rise several percentage points higher than the inflation rate to slow the economy and reduce inflation.  For example, prior to the 2008-09 recession the real funds rate climbed to +3.0% before the economy finally began to respond.  In the  2000 recession it was +4.0%.  And in the late 1970’s when inflation rate was double-digit and well entrenched it took a real funds rate of +8.0% to do the trick. 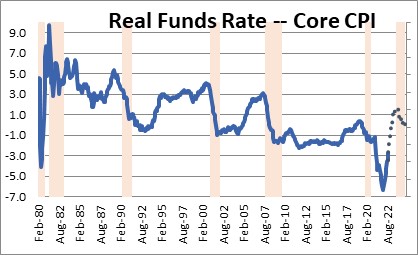 The calculation of the appropriate real funds rate going forward is murky.  The real funds rate depends, of course, upon the level of the funds rate. Our sense is that the Fed will continue to raise the funds rate from 4.5% at the end of this year to 6.0% by the middle of next year.  That seems high, but the real funds rate by that time will be slightly less than +2.0% depending upon which measure of inflation one chooses to use.

The CPI is the most widely recognized inflation measure.  By the middle of next year we believe the core CPI will have slowed from 6.0% currently to 4.4%.  The Fed’s preferred measure of inflation is the core personal consumption expenditures deflator.  We estimate the core PCE will have slowed from 5.1% currently to 4.1%.  If the funds rate is 6.0% the real funds rate by the middle of next year will be somewhere between 1.6-1.9% depending upon which inflation measure one chooses to use.  So while a 6.0% funds rate may sound high, in real terms it is not excessive.