A Year of Transition and Healing

It is that time of the year when economists gaze deeply into their (somewhat hazy) crystal balls to provide a glimpse into the future.  So here we go:

At this time last year the consumer was overcome by fear – the stock market was plunging, financial institutions were failing, property values were falling, and confidence was collapsing.  But policy actions by the Fed, the White House, and Congress saved the day.  By early spring the stock market had turned upwards, confidence began to climb, GDP rose in the third quarter with more growth expected in the fourth quarter.  The worst is behind us.  Having said that, economic headwinds will curtail growth during 2010.

The biggest challenge for the consumer is debt.  As shown in the chart below, consumers piled on debt far in excess of their ability to pay it back for 30 years.  And why not?  The stock market was rising steadily and adding to wealth.  Home prices marched relentlessly upwards.  Mortgages were readily available with no down payment.  The only other time in our history when spending was so out of control was in the 1920’s.  Then came the depression, and we spent the next 15 years paying down debt.  While no two periods are exactly alike, the current debt problem is sufficiently large that consumers should be in debt paydown mode for years to come. 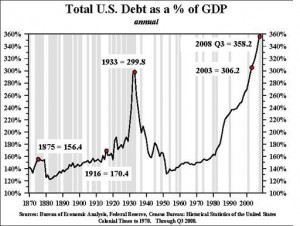 A second obstacle for the consumer is the loss of wealth.  Those same two assets that rose so sharply for 30 years – house prices and the stock market – suddenly turned south.  Home prices fell 20-25%.  The stock market lost more than half its value.  Consumer net worth fell 25%.  With the stock market rally it has recovered to some extent but is still 15% below the peak level attained in 2007.  Retirement plans have been postponed.  Retirees have been forced back into the job market.  For years Americans had no need to save because gains in the stock market and home values were effectively doing the saving for them.  That is no longer the case.  As a result, our savings rate – the amount we tuck away into savings each week from our paycheck — had been hovering around zero per cent for years.  But now it has rebounded to the 4% mark as we try to recover our lost net worth.  The problem for 2010 is that every dollar we save is one less dollar that gets spent. 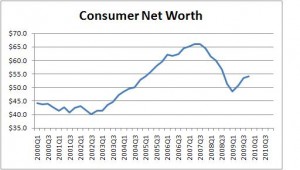 Third, there is the issue of credit availability.  Banks have been stung by losses on their holdings of mortgage debt and credit card debt.  They are under considerable pressure from the Fed to raise capital.  In addition, they will have to pay the FDIC three years worth of deposit insurance premiums by the end of this year.  Not surprisingly, banks are not anxious to lend.  And when they do so it is only to the most creditworthy borrowers.  They have tightened their lending standards by requiring larger down payments and higher credit ratings.  Many seemingly creditworthy borrowers are being turned away.  This inability to attain credit is having the biggest negative impact on consumers and small businesses.  Larger businesses have been relatively successful in tapping the credit markets for funds.  Banks are catching most of the heat for the fact that loans are not growing, and some of that criticism is justified.  But, as described above, consumers and small businesses are currently more inclined to pay down debt than add to it.  Whether the problem is on the demand side or the lending side is irrelevant.  Without loan growth, the economy is not going to grow quickly.

Finally, there is the issue of the 10.0% unemployment rate.  Unemployed workers do not have a paycheck.  To make ends meet they dip into savings.  But how much savings do they have?  Three months?  Six months?  When the savings runs out they cannot pay the bills.  They may lose the house to foreclosure.  They can no longer pay the credit card bills.  The car gets repossessed.  The moderate pace of economic activity expected this year will not generate sufficient jobs to bring the unemployment rate down quickly.  Most likely it will still be 9.5% at yearend, and 8.0% by the end of 2011.  To the extent workers are unemployed and without income, their spending will be limited.  Even those workers with jobs will spend cautiously because of a fear that their job could be the next to go.

Most jobs are created by small businesses.  But right now there is considerable uncertainty about the outlook for health care and taxes.  Will small businesses be required to provide health care?  How much will they have to pay?  What will happen with taxes?  Remember, the Bush tax cuts are scheduled to end on December 31 of this year.  What new taxes lie in store?  Until this uncertainly is resolved small business hiring is likely to be modest.

What about inflation?  The Fed keeps talking about “considerable slack” in the economy which will keep inflation in check.  Part of what they are referring to is the very high, 10% unemployment rate.  Most economists believe that full employment is achieved when that rate is about 5.0%.  At that level everybody who wants a job presumably has one.  As the unemployment approaches the 5.0% mark, wage pressures emerge which are ultimately passed through to consumers in the form of higher prices.  But even if the economy produces 250,000 jobs per month, it will take five years for that to happen. 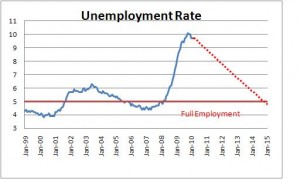 The other factor the Fed cites is the low level of factory utilization.  That rate is currently 68.4% and rising slowly.  When the economy is humming that rate will be 80.0%, at which point businesses find that they have the ability to raise prices and inflation arises.  But, once again, it may take five years for that to occur.  Thus, the Fed is relatively confident that inflationary pressures will remain subdued for some time to come. 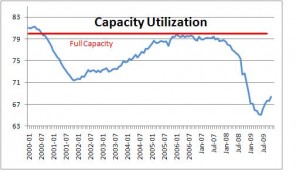 Given the “considerable slack” describe above, the best bet is that the Fed remains on the sidelines in 2010 and leaves short-term interest rates at 0%.  But during the past year the Fed has purchased all sorts of mortgage securities and credit card debt to provide necessary liquidity.  That action is potentially inflationary.  Eventually the Fed must reign in those outstanding reserve balances.  But when?  If they move too quickly they run the risk of dumping the economy back into recession.  If they proceed too slowly they run the risk of igniting inflation.  For now, the Fed has the luxury of being able to proceed cautiously.  But if investors begin to worry about inflation, the Fed could be forced into action sooner than it anticipates. 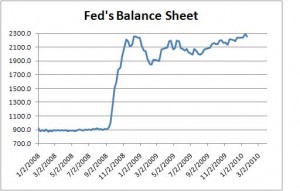 Make no mistake, the economy will expand in 2010, and 2.5-3.0% is an acceptable pace.  And very soon the economy will begin to create jobs.  Those are good things.  But the economic headwinds described above can only abate with time.  Thus, 2010 is probably best characterized as a year of transition and healing with low inflation and low interest rates.