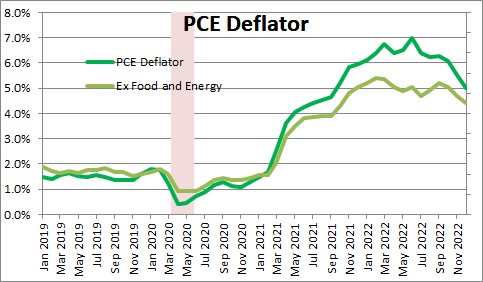 There are many different measures of inflation, but the one that the Federal Reserve considers to be most important is the personal consumption expenditures deflator, in particular the PCE deflator excluding the volatile food and energy components.

The PCE deflator rose 0.1% in December as energy prices declined, after having increased 0.1% in November.  The year-over-year increase now stands at 5.0%.

Excluding the volatile food and energy components the PCE deflator rose 0.3% in December after having risen 0.2% in November.  The year-over-year increase is now 4.4%.  This is the inflation measure that the Fed would like to see rise by 2.0%.   For the longest time the Fed believed the run-up in inflation was temporary, but it has now changed its mind and is prepared to continue raising interest rates in 2023 to slow down the rate of increase in inflation.  We believe inflation will stay elevated for some time to come.,………………….

The  purchases of Treasury securities by the Fed in 2020 and 2021 caused money supply growth to surge.  We all learned back in our basic economic classes that money growth is the cause of inflation.  However, the length of time between a pickup in money growth and an increase in inflation is both long and variable.  Thus, the recent increase in  money growth has caused the inflation rate to climb well above the Fed’s 2.0% target for a protracted period of time.  Money growth has slowed in recent months.  The problem is that the earlier rapid growth pushed the level of M-2 far higher than its trend path would suggest.  At the moment that difference is $2.6 trillion which represents surplus liquidity which will make it difficult for inflation to fall quickly any time soon. 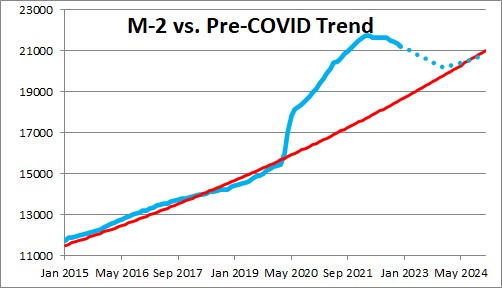 After having risen 4.4% in 2022 we expect the core PCE deflator to climb 3.8% in 2023. The funds rate is currently 4.4%. The core PCE deflator today is 4.4%,.  This means that the inflation-adjusted or real funds rate today is basically 0.0% .  This is not high enough to slow the pace of economic activity and significantly reduce the inflation rate. 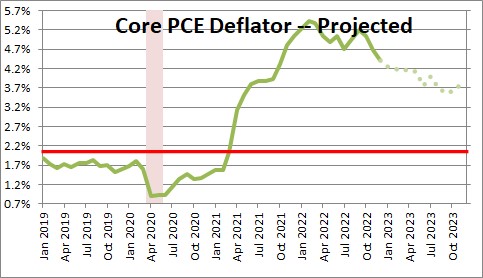 We expect 1.2% GDP growth in 2023 as employment keeps rising, wages continue to climb, and real interest rates do not turn positive until midyear.