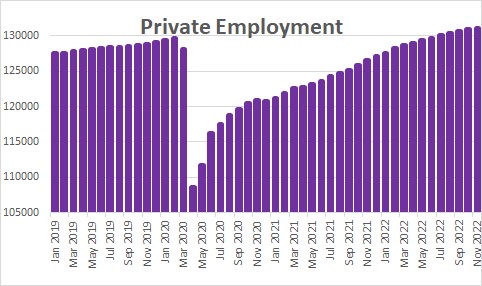 Private sector employment rose by 221 thousand in November after having risen 248 thousand in October and 255 thousand in  September.  In the past three months the average increase has been 241 thousand.  At the beginning of this year we were routinely seeing employment gains of  550-600 thousand per month.  Thus, the labor market has clearly softened from where it was at that time, but the other reality is that it has held up well in the face of sharp increases in interest rates and a significant drop-off in stock prices.

In addition to hiring people, businesses can also alter the hours of existing employees.  The nonfarm workweek fell 0.1 h our in November to 34.3 hours after having been unchanged in October at 34.5 hours.  It has been declining slowly from where it was at the beginning of the year..  As the Fed raises interest rates most economists expect a recession to occur in the not-too-far-distant future.  However, firms are having difficulty finding workers so they choose not to lay off many people.  Instead, they are choosing to work their existing employees shorter hours.  But keep in mind that prior to the recession the workweek was 34.4 hours so at 34.4 hours currently it is hardly indicative of economic weakness. 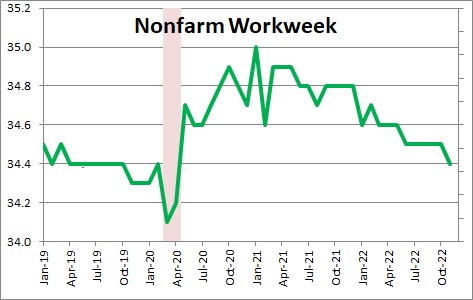 While employment continues to climb, jobs are still not getting filled.  Job openings have fallen slightly in the past couple of months but they declined from a record high level of 11.7 million to 10.3 million.  Firms continue to be unable to fill open positions. 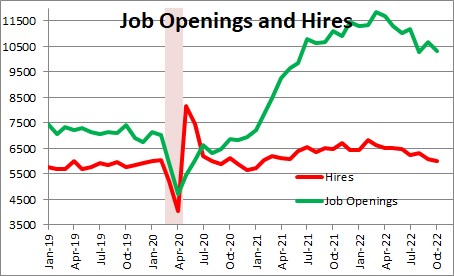 The changes in  employment and hours worked are reflected in the aggregate hours index which fell 0.2% in November to 113.2 after having risen 0.2% in October .  This index  appears on track to rise at a moderate 1.4% pace in the fourth quarter. 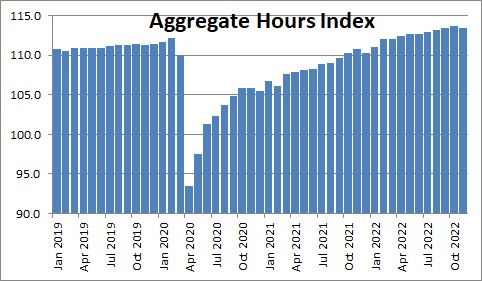 Jobs in the leisure and hospitality industries increased  88 thousand in November after adding 60 thousand workers in October.  Employment in this sector is still 1.0 million below the February 2020 pre-recession level.  The reality is that many pre-pandemic hospitality workers have chosen to seek employment in other industries. 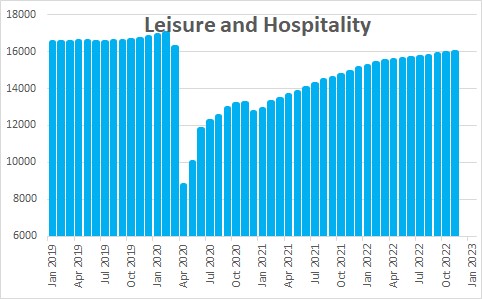