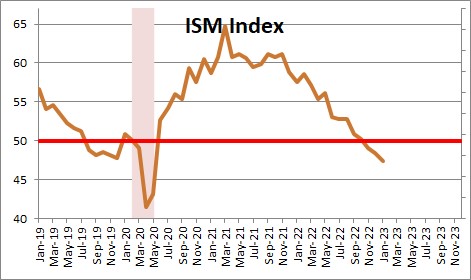 So while the economy is slowing, it is not yet in danger of slipping into recession despite the results from this ISM report for the manufacturing sector.

The Institute for Supply Management Chair for the Survey Committee Timothy Fiore said, “The January Manufacturing PMI® registered 47.4 percent, 1 percentage point lower than the seasonally adjusted 48.4 percent recorded in December. Regarding the overall economy, this figure indicates a second month of contraction after a 30-month period of expansion. The Manufacturing PMI® figure is the lowest since May 2020, when it registered a seasonally adjusted 43.5 percent.”

Comments from survey respondents include the following:

The orders component fell 2.6 points in January to 42.5 after declining 2.1 points in December and 2.0 points in November .  None of the 18 manufacturing industries reported growth in new orders in January…  Fiore noted that, “Uncertainty regarding future demand, buyer/supplier disagreements on prices and lead times, and hangover from overordering in 2021 and 2022 continue to weigh heavily on the index.”   A reading of 52.9 is generally consistent with an increase in the Census Bureau’s series on manufacturing orders thus durable goods orders is likely to decline in January. 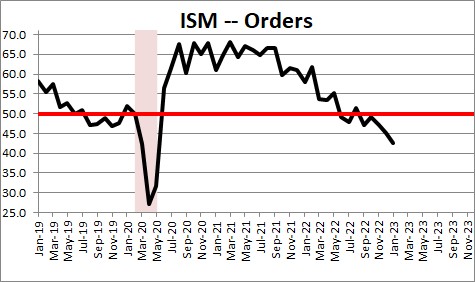 The production component fell 0.6 point in January to 48.0 after declining 2.9 points in December and 0.8 point in November  Fiore noted that, ““Of the top six industries, only one —  Computer and Electronic Products — expanded in January. The Production Index contraction is a strong indicator that backlog reduction is not sufficient to maintain production growth. Also, weak contraction in the Production Index supports manufacturing executives’ strategy to stretch out output during the first half of 2023, as panelists’ companies attempt to retain workers to prepare for better second-half performance,” An index level of 52.5 is generally consistent with an increase in industrial production.  Thus, industrial production is likely to decline in December. 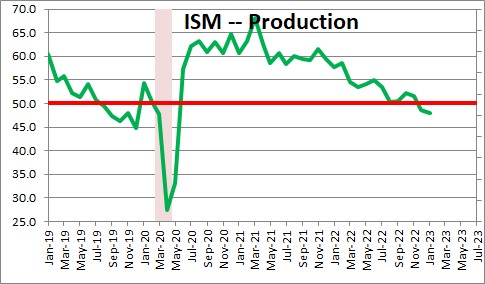 The delivery performance of suppliers to manufacturing organizations rose 0.5 point in January to 45.6 after having fallen 2.1 points in December and having risen 0.4 point in November,  This means that supplier deliveries were actually faster for a fourth straight month in January  The last time that survey participants registered faster delivery times since March 2009.  Fiore noted that panelist comments indicate early signs of sellers’ eagerness to fill up order books after nine months of softening new order levels. 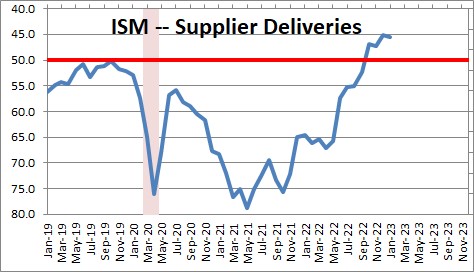 The employment index fell 0.2 point in January to 50.6 after having risen rose 2,4 points in December after having fallen 1.6 points in November.   Fiore noted that,  “Labor management sentiment reversed in the month, with a strong majority of panelists’ companies attempting to hire compared to reducing their employment levels. Although layoffs are occurring, there is a 4-to-1 hiring to reduction ratio (2-to-1 in the previous four months) as companies make decisions to retain workforces to support projected second-half growth. Turnover rates remained stable. For those companies increasing their head counts, comments continue to support an improving hiring environment.” An index reading above 50.5 is generally consistent with an increase in the BLS data on manufacturing employment. 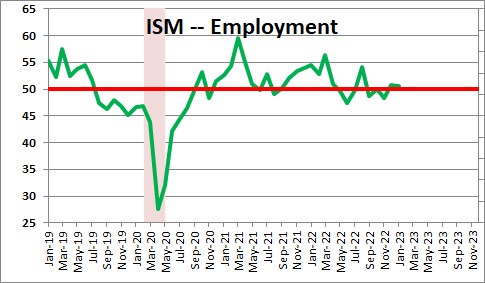 The backlog of orders rose 2.0 points in January to 43.4 after rising 1.4 points in December to 41.4 after having fallen 5.3 points in November. “Backlogs contracted again at notable rates, as weak new order levels negatively impacted manufacturing planning, resulting in fewer new orders to suppliers. Panelists continue to work off backlog (overdue orders) as new order rates continue to soften.”  The index in November recorded its lowest level since May 2020, when it registered 38.2 percent.”” said Fiore. 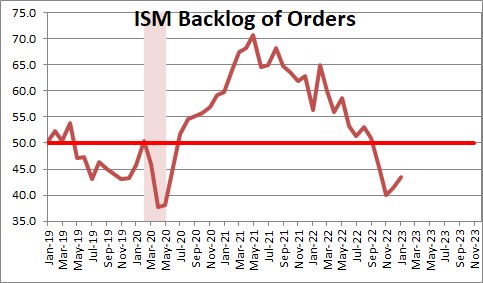 At the same time customer inventory levels 0.8 point in January to 47.4 after  having fallen 0.5 point in December and having rose 7.1 points in November.  Fiore said that,  “Customers’ inventory levels remain ‘just right.’ January’s performance indicates that panelists’ companies sellers and buyers are finding a fair balance regarding inventory transfers,” The current index level is no longer providing positive support to future manufacturing expansion,” 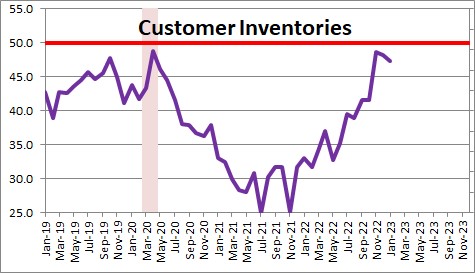 As the orders index fell 2.6 points while the customer inventories index declined slightly, the ratio or orders to inventories was unchanged at 0.9 after having fallen 0.1 in December.  Orders and inventories are roughly in line with where they were prior to the recession.  . 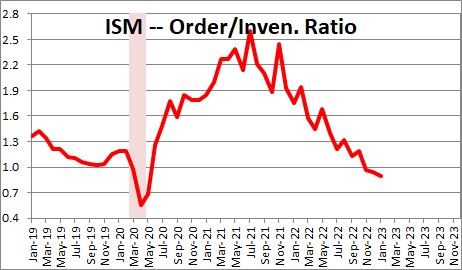 The prices paid component rose 5.1 points in January to 44.5 after having declined 3.6 points in December and 3.6 points in November. Raw materials prices fell In October, November, and December fand January for the first time since May 2020.  Fiore noted that,  “This ties the longest streak of declining Prices Index readings since the onset of the pandemic, from February through May 2020. Between April and December 2022, the index decreased 47.7 percentage points, including a combined 26-percentage point plunge in July and August. Only two of the top six manufacturing industries (Computer & Electronic Products; and Machinery) reported price increases in January. Panelist companies reporting ‘same’ or ‘lower’ prices continues to be the result of inventory dynamics preventing buyers and sellers from reaching agreements, which would unleash more new orders,”  A prices index above 52.6 is generally consistent with the Bureau of Labor Statistics PPI index for Intermediate Materials. 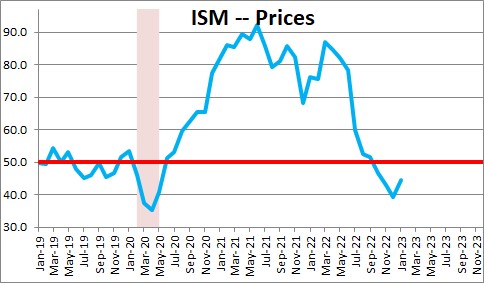