In a speech to the Economic Club of New York, Fed Chair Powell did a nice job of highlighting the benefits of full employment.  In such a situation benefits accrue to all sexes, races, education, and income levels.  He then noted that the labor market today is not even close to full employment primarily because the labor force has declined by four million – mostly low wage workers — since February of last year.  These people lost their jobs during the recession and have become so discouraged that they have stopped looking for employment.  As a result, Powell concludes, monetary and fiscal policy should pull out all stops to re-attain full employment quickly.  Our problem is that he neglected to point out that the unemployment rate has fallen from its peak of 14.8% to its current level of 6.3% faster than at any time in our history.  Furthermore, many of those workers who have dropped out of the labor force have done so as the result of state and local restrictions on the ability of many firms to do business.  As the spring and summer progresses and the vaccine slows the rate of spread of the virus, state and local governments will allow more and more businesses to re-open.  In the process many of the four million workers currently missing from the labor force will once again seek — and find — employment.

Powell noted that the decade long period of expansion caused the unemployment rate to decline to 3.5% which was lower than the 4.0% rate that the Fed regards as full employment – the level at which everybody who wants a job presumably has one.  But full employment is an elusive concept and in recent years estimates have been steadily revised downwards.  Powell points out — correctly — that even at 3.5% there was still no sign of a run-up in inflation which suggests that the economy had not yet achieved full employment.  Could it be 3.0% or lower? 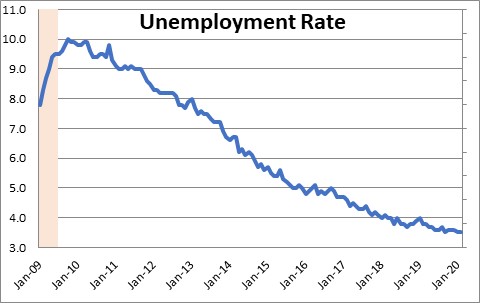 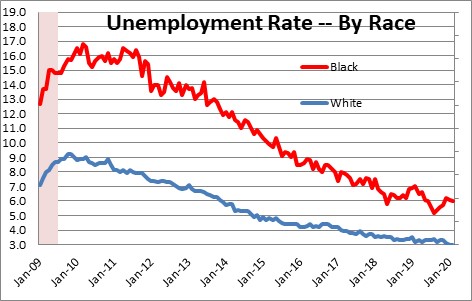 As the decade of expansion progressed lower wage workers – those in the bottom quartile – found their income rising at a 4.5% pace — considerably more rapid than higher earning individuals.  They were closing the gap. 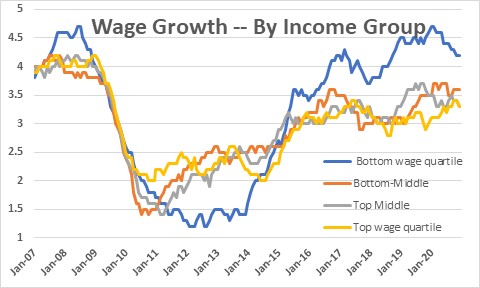 The participation rate amongst the working age individuals – the percent of workers in the economy who are employed or actively seeking employment – climbed to the highest level in a decade. 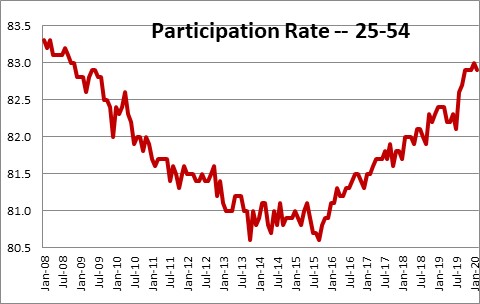 In short, with a prolonged expansion during which the unemployment rate falls to the full employment threshold, everybody wins.  Benefits accrue to all sexes, races, education, and income levels.

But then along comes the virus and the lockdown and everything changed.  Payroll employment plunged by 22 million workers in two months, the overall unemployment rate surged from 3.5% to 14.8%.  It climbed for all sub-categories – whites, blacks, men, women, all education and income levels.  The participation rate fell more rapidly than at any time in our history and it has only partially recovered. 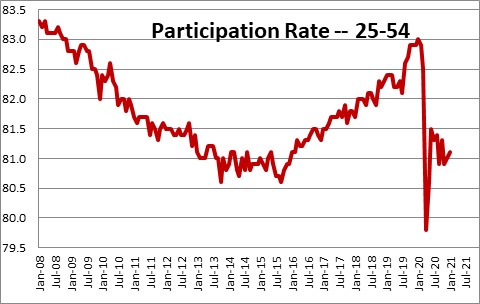 Powell goes on to point out that the official unemployment rate is biased downwards and is overestimating the actual improvement in the labor market.  Rather than 6.3% if the Fed includes all four million people that have dropped out of the labor force since February, the unemployment rate would actually be 10.0%.  But this is where we believe he is overstating his case.

Of the 10 million workers that remain unemployed many of them are in industries that have been hit hard by the virus and are being prevented from working by state and local government restrictions.  For example, 2.0 million unemployed workers are in the leisure and hospitality industry, 1.1 million in retail trade, 1.0 million teachers, 1.6 million in manufacturing and construction where firms struggle to comply with social distancing requirements, 0.6 million in transportation (think airline pilots and mass transit employees).  As the vaccine shots proceed at more than 1.0 million people per day and the pace of the virus slows dramatically, state and local governments will begin to loosen their restrictions and many of these unemployed workers will start to look for – and find – jobs.  We believe that the labor market will continue to improve rapidly in the spring and summer months without any further assistance in the form of a $1.9 trillion fiscal stimulus package.  While we may believe this additional spending is unnecessary, the reality is that it is coming.

Additional government spending is not costless.  It needlessly inflates the budget deficit which is likely to be in excess of $3.0 trillion for the second year in a row.  It will boost the ratio of U.S. Treasury debt in relation to GDP well beyond its World War II record high level.  And it is going to push the inflation rate higher – perhaps far higher than what the Fed might like to see.

Some economists have been expecting inflation to accelerate for a decade and it never materialized.  This time seems different because growth in the money supply has risen by a breathtaking 26% in the past year.  The fiscal stimulus at the end of the 2008-09 recession never caused an outsized increase in the money supply.  The Fed bought Treasury securities which increased banks’ holdings of excess reserves, but the money never got lent out and into the hands of consumers and businesses.  But this time is different.  The M-2 measure of the money supply includes checking accounts, savings accounts, and holdings of money market mutual funds amongst other things.  This is where much of the money from the stimulus checks has ended up.  Do we seriously believe that as the virus gets under control and all of us feel more comfortable dining in restaurants, going to bars, traveling, and going to sporting events, that this money is not going to get spent?  We doubt it and, as a result, we are convinced that as the year progresses the economy is going to accelerate and the inflation rate will climb.  How much higher has yet to be determined. 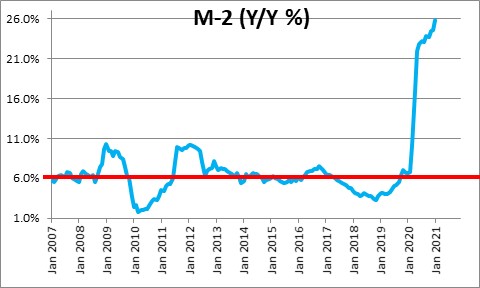 I spent the first decade of my career at the Board of Governors of the Federal Reserve and I have a great amount of respect for the institution and the people that work there.  They are some of the smartest, hardworking people I have ever had the pleasure of working with over the years.  They ignored politics and were willing to take the political heat for making unpopular interest rate decisions.  They did what needed to be done to keep the economy on track.  But for the first time in 50 years I am beginning to lose confidence in the Fed’s willingness to ignore politics.  Monetary policy has shifted from simply achieving full employment and a 2.0% inflation rate, to solving racial and income inequality problems.  The Fed is not well-suited to addressing these broader issues.  It appears to have shifted its monetary policy goals to achieve the political agenda of our progressive leaders in the White House and Congress.  This does not seem like a good idea.  As Powell pointed out, the economy and all workers regardless of race, sex, education, or income level benefit from a prolonged expansion.  The Fed does not have to alter its policy to achieve that objective.  Focus on the economy.