recession, Recession, or RECESSION – Which is It?

Everybody keeps worrying about a “recession”.  That implies all recessions are alike.  They are not.  There are recessions. And Recessions. And RECESSIONS.  They can be barely noticeable (like 2000), or devastating (like 2008-2009).  So while virtually every economist expects a recession in 2023 or 2024, it is less clear the extent of the anticipated downturn.  We are in the “recession” camp — with a little “r”.  A recent article on Bloomberg News noted that what the Fed has done thus far has hammered the housing sector, crushed crypto currencies, whacked the technology sector, and virtually eliminated three emerging asset bubbles with no devastating impact on the economy.  If the Fed were to stop tightening after its presumed 0.5% increase in the funds rate this coming week to the 4.4% mark, they would have successfully deflated these asset bubbles without pushing the economy over the edge.  But the object was never to correct these emerging asset bubbles.  Rather, the Fed wanted to slow the economy to something less than its potential growth rate (presumed to be 1.8%), so that inflation will subside to the Fed’s desired 2.0% pace.  Thus far, the Fed is far distant from achieving either of those goals which means it is likely to keep raising rates.  If that happens, the hope for a soft landing will soon be replaced by a “recession”.  But if the result is a mild recession that lasts the usual 6 months, we should not be too worried.  We are not dealing with a depression.  Nor are we anticipating a repeat of the debacle in 2008-2009. Much of a “recession” with a small “r” is already built into stock prices and the bond market.   Business leaders also expect a moderate recession.   Let’s begin to talk about the extent and duration of whatever recession looms ahead, and look beyond that to the resurgent GDP growth that lies in its wake.

Bloomberg is right that several sectors of the economy have been hit and three emerging asset bubbles have been pierced by the increase in interest rates we have seen thus far.

Existing home sales have fallen 31% from a peak of 6,490 thousand in January to 4,430 thousand in October as both home prices and mortgage rates surged.  But how low might they go?  They fell to about 4,000 thousand in the so-called “Great Recession” in 2008-2009.  At that time home prices had risen dramatically, the Fed was raising rates, and 30% of homeowners had adjustable-rate mortgages.  As short-rates climbed, many homeowners could not afford their new, higher monthly mortgage payments, and were forced to sell.  Bankruptcies soared.  The  housing market  is not even remotely close to that.  Adjustable rate mortgages today are about 10% of the total.  Homeowners have tons of equity in their home.  And homes available for sale are in short supply.  In our view, home sales are unlikely to fall to 4,000 thousand which means the bottom may be in sight.  Home prices have already begun to decline quickly so housing affordability should increase somewhat in early 2023 even if the Fed raises the funds rate to the 6.0% mark by the spring and mortgage rates peak at 7.0%. 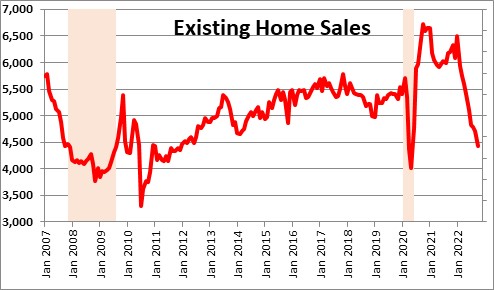 Cryptocurrencies have been hit hard in the past year.  Bitcoin, for example, reached a peak of $65,000 in October 2021.  It has dropped by almost 75% to $17,300.  How much farther will it fall?  We do not know, but Bitcoin is not going to disappear.  Furthermore, the underlying block-chain technology is extremely valuable.  We would suggest that most of the damage has already been done. 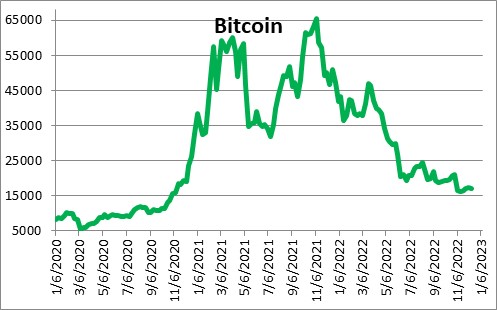 The same is true for the tech-heavy NASDAQ.  All three of the sectors described above have been hit hard and may well decline further if the Fed lifts the funds rate to the 6.0% mark by the spring, but the bulk of the decline is almost certainly behind us. 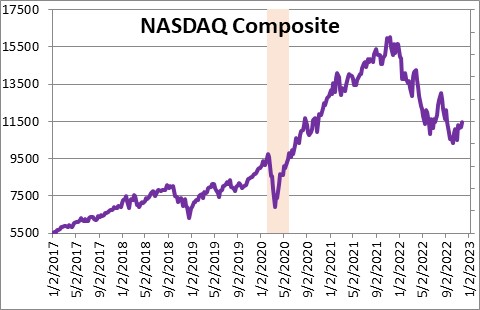 While the declines in these three previously hyperinflated sectors will help the Fed achieve its goals, we have to remember that producing declines in these sectors was never a goal for the Fed.  It wants to slow bring inflation back down to the 2.0% mark.  To do that it needs to slow GDP growth – not just a couple sectors  — to something less than its presumed potential growth rate of 1.8%.  Growth slower than 1.8% would help to reduce the pressure on inflation.

Right now the economy seems to be chugging along at a reasonable pace.  After declines in the first two quarters of 2022, GDP rebounded to 2.9% in the third quarter and is homing in on something around the 2.0% mark in the fourth quarter.  Everybody expects GDP growth to slow to about 1.0% in 2024 but, thus far, it seems to be running hotter than that.  As long as that is the case the Fed has to keep raising interest rates. 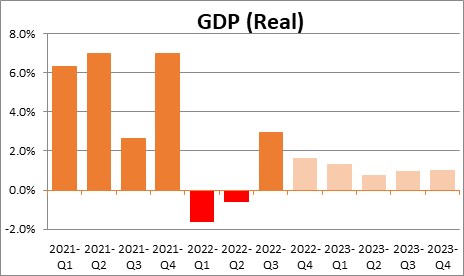 If the real goal is to shrink inflation to 2.0%, that objective is still not even on the radar screen.  The overall CPI index has slowed given the recent decline in energy prices, but with a year-over-year increase of 7.8% it has a long ways to go.  The core CPI is showing little improvement with a year-over-year increase of 6.3% which is where it has been stuck since the beginning of the year.  As long as that is the case there is little room for the Fed to back away from additional rate hikes at each upcoming FOMC meeting. 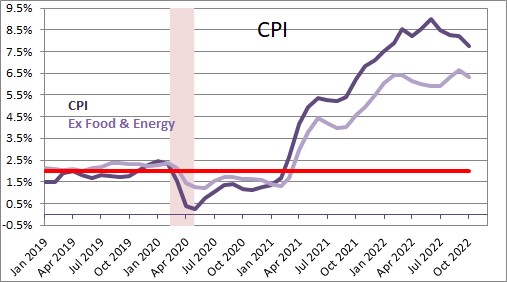 If the Fed continues on and raises the funds rate to 6.0% by the middle of next year and the core CPI drops to 4.9% by that time, the “real” funds rate will be positive at +1.1% which, in our opinion, should finally be high enough to have some bite.  Thus, we expect a mild recession (with an “r”) in the first half of 2024  — largely because there are no additional bubbles to burst.  If it is a relatively mild recession, it should end by the middle of 2024 with only a small drop in GDP in the first half.

Such a scenario will not be a significant setback.  Thus far everybody expects that to happen.  The stock and bond markets seemingly have a mild recession priced in as investors have already pulled back.  Business people are making plans based on the prospect of a mild recession at some point in the not-too-far-distant future.  Do not fret too much about an upcoming recession (with a small ”r”).